Bianca Gonzalez gives her take on ‘unspoken pressure’ to breastfeed

Bianca Gonzalez took to social media to recount what breastfeeding was like for her after daughter Lucia weaned at two years old.

In two posts on Instagram, she admitted feeling “pressured” to breastfeed. “’Til now I don’t know whether I myself was pressured, or it was really something I wanted to do; it could be both.”

The 34-year-old mom of one emphasized that she “would never judge a mother who chose to or who chooses to mix feed or give formula at some point.”

She originally planned to breastfeed for nine months but was able to push it to two years despite the challenges.

“Low milk supply was my number one issue. Then there is lack of sleep, sore nipples, going to work and pumping, wasted milk, the list goes on,” she shared.

When little Lucia stopped breastfeeding, the TV host admitted she felt “emotional for about a week.”

She also had extra breast milk, which she donated to a baby in need. On the other hand, Lucia drinks all kinds of milk–from fresh cow’s milk to yogurt–and was advised that she didn’t need to have formula milk.

The post resonated among many mothers, with over 500 comments in one post. Many shared how breastfeeding was stressful for them, since they were also working moms.

One shared how going back to work depleted her supply due to stress. 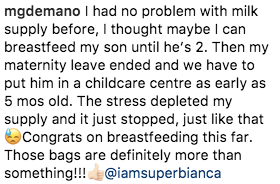 Another said she even resigned from her work to take full care of her child. “Dahil mas mahal pa ang formula sa sahod ko (Because formula milk cost even more than my salary),” she said. 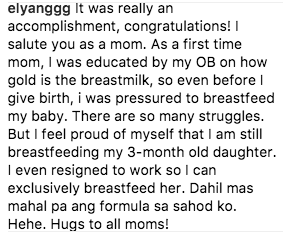 Another shared her sentiments on weaning. “I feel like he’s being independent na, like he wouldn’t need me,” she said.

Gonzalez urged the community of moms in her post, “Motherhood is difficult enough and we definitely could use all the support and guidance we can get from other moms.” /ra

Study: Breastfeeding for at least 6 months cuts diabetes risk in half