‘Seinfeld’ traces comic’s roots, in his own words 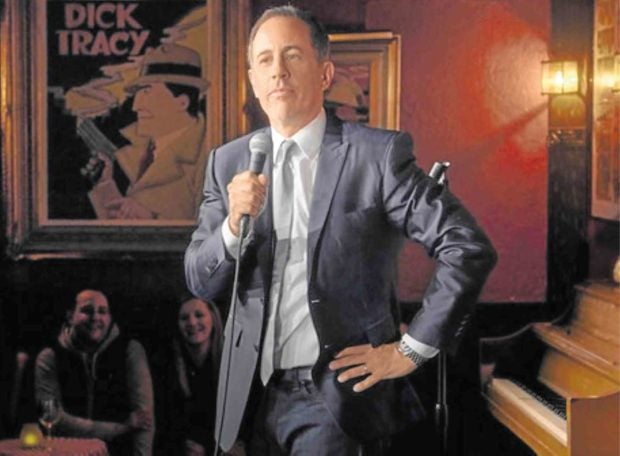 Actor-comedian Jerry Seinfeld recounts his time before becoming a professional standup comic, narrating between scenes from a live performance in Netflix’s “Jerry Before Seinfeld,” and showing his considerable storytelling skills in both serious and not-so-serious scenarios.

“I was sledgehammering walls down for $25 a day,” he says at a New York sidewalk, recalling his time before hitting it big in comedy, which seemed “impossible” when he was 21. “I remember thinking, ‘Even if I’m not any good at it, even if I make just enough for a loaf of bread a week, I could survive. And that could be the greatest life I could have.’”

The hourlong special by Michael Bonfiglio goes directly to the subject for details of Seinfeld’s growth as a comedian. Telling his story in his own words, the popular comic recalls the irreverence of Mad Magazine and other publications when he was a boy, eventually realizing that he wanted to make people laugh, professionally.

In one of his spiels, he even likens living life as a comedian to coming out of the closet, because his parents “didn’t know” he was funny.

“I don’t want to be ashamed of it anymore, and I want to lead a funny lifestyle now—I wanna be with other funny people,” he quips for his audience. “And I was out!”

Supported by video footage of Seinfeld horsing around as a kid, it offers a clear, if uncomplicated glimpse into the comic’s life, whose act became internationally known, thanks to his hit ’90s sitcom, “Seinfeld,” which also had portions of his standup routines.

One joke that was told in the TV show is recycled for “Jerry Before Seinfeld,” about how men are inexplicably drawn to the ruckus of construction tools in their neighborhood, and how such objects somehow help form a bond between guys.

Seinfeld characteristically tells his jokes continuously, segueing skillfully to keep his listeners’ attention. He talks about simpler times one minute, then seamlessly jumps into another familiar topic like binge-watching the next. There’s a variety of things, from his “dislike” of magicians to “growing up like wild dogs in the ’60s.” He elaborates on his childhood, a time when there was “no nutrition … no helmets, no seat belts.” He mockingly teases that his “negligent” parents didn’t know where he was most of the time.

Seinfeld also reveals that comedians “think in minutes,” showing old notes from the 1970s to the present, reiterating the importance of connecting with the audience, through well-timed humor and an art form different from other outlets of expression.

Some audience members in this performance, however, are overly eager, laughing way before the punchlines and even at the unfunny jokes, at times. Still, Seinfeld delivers what’s required of him, as he’s known to, despite the occasional negative response to his observational brand of humor—a reality he learned way back in the ’70s.

“There was heckling and bombing,” he self-deprecatingly tells of his early shows. “And someone once threw a glass at me that shattered onstage. [Some] people [were] interested in a physical fight—
none of it bothered me! I was in comedy. And it just felt like heaven.”