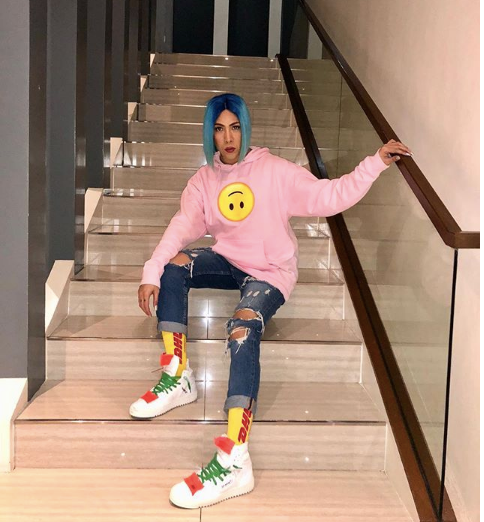 It appears that comedian Vice Ganda has also been influenced by the “Pepedederalismo” jingle, made famous by Presidential Communications Assistant Secretary Mocha Uson and blogger Drew Olivar.

The government official and blogger are currently in hot water over the controversial jingle, which was seen in the duo’s “Good News Game Show” posted on Mocha Uson Blog’s Facebook page last Thursday, Aug. 3.

In the video, Olivar can be seen dancing and chanting the lyrics “i-pepe, i-pepe, i-dede, i-dede, i-pede , pede, pede, pederalismo!” In Tagalog, pepe is a colloquial term for a woman’s genitalia, while dede is the word for breasts.

As if in response to the craze, Vice too attempted to dance to the now-viral jingle in the “PUROKatatawanan” segment of “It’s Showtime” posted online via YouTube on Tuesday, Aug. 7.

Making the audience laugh out loud, Vice then danced while saying “fe-de-ra…” At this point, co-host Jugs Jugueta told him “Wag mong kantahin.” (Don’t sing it.)

The comedian instead sang the lyrics, “Kiki, do you love me?” from Drake’s hit song “In My Feelings”.

While Vice may have sounded subtly satirical about the federalism jingle, several celebrities such as Ethel Booba, Jim Paredes and Ogie Diaz went all out in expressing their disappointment about having the issue of spreading awareness about federalism be reduced to a laughing matter.

Meanwhile, Uson and Olivar stood their ground despite the backlash. The assistant secretary said that she only wants people to talk about federalism, and clarified that the video is not part of the federalism information drive.

(What’s wrong about that? It’s you who are interpreting it as vagina and breasts. You’re the ones who got dirty minds.) Katrina Hallare/JB

Blogger hits back at federalism jingle’s critics: You are just envious