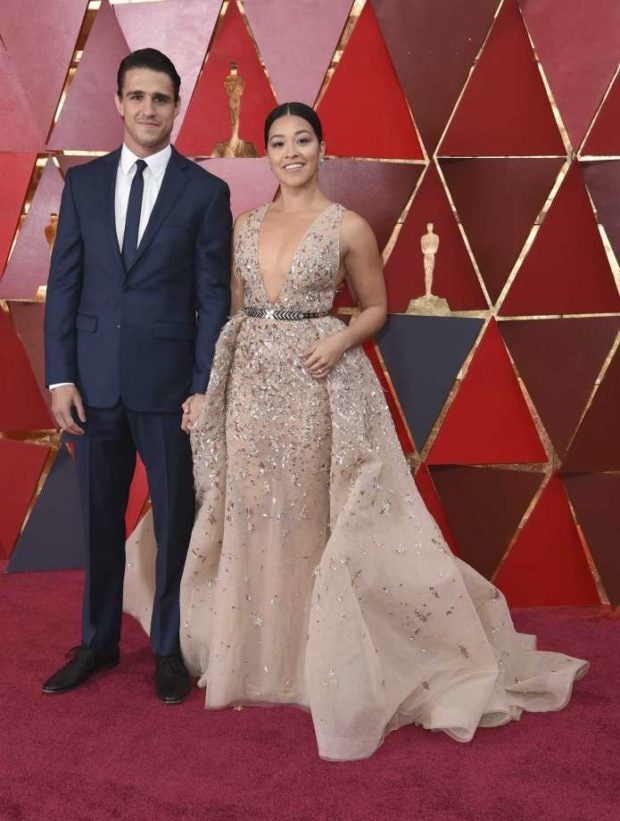 In this March 4, 2018 file photo, Joe LoCicero, left, and actress Gina Rodriguez arrive at the Oscars in Los Angeles. The couple, who are engaged, met when he was a guest star on “Jane the Virgin.” (Photo by Richard Shotwell/Invision/AP, File)

NEW YORK — Gina Rodriguez credits “Jane the Virgin” with many things: changing her career (she won a Golden Globe for her work on The CW series in 2015), giving her a platform for activism and humanitarian work, and leading her to the love of her life.

She is now engaged to Joe LoCicero, who she met when he guest-starred in an episode of the show in 2016.

“I never was the girl that dreamt about my wedding,” said Rodriguez, 34, in an interview Tuesday.

Rodriguez revealed details of their relationship while on a media tour for feminine products company Always. The brand wants to bring awareness to what’s known as “period poverty,” where American girls from low-income families miss school because they don’t have access to menstrual products.

“It devastates me. It breaks my heart,” said the actress.

Rodriguez is returning to work on “Jane the Virgin” this week. She’ll direct the first episode of the upcoming fifth and final season.

She said she knows how the series will end but doesn’t know exactly how the writers will get there. She also said fans of the show are “not getting gypped” by its ending because the creator, Jennie Snyder Urman, always imagined it as a story told in five chapters.

“As much as people are saddened that the show is going to be done after season five … you’re getting the gift of the whole thing. Everything Jennie ever thought of,” Rodriguez noted.

Rodriguez already has a number of other projects in the works, including a live action “Carmen Sandiego” film for Netflix. She has also remade the Mexican movie “Miss Bala,” which is about a beauty contest winner forced to work for the mob after she witnesses a murder.   /kga