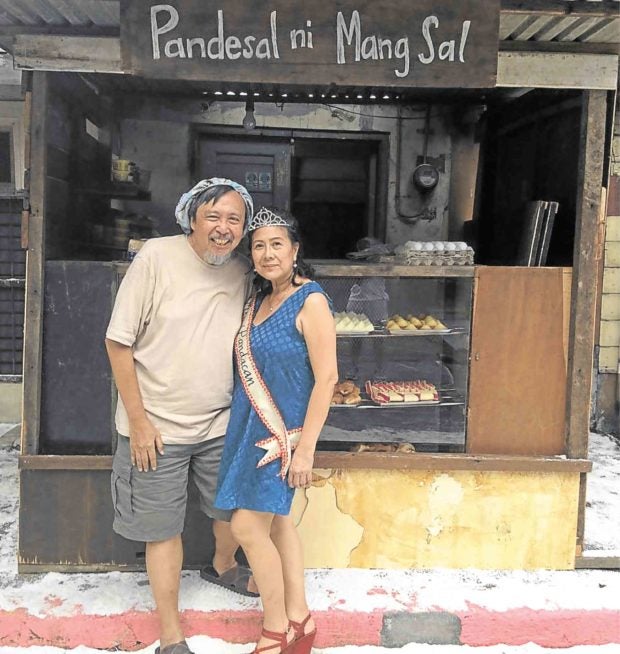 “It’s almost impossible for a nonmainstream actor like me to land a lead role that’s this meaty,” Pascua told the Inquirer.

Pascua, who is more widely known as genial storyteller Kuya Bodjie of the kiddie show “Batibot,” was definitely drawn to his scruffy character, Sal. The role “resonated” with him. “I’ve seen people like him. They rarely talk, but their pain is rather deep. I understood his loneliness, his gloom, and his eventual redemption.”

Nicolas was just as fascinated with her part, Bb. Pilar, a has-been beauty queen. At first, she was apprehensive. “But Che, our director, assured me that I could pull it off.” On her first day on the set, on busy Arlegui, Manila, Nicolas was “both nervous and excited.” “I confided in Kuya Bodjie, and he reminded me
to use my frustrations as an
actress as starting point.”

Being longtime theater colleagues undoubtedly proved beneficial to the actors.

“We actually share a lot of history of disciplined work together,” Pascua explained. “We are like family. The trust is built-in already. Being at ease with coworkers helps a lot in an anxiety-inducing job like ours.”

Nicolas agreed: “It is always good to work with theater friends. I’ve known them for many years already. May camaraderie. We talked about theater, film, our country and some personal concerns. We shared our baon and laughed a lot.”

Such solidarity empowered them to weather the storms during the shoot—literally and figuratively. Nicolas recalled: “One late afternoon, there was a heavy downpour … and our tent got flooded, approximately 3 to 4 inches high.”

They placed their bags and other belongings on the table, raised their feet to avoid getting wet, and stayed inside the tent until the waters subsided. “While waiting, we talked, laughed a bit and even took ‘groufies’ inside the flooded tent,” Nicolas recounted.

It was, quite admittedly, a challenging shoot. “Patience was key,” stated Pascua, who had some scenes shot on a moving train.

“Shooting on the train was fine,” Pascua pointed out. “PNR (Philippine National Railways) allowed us exclusive use of one bagon, one morning trip from Tutuban to Bicutan and back.” Alas, everyone, and everything, had to be packed into that small space. “There was hardly room for us to focus and internalize before a take.”

Just as difficult were scenes set in crowded communities. “Controlling the traffic of passersby was much harder,” Pascua related. “We also had to stop when a train or trolley would pass by.”

Nicolas looked back: “During our scenes on the street, we stopped and some equipment had to be moved whenever a vehicle passed through since it was the only way in and out of that eskinita.”

Pascua noted that the residents had become used to film shoots in the area. Some of their comments were amusing, he reported. “Whenever they would see the cast, the fans would express their disappointment: ‘Oh, they are not popular! They’re not handsome!’”

Still, they prevailed, against all odds, because of the script, which was described by Ruiz as “beautifully written.” “I really liked the material,” Ruiz quipped. It tells the story of “different odd characters from a small neighborhood, a functional community with various ‘dysfunctional’ characters.”

Soliman remarked that beyond the script, he was also attracted to the idea of collaborating with the entire team. “The idea of participation … the act of being woven into a tapestry … to weave my being into the anatomy of a story being told.”

Pascua acknowledged that the film is “hard to classify.” “Told like a fable, with an air of innocence, it is also edgy and quirky at the same time. It believes in miracles, but embraces the dark reality of life’s absurdities.”

Nicolas asserted: “The film is a metaphor for what is happening today. Our country is sick, and we’re all hoping for a miracle to happen.”

In these desperate times, an artist’s role couldn’t be more crucial. “We get affected by the things around us. I find it more and more difficult to laugh at political jokes nowadays. I know that I can do something for our country by not being silent and by telling relevant stories through films and plays,” she said.

Pascua insisted that the film has “no political undertones or pretensions.” It asks existential questions, he argued. “How to affirm life in the midst of pain. But it’s told in a fun way. Maybe that is the film’s politics: How to liberate ourselves, as individuals and as a community.”

Cinemalaya is ongoing at the Cultural Center of the Philippines and selected Ayala Cinemas until Aug. 12.