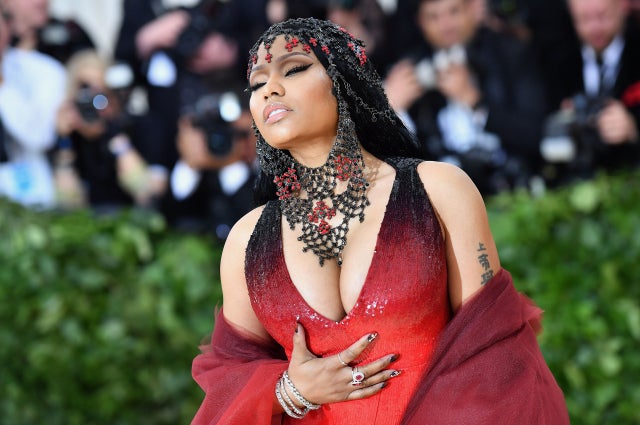 Rapper Nicki Minaj said Wednesday that she is pushing back her new album as she desperately seeks to reach Tracy Chapman to clear a sample. Image: Angela Weiss / AFP

Chapman, the deep-voiced and intensely private folk singer behind socially conscious songs such as the 1988 classic “Fast Car,” has pulled off the increasingly rare feat of being nowhere to be found online as Minaj pleaded via her 20 million followers each on Instagram and Twitter.

In a tweet this week that she later deleted, Minaj wrote that a song on her upcoming album, “Queen,” features one of “the greatest rappers of all time” but that she had “no clue it sampled the legend #TracyChapman.”

Minaj, whose album will be her first in four years, proceeded to poll her followers to ask whether she should delete the track or delay the album.

The latter option apparently won. Writing on her Apple Music account on Thursday, Minaj said the album would come out August 17. She earlier had announced it for June and then pushed it back to August 10.

Minaj also posted a text conversation conducted through a fan in which Chapman is offered $2 million to grant permission in time for an August 10 release.

Chapman, 54, has said that she has no desire to spend time on social media.

A number of fans voiced offense at Minaj’s full-court push.

“I can’t believe that this is the kind of disrespect that Tracy Chapman is getting for merely not replying!!” tweeted one user with the handle @nasque.

Minaj did not specify the rapper behind the supposedly obscure Chapman sample but her praiseworthy tone led fans to think she was referring to Eminem. The two rappers have suggested in flirtatious public remarks that they may be romantically involved.

Chris Brown, the singer and rapper controversial over his history of domestic violence, sampled “Fast Car” in his song “Run Away.”

Minaj, one of the top women in hip-hop, has already released three songs from “Queen” including “Bed,” a tropically infused, sexually charged duet with pop singer Ariana Grande, and “Chun-Li,” a nod to Asian martial arts and video-game culture. AB