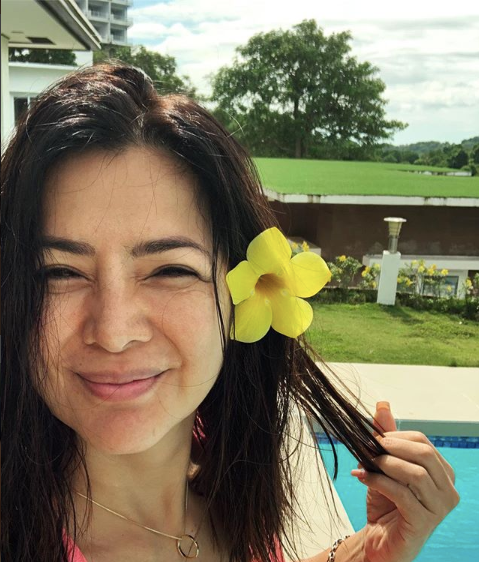 Alice Dixson celebrated her 49th birthday dancing at and touring Boracay yesterday, July 28, despite the island being temporarily closed to tourists.

“My 1st picture – the morning of my birthday July 28, 2018 as I turn 49!!! This is what 49 looks like!” wrote as she posted on her Instagram page a photo of her wearing a pink top. The beautiful bare-faced actress also wore a yellow flower in her ear, which was supposedly given by Blondie, her yellow Labrador retriever. “Help me find a new hashtag. If #48isGreatwhat’s49? #nomakeup #noproblem.”

Not long after, she shared a video of herself dancing to an upbeat song apparently taken after her surprise special breakfast. “This is my happy birthday dance!” said the actress.

Taken around 9am today after my special surprise breakfast. This is my happy birthday dance! I’m 49 today 😁

Aside from the enjoying her dance and special breakfast, Dixson also took the time to tour the currently-closed Station 3 of Boracay.

Iconic spots @ station3… wonder what it l👀ks like during the closure? Here it ‘tis

“The day after,” stated Dixson. “Yes that’s my dog running [and] my big legs in the video [laughs]… was trying to show off the super soft sand.”

The day after… Yes that’s my dog running & my big legs in the video haha… was trying to show off the super soft sand. Thank you for all the greetings; so so many! I love 💕 love u guys 💕 Will pick a hashtag soon 😘 Happy Sunday y’all

Boracay was closed in April 26, to give way to the rehabilitation of the island. The shutdown is scheduled to last for six months.

While most fans wished her well on her birthday, a few commenters wondered how Dixson was able to celebrate her birthday in Boracay when it’s supposed to be closed to tourists. One netizen went as far as to ask if there is favoritism involved in her stay in the island.

One commenter, Yumi (@itsmeyumi05), voiced out her opinion on how the actress was able to get in the closed-off island. She commented that Dixson probably has a local barangay I.D., company I.D. or terminal I.D. for her to gain entrance to Boracay.

Alice Dixson first earned fame for playing the role of Faye in the television series “Okay Ka, Fairy Ko!” She also played the title character to the classic 1990 film adaptation of the Mars Ravelo comics classic “Dyesebel”. At the age of 49, Dixson manages to stay fit and agelessly beautiful, landing her various commercial endorsements from food to beauty products. JB

Alice Dixson, Aga Muhlach to star together in a movie

No temporary freedom for Gigi Reyes as Sandigan rejects her plea