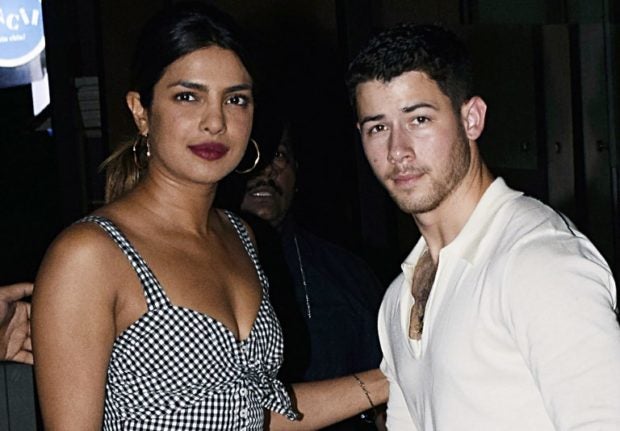 (FILES) In this file photo taken on June 22, 2018, Indian Bollywood actress Priyanka Chopra (L) and US singer Nick Jonas stand together in Mumbai. Chopra is engaged to Jonas after a whirlwind two months of dating, People magazine, citing unnamed sources close to the pair, reported on July 27, 2018. Image: AFP photo

People magazine, citing unnamed sources close to the pair, said Jonas, 25, proposed to Chopra in London for her 36th birthday after shutting down a Tiffany store in New York to choose a ring.

Representatives for the two stars did not respond to requests for comment.

But director Ali Abbas Zafar appeared to allude to the engagement when he announced that Chopra was leaving the film “Bharat,” a historical drama about modern India.

“The reason is very very special,” he tweeted. “She told us in the Nick of time about her decision and we are very happy for her.”

Chopra, who won the Miss World pageant in 2000, has become one of Bollywood’s most identifiable stars and, more recently, one of the few to achieve success in the West.

She has starred in the thriller series “Quantico” on US network ABC and, in her career as a singer, has released songs with U.S. chart-toppers including Pitbull and The Chainsmokers.

Jonas first found success as a child as the frontman of The Jonas Brothers with his two siblings.

Also an actor on theater and in television, Jonas returned to music as a young adult with a new, mature image and has often been seen as a sex symbol. He has been romantically linked to a number of prominent women including Miley Cyrus and Selena Gomez.

People magazine said that, while Jonas and Chopra have known each other for some time, they began dating just two months ago and the relationship was serious enough that she introduced him to her mother in India. MKH