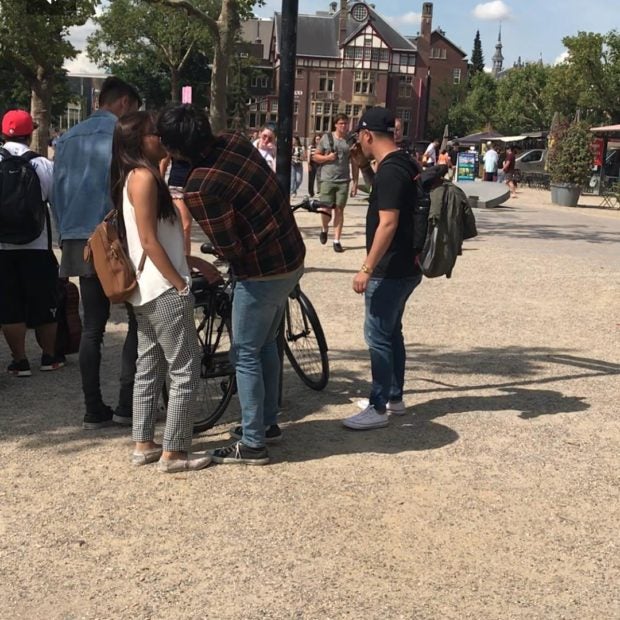 An eagle-eyed fan captured a sweet moment between a couple who appeared to be on-screen love team Daniel Padilla and Kathryn Bernardo.

The actors are filming their upcoming movie “The Hows of Us” in Amsterdam, the Netherlands.

The pair appears to be in a liplock, with the man in a plaid shirt, supposedly Padilla, bending down to reach the woman who is allegedly Bernardo.

The netizen excited Kathniel fans further after posting a video of the two together while they seemed to have been in a world of their own.

They appeared to have kissed at one point, although the camera shifted so it was not clear whether they indeed locked lips. Not long after, they are seen wrapped up in each other’s arms.

One may doubt that the two in the photo and the video are indeed the Teen King and Queen.

The Kathniel fan posted a photo of himself with Bernardo prior to sharing the photo and video. It is worth noting that they are wearing the same clothes in photos with the fan as in the kissing photo and video.

Even though it was not clear whether the on-screen couple was filming for “The Hows of Us” when the sweet moment was captured or whether their “kiss” was indeed a kiss, fans were quick to comment on the kilig they felt upon seeing the photo and watching the video.

Daniel Padilla and Kathryn Bernardo had their first on-screen kiss in their 2016 film “Barcelona: A Love Untold.” Meanwhile, “The Hows of Us” is slated for release on Aug. 29. NVG

LOOK: Kathryn Bernardo, Daniel Padilla in Indonesia to shoot for ‘The Hows of Us’