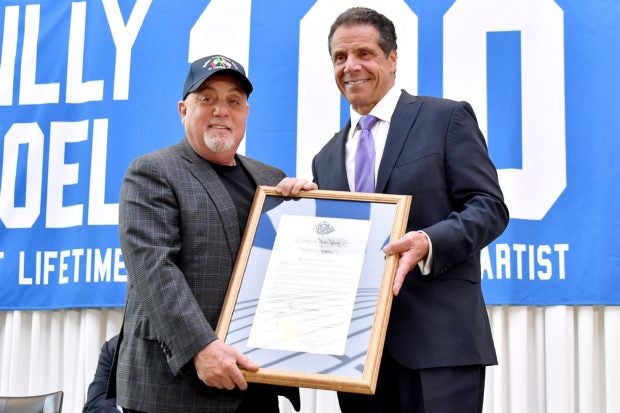 New York, United States – New York feted Billy Joel on Wednesday as he played a record 100th concert at Madison Square Garden, although the Piano Man himself was modest about his achievement.

“Let’s be real – I’m from New York,” the 69-year-old engine of pop favorites, donning a baseball cap, told a news conference ahead of his 100th performance at the Midtown Manhattan arena.

“This is my venue. Fortunately for me, Madison Square Garden is a world venue. You can play almost any other arena in the country and nobody else in the world is going to know about it,” he said.

“So I’m very fortunate just because of where I’m from – not to take the shine off of it,” he added.

More than two million people have seen Joel at Madison Square Garden, according to the iconic venue. He has cruised past Elton John after surpassing the English legend’s record when Joel performed his 65th show in 2015.

Cuomo called Joel a “quintessential New Yorker” who embodied the values of the city’s middle class.

“Forty years in this town, which is one of the toughest audiences on the globe, and after 40 years, the same tough, hometown crowd loves him,” Cuomo told the news conference.

“Why? Because there is an authenticity about Billy and his music. You can’t fool New Yorkers for 40 years,” he also said.

With a stream of hits from “Uptown Girl” to “We Didn’t Start the Fire,” Joel has sold more than 150 million records around the world, according to his representatives.  /kga