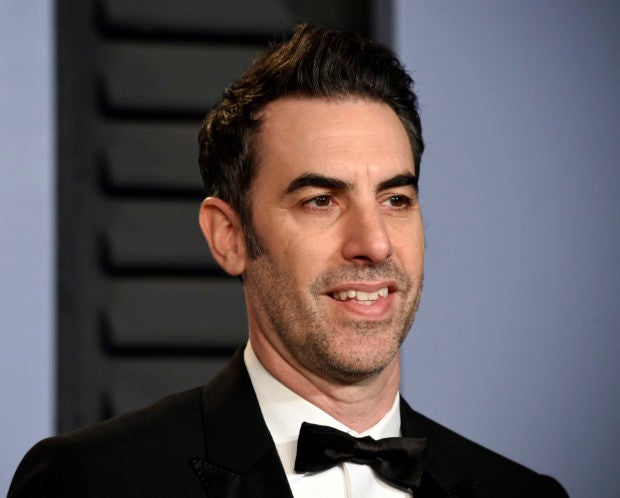 NEW YORK (AP) — The provocateur Sacha Baron Cohen has rebooted his ambush chat show and before any judgment is made about the wisdom of that decision, you have to admire the sheer perseverance of not only the host but also his so-called guests.

Fifteen years after the British comedian leapt to America as an unknown cultural trip-wire to punk everyone from Donald Trump to Edwin “Buzz” Aldrin, he’s still befuddling folks who should really know better.

The first episode of Showtime’s “Who Is America?” somehow snared former presidential candidate Bernie Sanders and former Republican senator Trent Lott, neither apparently too savvy to sit opposite a dubious dude who is either spectacularly ill-informed or perfectly like-minded.

The first episode — the only one Showtime allowed journalists to talk about — follows Baron Cohen’s tested formula: Create a bunch of off-the-wall characters with prosthetics and accents then set them loose on the unsuspecting public, either wing-tipped or rednecked. Truth be told, the second episode of “Who Is America?” is better than the first, with the upcoming humiliations of some public figures absolutely astounding.

On “Da Ali G Show” from 2000-2004, Baron Cohen played a dim, wannabe gangster; an anti-Semitic correspondent from Kazakhstan; and a gay Austrian reporter. This time, his characters include a far right-wing moron; a gung-ho Israeli anti-terrorism teacher; an ultra-liberal who cycles around in a ponytail and an NPR T-shirt; and an ex-con skinhead with a biker beard.

Over two episodes, the show proves uneven — best when it toys with those in power and less so when it goes for a cheap laugh from the frivolous. A trip by his left-wing character to a fancy candlelit dinner with staunch conservatives in South Carolina felt flat in comparison to the sheer mischief Baron Cohen gets into as the Israeli character when trying to get gun-rights advocates to endorse his notion of arming preschoolers.

That’s always been the genius of Baron Cohen’s format: seeing how far he can coax someone down the rabbit hole. This time, he gets grown, intelligent — and sometimes elected — men to back a fictional program called Kindergardians, in which kids as young as 4 are trained to shoot guns decorated as stuffed animals (like the “Uzi-corn” or the “Dino-gun”).

So we get the sight of Rep. Dana Rohrabacher, former Rep. Joe Walsh and the twin gun rights activists Larry Pratt, of Gun Owners of America, and Philip Van Cleave, of the Virginia Citizens Defense League, duped into parroting prepared text on a teleprompter that “first-graders make good first-grenaders” and aiming a gun at the screen while singing a twisted version of the nursery song, namely “Head, Shoulders, Not the Toes, Not the Toes”.

Showtime has been tight-lipped about the seven-episode series, to the point of asking journalists who see the show to sign non-disclosure agreements and place their phones in locked cases. Security guards scanned the room with night-vision goggles during a recent screening. (Showtime might embrace free speech but they’re happy to limit it, too.)

Yet in a reminder that even the best laid corporate plans unravel, the network’s own promotional department has revealed that former Vice President Dick Cheney features in a future episode, somehow convinced to add his friendly autograph to a jug used for waterboarding.

And we know that Sarah Palin, the former Republican vice-presidential candidate, admits that she too was duped, saying on Facebook she had fallen victim to Baron Cohen’s “evil, exploitive, sick ‘humor.'” Add defeated Senate candidate Roy Moore to that list; he was enticed to a sit-down with the promise of an award for being a friend of Israel.

It’s remarkable that anyone still falls for this bait-and-switch and so give credit to Baron Cohen’s team for still beguiling politicians — some, admittedly, not so relevant any more — to their doom. Conservative provocateur James O’Keefe has to smuggle his cameras in, but Baron Cohen uses his as a lure. They keep coming despite the baton he dropped being taken up by the likes of “Daily Show” and “Full Frontal” correspondents. Why anyone sits for a TV interview anymore is a mystery.

Baron Cohen and his team are like those weird fish in the deep dark that dangle a light to attract prey. They play to vanity but end up with something truly grotesque. His victims often try to ingratiate themselves with the host’s racist jokes or play into his stereotypes a little too easily. It’s a honed technique: Baron Cohen was trolling people before trolling was a daily thing. He was creating “fake news” before that was in vogue.

“Who Is America?” — like his previous show — offers no moments of truth when the hunted, led to the extremes by a stranger with funny facial hair, finally realize that they are in a logical pretzel and suddenly comprehend the consequences of their thinking.

No, Baron Cohen isn’t interested in confronting his subjects head-on or breaking them like “60 Minutes”, only mining the absurdist humor of those who are absolutely certain they are right.

Many of his targets will forever rue the day they agreed to sit down with this shape-shifter, this tempter who brings out their worst side under the camera’s glare. But, they have only themselves to blame. He was, after all, hiding in plain sight. CC

Sacha Baron Cohen as himself is just as outrageous