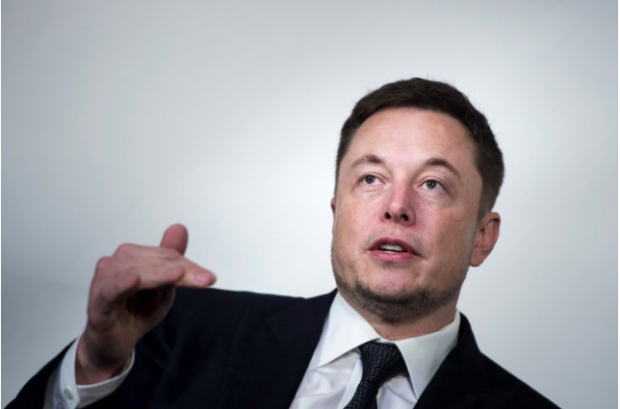 Elon Musk fired at British cave explorer Vern Unsworth after the latter called Musk’s kid-size submarine a PR stunt. Last week, the youth football team which got stranded inside a flooded cave in Thailand was finally rescued, thanks to the help of international rescue divers and Thai navy SEAL divers. Unsworth was a part of the team who helped rescue the boys in the cave.

Musk, too, wanted to help with the rescue by building a kid-size submarine made with rocket parts. Despite his efforts, however, Musk’s submarine was deemed impractical for the rescue.

Musk’s Twitter rant was triggered when Unsworth was recently asked in a CNN interview what he thought of Musk’s submarine idea. Unsworth, no holds barred, said that Musk can “stick his submarine where it hurts.”

His remarks were shared on Twitter by a certain Rex Kramer (@RexDangerSeeker) who shared screenshots of Unsworth’s interview last July 13.

“It just had absolutely no chance of working. He had no conception of what the cave passage was like,” Unsworth said in the interview. “It wouldn’t have made the first fifty meters into the cave. Just a PR stunt…”

CNN now takes you to Vern Unsworth, a a member of the Thai rescue team and an expert in dragging. pic.twitter.com/WDzCnwn1VY

Musk didn’t seem pleased with Unsworth’s statements and took to his Twitter page to air out his grievances. His tweets have since been deleted, although screenshots of them are still circulating around social media.

“Never saw this British expat guy who lives in Thailand (sus) at any point when we were in the caves,” wrote Musk in his now-deleted tweets yesterday, July 15. “Only people in sight were the Thai navy/army guys, who wee great. Thai navy seals escorted us in — total opposite of wanting us to leave.”

Musk continued, “Water level was actually very low [and] still (not flowing) — you could literally have swum to Cave 5 with no gear, which is obv how the kids got in. If not true, then I challenge this dude to show final rescue video. Huge credit to pump [and] generator team. Unsung heroes here.”

Musk then followed his tweet with another, saying, “You know what, don’t bother showing the video. We will make one of the mini-sub/pod going all the way to Cave 5 no problems. Sorry pedo guy, you really did ask for it.” 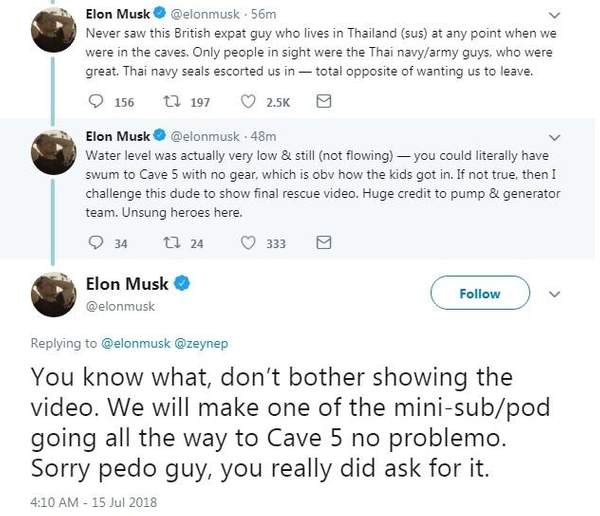 Musk replied to the netizen yesterday, July 15, and said, “Bet ya a signed dollar it’s true.” 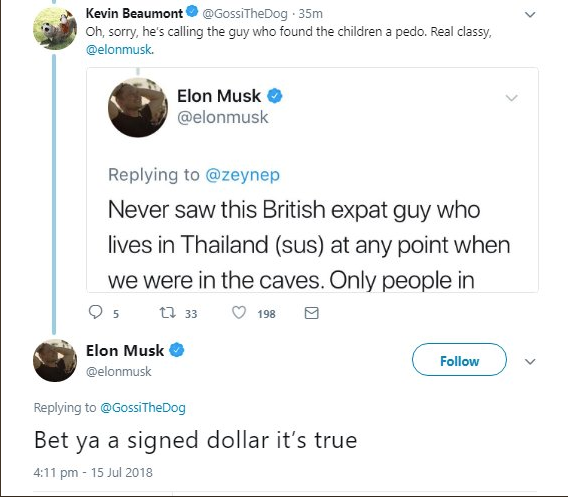 Others have since called out Musk for his disparaging tweets.

Sociologist and writer Katherine Cross tweeted yesterday about it, saying, “To be completely clear about the ‘Elon Musk calls real life hero a pedo’ thing: he not only said this, but doubled down on it. He is a wastebasket and if you [stand] for him, you should feel Very Very Bad.”

To be completely clear about the "Elon Musk calls real life hero a pedo" thing: he not only said this, but doubled down on it. He is a wastebasket and if you stan for him, you should feel Very Very Bad.

Taylor Nichol, a former Herald journalist, had sharp words for Musk too.

“If I were Elon Musk I would avoid slinging about pedo as an insult given his dad literally had a baby with his own stepdaughter,” wrote Nichol.

Elon Musk’s father, Errol, who is 72 years old, is reportedly fathering a baby with his own stepdaughter Jana Bezuidenhout.

is elon musk gonna acknowledge deleting the pedo tweet or

Meanwhile, Matt Nipert, a journalist of the New Zealand Herald, wrote that it doesn’t take rocket science to know how to respectfully interact with others.

“If there’s one thing the Elon Musk and the submarine saga has taught us, it’s that respectful social interactions aren’t rocket science,” wrote Nippert.

If there's one thing the Elon Musk and the submarine saga has taught us, it's that respectful social interactions aren't rocket science.