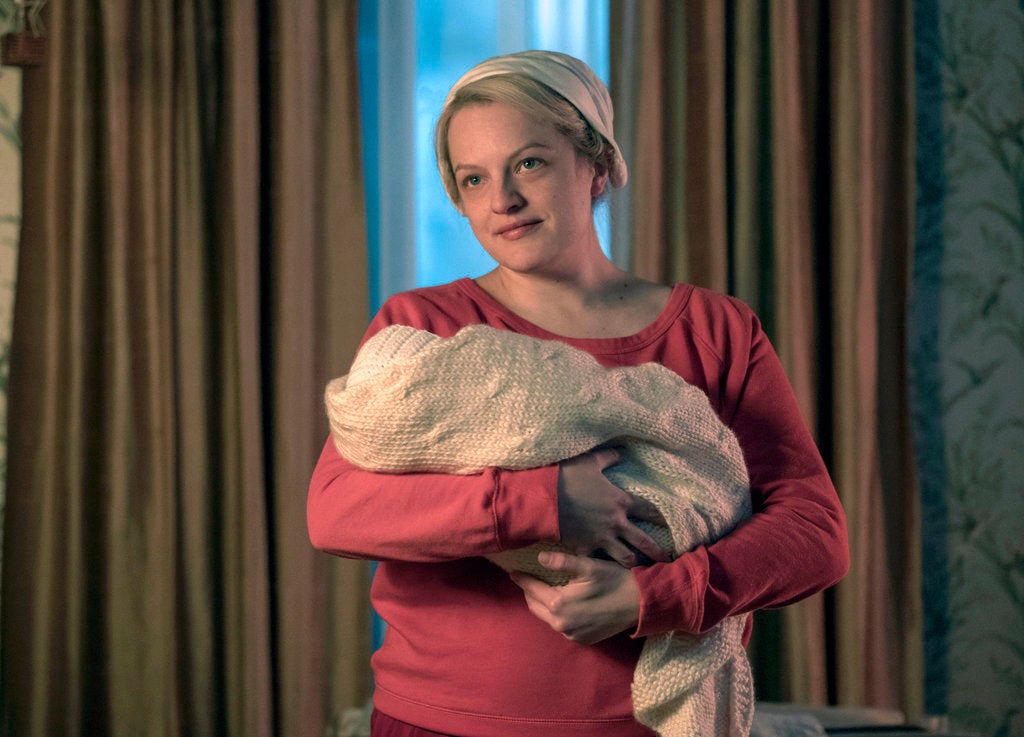 This image released by Hulu shows Elisabeth Moss in a scene from “The Handmaid’s Tale.” Image: George Kraychyk/Hulu via AP

If you haven’t yet watched this week’s roller-coaster finale of “The Handmaid’s Tale” — no spoilers here — the show’s creator has a suggestion.

Miller and his cast and crew were saying “Praise be” — figuratively, at least — on Thursday as the show reaped 20 Emmy nods, up seven from last year, when the show took the prize for best drama series. Not surprisingly, the show’s star, last year’s best actress Elisabeth Moss, was nominated again, as were seven other actors in supporting or guest roles.

One of them — Samira Wiley — learned of her Emmy nod onstage as she announced other nominees. Television Academy chairman Hayma Washington came out to give her the news.

Wiley called the show’s big haul “a real graduation” from the year before. And she had high praise for Moss. “Elisabeth makes everyone who she’s in a scene with a better actor,” she said. “And I can speak personally about that. I don’t know how she does what she does.”

Miller, nominated as a writer as well as executive producer of the dystopian sci-fi drama, noted that while many viewers have drawn parallels with real-world current events, he tries to keep the focus on the show’s main character, Moss’ June, and her world in Gilead.

“You want to be in the world, so you know when you do a show and talk about people being separated from their children, what that’s going to mean to people in the world,” he said. “We’re all news junkies, political junkies, but I think we really try to think about what happens to June and what happens in Gilead, and really make that work, and then you have the chance that people apply it to their life today.”

The best guide, he said, has been the writing of Margaret Atwood — the Canadian author of the 1985 novel on which the series is based.

“The reason the book lasted so long is that it’s specifically about this woman and this world, and (though) not a conscious metaphor for our world, it just seems to keep applying to our world,” Miller said. “That’s the genius of Margaret.”

And, even though the show goes well beyond what’s in the book, he said, “the world that Margaret has created is so complete and full that in some ways, I don’t feel that we’re ever going beyond the book, I feel like we’re just pushing it to different edges and corners and dynamics that are set up by the book. In that way I feel safe and guided by Margaret … I feel confident that what I am doing, even if it’s not written on the page, is written between the lines.”

“The Handmaid’s Tale” aired its second season finale this week — an episode with a shocker ending that capped an equally intense season. Wiley, who plays Moira, said she hadn’t brought herself to watch yet.

“Hearing everyone’s reaction, I think that it is exactly what we wanted,” said the former “Orange is the New Black” actress. “It’s a big show. There are a lot of issues. It’s been hard this season I think for some people to watch. But hopefully it just sets it up for us to come back next year with a bang as well.” NVG

Elisabeth Moss dishes on Season Two of ‘The Handmaid’s Tale’