Elisabeth Moss dishes on Season Two of ‘The Handmaid’s Tale’ 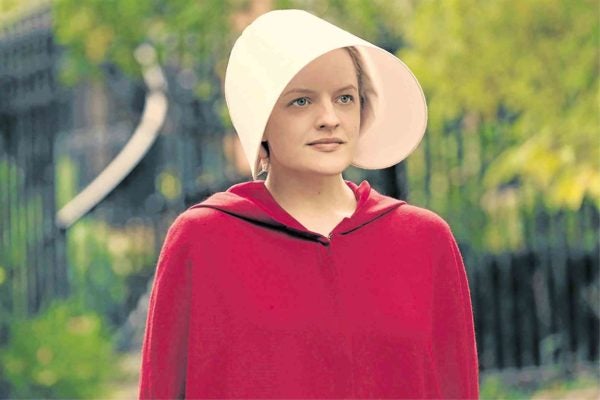 Elisabeth Moss as Offred/June in “The Handmaid’s Tale.”—PHOTO BY HULU

LOS ANGELES—June/Offred will be “more brave and outspoken” and “super ballsy,” Elisabeth Moss says about the transformation of her character in Season Two of “The Handmaid’s Tale.”

The web series is Hulu’s adaptation of the novel of the same name by Margaret Atwood, who wrote it in 1985. But many have cited the show’s relevance in these times when a US president is seen as misogynistic and the #MeToo movement is rising.

Set in a dystopian future in the United States, ruled by a new totalitarian government called Gilead, “The Handmaid’s Tale” takes place after a Second American Civil War.
Fertile women, called “Handmaids” (including Elisabeth’s June Osborne, who is renamed Offred), are forced into sexual and child-bearing servitude and wear a uniform of blood-red dress and oversized white bonnets.

Bagging an Emmy and a Golden Globe best actress-drama series for the role, Elisabeth is excellent in her portrayal of June, who tried to escape Gilead with her husband Luke (O-T Fagbenle) and daughter Hannah (Jordana Blake). But June is captured and becomes a Handmaid to Commander Fred Waterford (Joseph Fiennes) and his wife, Serena Joy (Yvonne Strahovski).

But at the end of the series’ Season Two trailer, Elisabeth’s character tantalizingly intones, “My name is June Osborne. I am free.”

Sometimes, the way that is the most helpful and is going to achieve the most change surprises you. June and the audience go into Season Two with this idea of what she needs to do to achieve not only her own freedom, but freedom for her family and for Gilead.

It’s also about something that Aunt Lydia (played by Ann Dowd) says, which is “Gilead is within you.” It’s true of Moira (Samira Wiley), Luke and many of our characters in Gilead that no matter how much you fight, and even if you get out, what has happened has changed you and it stays with you. June discovers that, as well.

Of course, there’s the pregnancy. It’s basically this time bomb that’s growing inside her because as soon as she has that baby, it gets taken away and she might die.

So that pregnancy is definitely a huge presence through almost the entire season. That a child is growing within her and it’s a constant reminder of what she is fighting for and also what she could lose.

What is your understanding of this love relationship between June and Nick (Max Minghella), especially since she knows that her husband Luke is still alive? Of course, Luke is her husband and is the father of Hannah. June loves him and always will. Obviously, there’s the thing that she thought he was dead, etc. But now, she has been through a war, and she’s been somewhere that Luke may never understand, having not been ever in Gilead.

Nick does understand. So, there are these two people who have been through a war together, and they understand things about each other that nobody else will. There’s also the element of you having to grab love where you can find it in Gilead. And she has found that in Nick.

Obviously I am 50/50. I love them both (laughs). And June is 50/50, too, honestly. It’s a little more complicated, given the whole “Handmaid’s Tale”/ Gilead thing, than a normal love triangle (laughs).

How is that relationship between Commander Fred, his wife Serena and June going to develop in this new season, especially since June is now pregnant with Fred’s child? Women are becoming the bane of the Commander’s existence, honestly (laughs). There’s a lot more of that in Season Two. We talked a lot about this in Season One as well—the power of women when they band together, don’t turn against each other and that they actually support each other, is pretty extraordinary.

The relationship between Serena and June goes places that people are going to be surprised by. It’s been a wonderful experience.

Can you talk about the timing, because the show is streaming during the rise of the #MeToo movement? For June, one of the hardest things was looking at Serena and just wanting to say like, “What is wrong with you? How can you do this to one of your own? And how can you stand there and watch this being done to a woman and support her being raped every month?”

And I don’t think Serena ever understood that and never will. The two of them together could be more powerful than anything. And we do play with that a lot in Season Two.

But it’s very complicated and Serena being one of the engineers of Gilead, her wanting a baby and the position that she is in, it’s not that simple. It’s not like we move in together, get a studio apartment and have wild adventures (laughs)….

Joseph doesn’t get teased? Not at all. We adore him. The thing is, he’s the nicest, most loving of women and a feminist. He is the most intelligent and sweet person. He’s so the opposite of Fred (laughs). Thank God.

How will June/Offred evolve in Season Two? One of the things that June does in Season Two, which has been fun for me, is that thing of suppressing your emotions, is almost nonexistent in Season Two. She is so much more brave and outspoken.

She says what she thinks, and she doesn’t think too much about what she’s going to do or say. She just says or does it. And she’s gotten super ballsy in Season Two, and that has been really fun for me to do.

Bruce Miller, the show’s creator, said that we live in pre-Gilead times. Do you agree? Keep watching the show (laughs). I think we do live in a pre-Gilead time. Hopefully, it doesn’t go there. But it is often strange and scary for us when we’re shooting something in the show, and it directly ties into with something that is happening in real life. It’s bizarre and horrifying.

But the fact that people are able to still express themselves, communicate, protest, band together and have a voice, ACLU, be able to defend their rights in court and have a separation of Church and State—all of those things are really important.

We continue to fight for them as long as we’re allowed to, and as long as we are allowed to make a show like this, Margaret Atwood is allowed to write a book like that, there’s hope. It’s when you cut off people’s voices that we are going to have a major problem.

Are you used to wearing the same costume again and again by this time? I am used to it. I got to wear some different things this year, though (laughs).