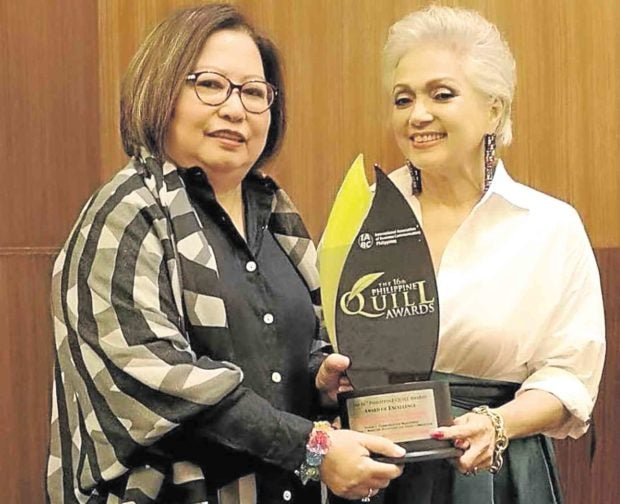 Now on its fourth year, the Asean fest featured Christopher Gozum’s “Dapol tan payawar na Tayug 1931” and Shireen Seno’s “Nervous Translation” in the main tilt, where they competed with eight other films from the region.

Gozum told the Inquirer: “It is good to hear that a Filipino production, specifically a Pangasinense film, was part of a festival made exclusively for cutting-edge Southeast Asian movies.”

For Seno, the Bangkok fest was a homecoming of sorts for her film. She related: “I was happy to show our film to the Thai audience. Four years ago, the film was part of the Produire Au Sud workshop, which was held in Bangkok and focused on project development, pitching and international coproductions.”

Culturtain Musicat Productions, the newbie firm behind the acclaimed big-screen musical “Ang Larawan,” won the Quill award for Professional Excellence in Marketing, Advertising and Brand Communication, handed out by the International Association of Business Communicators Philippines.

Singer-actress Celeste Legaspi, the driving force behind Culturtain Musicat, told the Inquirer that the award is “important” for the “Larawan” crew because “it is a confirmation of our efforts to reach out to a new exciting, emerging market for films that embrace excellence in content and production.”

It has always been the company’s goal to present “cultural” treasures, like the Nick Joaquin classic (that boasts music by Ryan Cayabyab and words by Rolando Tinio), in an “entertaining” package, Legaspi explained.

Costar Rachel Alejandro agreed: “We’re grateful for all the prestigious awards our film has received, but the Quill … is special in the sense that it recognizes the hard work, creativity and dedication of our marketing team in promoting this passion project to the audience that we wanted to reach the most: young Filipinos.”

After its run at the Metro Manila Film Festival, where it won best film, Loy Arcenas’ “Ang Larawan” was shown to appreciative audiences in different schools and universities all over the country.

‘An art and a science’

Producer Girlie Rodis related that almost 900 entries had been submitted and only 300 were deemed worthy by Quill jurors, who are “veterans in the fields of PR, marketing and communications.”

“It was very heartening,” Rodis explained. “We learned a lot during the process. Movie PR is an art and a science, and very demanding; it’s good to be recognized by the best in the field of public relations.”

Producer Alemberg Ang admitted: “It has always been a challenge to get films like ours reach its audience. We studied what past indie films have done and tried to assess which ones were successful. Hopefully, this bodes well for independently produced films like ours in the coming years.”