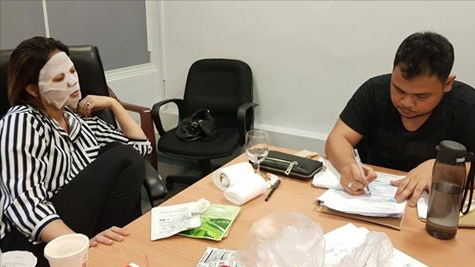 Liza Diño clarifies that the viral photo of herself wearing a face mask at work was staged, and that she had done it to poke fun at herself for her staff’s sake after a “16-hour day at work.” Moreover, the chairperson of the Film Development Council of the Philippines (FDCP) tells netizens to instead focus their “energy” on more “productive matters,” like the upcoming Pista ng Pelikulang Pilipino 2018.

“Multitasking” — that is how Diño described herself in the photo she uploaded in her Facebook page, supposedly taken while she was presiding a meeting at 2 a.m. After receiving criticisms about her unprofessionalism, Diño took to the same platform last Friday, June 6, to air her side of the story and clear up assumptions.

“[First] I had that photo of me taken which I myself posted on my personal FB account. It wasn’t a stolen shot of an actual ongoing meeting,” said Diño. “[Second] It wasn’t an ongoing official meeting.”

Diño reiterated that the said photo was staged: “[Third] The photo was AFTER an internal meeting with my staff and we were all about to clean up and go home after a 16-hour day at work. So we can end on a happy note, I put on the facial mask (I brought home masks for everyone from my vacation) to humor them (cause it isn’t illegal to try to poke fun at yourself once in a while) then took it off right after the shot was taken. (Imagine how hard it would have been to sit through hours-long discussions with that thing on my face.)”

“[Fourth] Surprised that I have to spell it out but — No, I do not usually put on face masks, put my feet up, nor conduct myself in any unprofessional way during any type of meeting in my official capacity,” she added.

Lastly, she said that criticisms on her should not be passed on to the agency she works for. She asserted that her agency works hard and dared the public to ask about this from people who have transacted with FDCP.

Diño then appealed to the public to support FDCP’s projects, such as the Pista ng Pelikulang Pilipino 2018 on Aug. 15 to 21, 2018 which rolls out in all cinemas nationwide, in line with the celebration of One Hundred Years of Philippine Cinema.

The FDCP chair also enjoined the public to contact FDCP should they have concerns, though with a hint of sarcasm: “If any of the hundreds of people who have flexed their precious fingers typing out hate messages to us have actual concerns on film development and need support from my Agency, feel free to reach out to our office through 256-9948 or [email protected]”

For those demanding for my head on a platter, here are fun facts and things to clarify some assumptions circulating…

Diño’s friends were quick to support the actress. Independent film director, Brillante Mendoza, said: “No need to explain! Your work speak[s] for yourself. People will always find negative things to say no matter how hard you work. At the end of the day, truth will always prevail.”

“Magandang Buhay” screenwriter, Ian Reyno, stated that the photo made him buy a set of face masks: “How petty. Because of that photo I bought a set of facial cloths for myself. [Laughs]”

Meanwhile, Carelle Mangaliag-Herrera, wife of former child star RR Herrera, told Diño that what she did was a praiseworthy trait for a leader: “And even if you were goofing around and making your team laugh, that is an admirable trait of a leader!”

Cherie Gil echoed Herrera’s statement, also stating her admiration for the FDCP chair: “I vouch for your dedication, commitment and most of all love of the industry, of what you do and of and for your team! Mabuhay ka (Long live) Liza. You are one woman I admire and continue to inspire.”

Ayala Museum, in partnership with FDCP and multi-awarded Filipino filmmaker Nick Deocampo, is currently holding a free independent film exhibit, “THE HIDDEN CINEMA: The Virtual Experience of the Philippine Cinema Centenary.” The exhibit is slated to run until Aug. 5. JB

Ice Seguerra: Liza Diño has brought life and color to my existence