Why Michael Douglas agreed to be part of the Marvel family 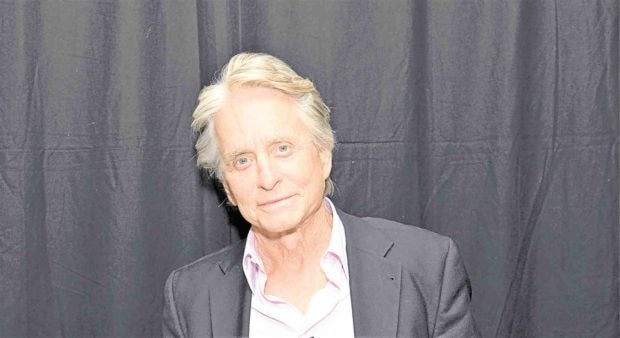 LOS ANGELES—In his continuing journey in Hollywood, Michael Douglas—at 73—has become a Marvel Cinematic Universe actor. The Oscar-, Golden Globe- and Emmy-winning thespian and producer is back as Dr. Hank Pym in “Ant-Man and the Wasp.”

The equally famous son of Kirk Douglas has successfully battled stage IV tongue cancer. He and his wife, actress Catherine Zeta-Jones, have also survived a storm in their marriage, which resulted in their separation. They reconciled in 2013.

In director Peyton Reed’s “Ant-Man and the Wasp,” Michael reprises his scientist role, with Paul Rudd and Evangeline Lilly also back as Scott Lang/Ant-Man and Hope Van Dyne/Wasp, respectively.

When you act in a movie like this with a lot of special effects, how different an experience is it? It’s the variety, it’s the mixture. When they came to me with the “Ant-Man” offer, I’ve never done a green-screen movie. All my films were character-driven pieces. I was anxious to do it. Obviously, with the history of Marvel, why not be in a worldwide hit?

I had the joy of being in a supporting role, so I didn’t have the responsibility of carrying a movie. Also, they orchestrated my time, so I wasn’t hanging around for long periods of time. And they pay you well (laughs). “Where do I sign up,” you know.

So, I became part of the Marvel family and I drank the Marvel Kool-Aid (laughs). I said, this is a nice group. They’re very intelligent, they cast well, their directors are sharp and smart.

This is now the 20th Marvel Cinematic Universe movie. They haven’t missed. I don’t know anybody in the history of our business who’s done that.

Do you look at this movie as a comedy? It’s a superhero movie but it’s funny, as well. I teased them (director and producers) because as Dr. Pym, I am responsible for all the plot, and they cast me because I have a degree in quantum mechanics (laughs). I don’t have any idea what the hell I’m talking about (laughs). Meanwhile, Paul gets to ad lib. He’s very funny.

So I teased him that Paul was not my idea of my protégé. He was a cat burglar who took my suit, and I’m stuck with him.

There was a certain tone of humor in looking at somebody who’s a bit of an idiot, who intellectually is much below me.

Paul is a great writer with a wonderful comedic sense. While they were finding the tone in the first one, in this new one, they’re more comfortable even being more humorous than the first one.

As far as Marvel is concerned, it just makes for more of a good (balanced) menu with some of their darker pictures. 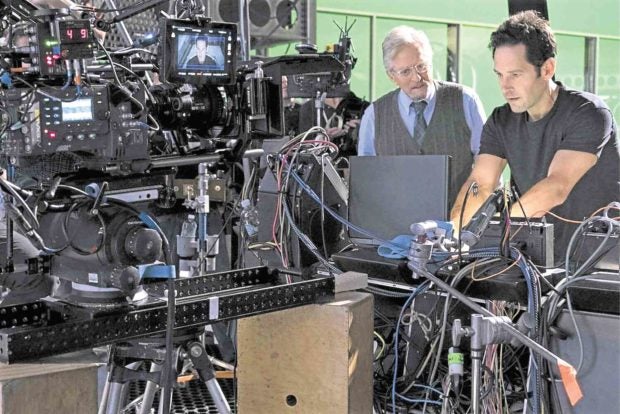 Douglas (left) and Paul Rudd in “Ant-Man and the Wasp”

Evangeline Lilly said that when you open your mouth and talk, it’s like the entire room changes. Are you aware of this “super power” of yours? Well, I think Evangeline is warming me up. That’s very nice. Yeah, I have a few movies. I’ve been doing this for a while (laughs).

As a producer and somebody who’s starring in most of my pictures, I know what the responsibility as No. 1 on the call sheet is—to create the most comfortable environment I possibly can.

Some actors try to intimidate other actors. I embrace the actors, instead. I want them all to be as good as they possibly can because the only thing that matters is a good movie.

I don’t want to be good in a bad movie, right. When the movie is good, everybody benefits. My intention around younger actors like Evangeline and Paul is to make them as comfortable as quickly as possible. Evangeline’s got no problem. Her career has taken off.

I tease her because toward the end of the first movie, when I show her mother’s suit and basically give her the blessing that she’s going to go on and become the Wasp. I look at Evangeline. She has this glowing look, and she’s looking at this suit.

She knew the next movie was probably going to happen, and this (new movie) is what happened. She’s done great and all the power to her.

Let’s go back in time. Do you remember your first paycheck? My first paycheck was like $85 for an off-off Broadway show. My first movie paycheck was paid by Steve McQueen, who was the producer, and it was a movie called “Adam at Six A.M.” I think I got $3,400 but also in the movie, I drove this tangerine orange Porsche. It’s a beautiful car.

When the movie was over, Steve said, “Congratulations” and he held up these car keys. He said, “Here.” I remember like I was a little kid and that was my reward. He gave me that Porsche.

What did you spend the $85 on? Back then, I was sharing a one-room apartment with Danny DeVito on the Upper West Side (New York). So it must have been on food or booze. I don’t know (laughs). It wasn’t on laundry (laughs).

Are you involved in “Ratched,” which is based on Nurse Ratched, the character played by Louise Fletcher in “One Flew Over the Cuckoo’s Nest,” which you produced? Indirectly because we brought it to Netflix. It’s the story of Nurse Ratched leading up to when she was working at the mental institution, what was her life before that turned her into that woman. It’s still in early development stages. There’s a couple of bumps in the road, script-wise, but it’s going on.

What do you like to do when you aren’t working? I also love to travel, but I love golf. I’m trying to talk by my wife into us chartering a catamaran. I am curious about sail catamarans. Catherine is not too … [keen] on the idea (laughs), but I’m working on that. But golf is obviously my major avocation.