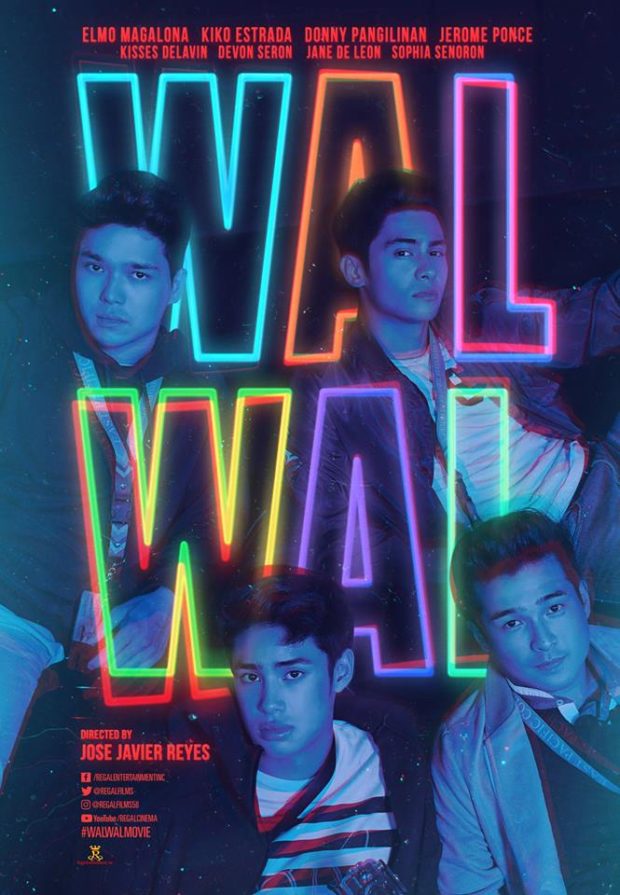 There are movies that effectively capture a generation so well that these movies are what I would I like to call as “timepieces” because they point back to a specific era or decade of the youth. And this is how I would classify the movie ‘WalWal’– a “timepiece” movie.

There is no question that ‘WalWal’ is specifically for the Millenials. It is about them. It pretty much chronicles their daily lives. In some ways, it is an honest and sincere attempt to encapsulate what it means to be a young adult in the year 2018.

As the cinemagoer, you are given an almost narrative-like movie experience into the four lives of the onscreen characters portrayed by the four lead male cast members, namely Elmo Magalona, Kiko Estrada, Donny Pangilinan and Jerome Ponce. Their lives are nowhere near perfect but are beset with problems created and caused mostly by the ill-fated decisions they have made which prove to have long-lasting negative effects on them, as are seen throughout the duration of ‘WalWal’.

Stereotypical, though, the characters in the movie may be, the various predicaments and problems that they individually must address and overcome are, however, huge and confounding to the young adults.

How they manage and face those obstacles should be of particular interest to the moviegoers–whether that be getting caught cheating in a finals exam, getting a girl pregnant, or finding funds to finish schooling, all those are very real and mostly relatable to all who are–and were, once upon a time–young, carefree, and adventurous as the characters are in ‘WalWal’.

Kiko Estrada has swag. The guy has a cool and collected demeanor onscreen. Moreover, in person, he exudes an energy about him which I would like to describe as an “angas factor”. His “angas factor”– rare among his peers–translates likewise onscreen. Yet, it is not offensive because it comes off him so naturally. Kiko Estrada is a “keeper”; he will undoubtedly be an actor for the long haul and for many more years to come.

Elmo Magalona’s acting has improved. His growing self-confidence shows in his scenes. This time he is less self-conscious. Which makes me think he is finally starting to hit his stride as he enters the prime of his acting career. He can and should only further improve from this point on.

Donny Pangilinan is not bad at all in his first acting role in a movie. In fact, he is pleasantly and surprisingly good. That he is a second generation artist must have lent a factor to his being “prepared” for his acting debut in a movie. Admirably, he was clearly prepared. For me, that shows Donny Pangilinan has interest and initiative which qualities should bode well for him in this industry.

Jerome Ponce gave a most praiseworthy acting job in his dramatic scenes. There is a sincerity to his performance and a grounded feel that proves he is already a mature young actor at such a young age. Look out for the scenes wherein he parries with veteran actor Ricardo Cepeda who is his estranged father in ‘WalWal’ and his interactions with his mom as well in the said movie.

All in all, ‘WalWal’ has its hits and misses. There are some scenes that would hit the mark and there are a few that would miss it by a mile. The acting of the main cast range from fairly good to exemplary. Exemplary as in the cases of Kiko Estrada and Jerome Ponce.

The usual types of college students are represented in ‘WalWal’, including the “chick magnet” or “jock type” of a college student, as in Kiko Estrada’s character. I would, however, say his character role was an extremely negative and perverted version of it. To be brutally frank, the said character played by Kiko Estrada came off more like a sexual predator in the movie. In reality, no male college student can get away with the things he did in the movie in this day and age of social media. Also, the character picking up girls left and right from the same school and taking them to a nearby motel, borders on wild fantasy already.