Is romance brewing between Kris Aquino and Atty. Gideon Peña? 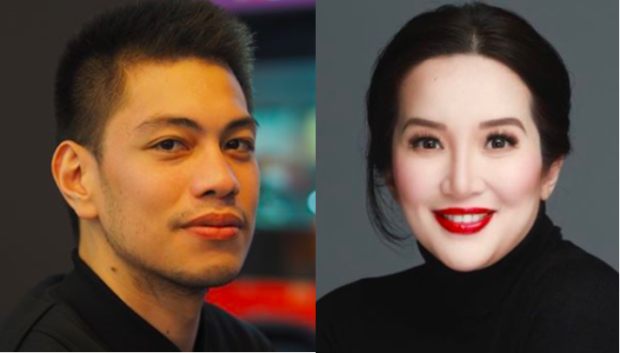 Queen of All Media Kris Aquino was not kidding when she promised last June 21 that it’s now “No more Mayor” for her, referring to Quezon City Mayor Herbert Bautista who she once called her “favorite ex.”

This word of honor was given to Teodoro “Teddyboy” Locsin Jr., Philippine Ambassador to the United Nations, on Twitter when Locsin seemingly scoffed at the thought of Aquino settling for Bautista.

“But Herbert? Really?” Locsin said then.

These days, it looks as if Aquino has dusted her past romance off her, and is now moving forward with her life, with the same optimism and hope for whatever may come her way. For one, her fans did not miss her playful exchange with the dashing lawyer and law professor, Atty. Gideon Peña, both on and off social media.

Peña took to his Instagram last June 28 where he shared a photo of him posing in front of an ivy-covered wall, and a screenshot of his own tweet that said, “Bakit hindi na [lang] tayo?” (Why can’t it be just the two of us?)

It was Aquino’s reply that brought many of her fans to kilig mode, as she commented, “Atty G — if this is for me, wait lang please — I’m shooting for @samsungph now… but if it’s not — she’s a very lucky girl. (Sorry ha, the original Twitter posts were already sent to me by several people & this now popped up on my phone. Change of setup so I got to check IG).”

Peña replied, “@krisaquino it’s just a shout into the void. The things I really mean are sent in private. P.S. Check your Viber.”

Meanwhile, in Aquino’s Instagram post made that same day, she shared a generic quote that said, “Don’t rush into love, because even in fairytales, the happy ending takes place on the last page.”

Peña commented on this post of hers with a quote too, this time by literary critic Barbara Johnson. It said, “True love doesn’t have a happy ending because true love never ends.”

It didn’t take long for Aquino to reply to Peña’s comment, but this time, she chose to quote the lyrics of Randy Crawford’s “One Hello”.

“@the.mightywarrior mahirap maki argue sa lawyer (it’s hard to argue with a lawyer)… but to quote lyrics of ONE HELLO: ‘If you’re not afraid of what love brings, then endings are beginnings of beautiful things…'” Aquino wrote. “I’m still taking my time w/ that #OneHello because I don’t want a repeat of Adele’s version of #Hello…”

Is the language of love now manifested in quoting love songs and kissing emoji? It seems palpable, what with the convenience that social media brings, but to label whatever Peña and Aquino have now as “romance” this early might seem preemptive.

In a free for all question-and-answer moment that Aquino held on her Instagram account yesterday, July 1, she clarified to a netizen (@kaiserinsheeb) the score between her and Peña, when the former asked if they were together.

“@kasierinsheeb NO in a romantic sense BUT we are really FRIENDS,” clarified Aquino.

I’m ready. (THANK YOU for spending part of your 1st of July w/ me. #lovelovelove #gratitude #camaraderie 💝💝💝)

But for those who’ve followed the timeline of Aquino and Peña’s exchange on social media, it was back in June 10 when Aquino and Peña seemingly showed a romantic interest in each other. It was here where Aquino revealed that the handsome young lawyer may have a crush on her .

Peña thanked her for her greeting, with Aquino following her initial tweet with another. Aquino wrote, “So you mean when you said to mutual friends crush mo ko (I’m your crush) — not true?”

So you mean when you said to mutual friends crush mo ko- not true? Kaya we are completely different in Korean your post?

And in two more follow-up tweets, Aquino wrote, “Follow up: I’m inviting you for a post birthday coffee meet up. Pero (But) not in QC, okay?” Aquino said, seemingly throwing shade at Bautista.

Peña replied, asking her when she is free for the said coffee meet up. “When are you free?”

The meet up eventually happened, and Aquino and her production team shared their chai tea date on her YouTube account where she and Peña had a one-on-one sit-down.

The video of their chai tea date posted on June 11 may be viewed below. JB

Kris Aquino tells Bistek: ‘Stay away from me’

Read Next
Suzy, Lee Dong-wook break up
EDITORS' PICK
Metro Manila posts lowest temperature yet this ‘amihan’ season at 19°C
Over 3 Million worth of prizes to be won at Smart Padala’s SENDali Manalo Promo!
Acer starts the year off strong with the Aspire Vero National Geographic Edition
DOH: 28,471 new COVID-19 cases in PH; active cases now 284,458
On Day 2 of implementation, gov’t says workers now exempt from ‘no vax, no ride’ policy
Gear up and get ready to play with Yamaha Mio Gear
MOST READ
Emma Stone calls Andrew Garfield a ‘jerk’ after he ‘lied’ about his ‘Spider-Man: No Way Home’ appearance
LOOK: Edu Manzano, Cherry Pie Picache enjoy Palawan with her son Nio Tria
Unvaccinated has rights but it has limits—DOJ
Retirements prompting major reshuffle in PH military
Follow @CCepedaINQ on Twitter
Don't miss out on the latest news and information.