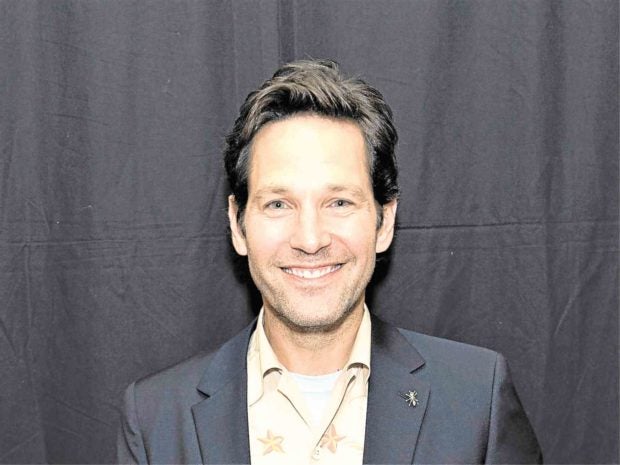 LOS ANGELES—“One of the things I like about playing Scott Lang and it’s something that I feel I can contribute to the story and the script is that he is not a guy who possesses any real super ability,” said Paul Rudd, who not only plays Scott Lang/Ant-Man, but also cowrites the “Ant-Man” movies.

“He is smart, but he’s a regular guy, who just happens to be thrown into this role,” said the actor who reprises his incredibly shrinking hero in “Ant-Man and the Wasp.” “So I feel comfortable. I tend to write comedically, but I just tend to write human beings. I grew up reading some comics of superheroes, but I don’t know how much I would be able to write a ‘Thor’ movie. Although I must
say that the last ‘Thor’ movie was awesome. It was hilarious.”

Paul, one of the most charming actors working in Hollywood today, returns to don the suit that allows him to shrink in size, but multiply in strength. Also back are Evangeline Lilly (Hope van Dyne/Wasp), Michael Peña (Luis) and Michael Douglas (Dr. Hank Pym). 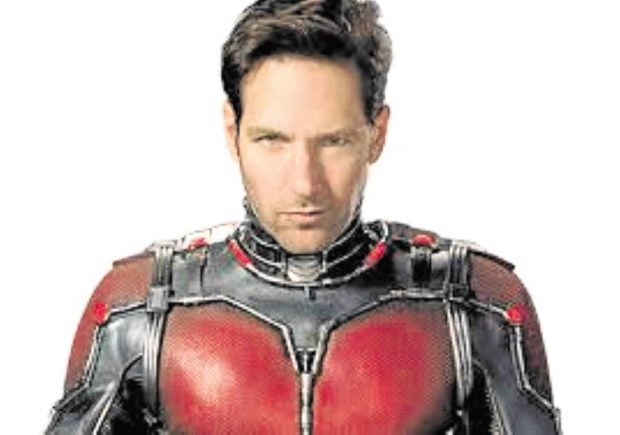 The actor as Ant-Man

One of the fascinating elements of “Ant-Man” is about how he shrinks. How has Ant-Man’s size made you think about your own height? Going through this process, specifically how I physically look, I know I had to go to the gym every day (laughs). That was a crucial element. But it’s weird. I am 5 feet, 10 inches. I am not short, but I am not tall by any means. It wasn’t until I became an actor and I would meet people. They would say, “Wow, you’re short (laughs)!”

People are used to seeing me onscreen. It would never cross my mind that I was a short person. I don’t think that I am. But I’ve also been in a room next to Chris Hemsworth, Chris Evans and Chris Pratt—name your Chris (laughs). I am aware of my physical presence. I’m very aware that, oh, there’s a reason that they cast me as the guy who rides around on the back of an ant (laughs).

Do you think comedy is a way of compensating for that feeling? Comedy can certainly become a default mechanism to cover up for insecurities and get acceptance. That is probably my MO (modus operandi) in life. Comedy is also essential for this film. When done correctly in films, comedy can be used to convey the most dramatic thing and a moving relationship—something touching.

So, depending on how you are utilizing comedy, you can convey anything. But overcompensating insecurities, such as height and that kind of thing, clearly that is the case (laughs).

It’s amusing to watch these toy cars whiz by in the movie. What was that like when you were shooting with these toy cars? And what is your relationship to cars? On set, it was fun to see these cars in real life because we did have little models of them. It reminded me of being a kid because of the Hot Wheels Race Case. I remember having that toy, that case and carrying around cars in that big wheel.

But early on, when we were thinking of the story and what the story might be, one of the first things we thought would be pretty cool was if we could somehow shrink vehicles and you could open up the storyline.

When “Avengers: Infinity War” came out, some people asked, “Where is Ant-Man?” How did you react to these comments by fans? I was so excited to be mentioned—that people noticed, honestly. I was like, thanks, I saw the movie and there was one moment where they actually mention Ant-Man. 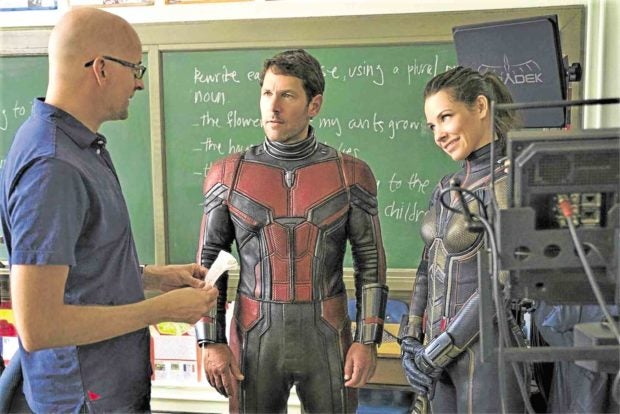 (From left) Director Peyton Reed, Paul Rudd and Evangeline Lilly in “Ant-Man and the Wasp” —Photo by Marvel Studios

But did you ask why Ant-Man was not in “Infinity War”? No, I kind of knew why.

You’ve been married to Julie for 15 years now. Are you also a funny guy to her and your two kids when you are home? I am not trying to be too funny, I guess. She is very funny. And my kids are hilarious—to me and my wife, anyway.

But when we’re at home, it’s very much like, “Take out the garbage.” And it’s cool. I will say this, my wife has always been, and continues to be, incredibly supportive of my career.

She’s happy for the victories, when I get a part or a movie does well. But at home, this job never plays into our dynamic or our day-to-day relationship. It’s very banal in all of the right ways, as I think it should be.

Are you the biggest star when you pick up your son and daughter in school? My son doesn’t want me to go to his school to pick him up. He just turned 13. He’s like, “Dad, I am old enough.” Starting out, he was a little self-conscious of me coming around to the school. He’s forging his own identity and also because it’s a new school this year.

My daughter, who is 8, and her classmates are little kids. They don’t really know, but they do know that I am Ant-Man. When I walk into her class or I pick her up at school, all the kids are like “Hey, Ant-Man!”