Time for David Archuleta to get out of his ‘likable’ shell 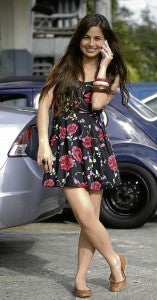 JASMINE Curtis-Smith: Another newbie in the show JIM GUIAO PUNZALAN

The big show-biz news this month is TV5’s bid to add international singer David Archuleta to its roster of contract stars. The “American Idol” second-placer is turning actor by way of “Nandito Ako,” a mini-series in which he plays a young Fil-Am teenager who comes home and gets involved with two lovely babes, played by Jasmine Curtis-Smith and Eula Caballero.

This is Archuleta’s fourth working visit to the Philippines, so it’s decidedly a case of mutual liking between him and his Filipino fans. His performing career in the States has yet to really take off, so he has the time to further build up his now not insubstantial Philippine base. The money involved in the TV5 deal surely is nothing to sniff at, either.

The big question is, does David have it in him to do well as an actor, not just as a singer? The way we size up the young comer, he’s frisky and eager to please, but perhaps too nice and obedient as a talent to come across as exciting and intriguing to behold in performance.

Well, it’s time for him to get out of his “likable” shell and predictable performing “box”—which could be one reason that he’s laying his actor persona on the line for the first time by way of his Pinoy mini-series.

To hedge its bets, “Nandito Ako” should be a musical romantic-drama series that banks extensively on Archuleta’s proven skill and charisma. But, there has to be a point in the show when he can prove his worth as an actor—so, it’s time to go out on an acting limb—and fly!

Adding to the iffy-ness of Archuleta’s baptism of fire as an actor is the fact that his two leading ladies are also relative newbies, so they’ll be contending with their own insecurities. It’s a good thing that veteran actors have been signed up to provide the teen talents the acting support they need to make the mini-series their confident rather than timorous bid for acting stardom.

Also not so pleasant for us is the prospect of having to watch yet another show in which an imported talent has to mouth dialogue in English, since Archuleta is going to play the umpteenth Fil-Am character to inhabit or visit a local TV-film production. Really now, when are we going to finally get over our avid and rabid postcolonial fascination with imports of every shape, size and speech?

DAVID Archuleta: Does he have what it takes? RODEL ROTONI

Truth to tell, Archuleta is only the latest in a long line of foreigners who have starred in local TV-film productions. Back in the ’50s, American Joan Page appeared in some local movies, as did Russian Nikki Ross (who remains a great entertainer to this very day).

Beauty titlists from other countries who’ve top-billed Filipino productions include Johanna Raunio (who costarred with Chiquito in a mermaid movie), Amparo Muñoz, and most successfully, Dayanara Torres, who not only acted with Aga Muhlach but also fell in love with him, and had her own local TV dance show, to boot.

So the template has long been in place —but it really is time to break it and move on to better and less “colonial” show biz initiatives!