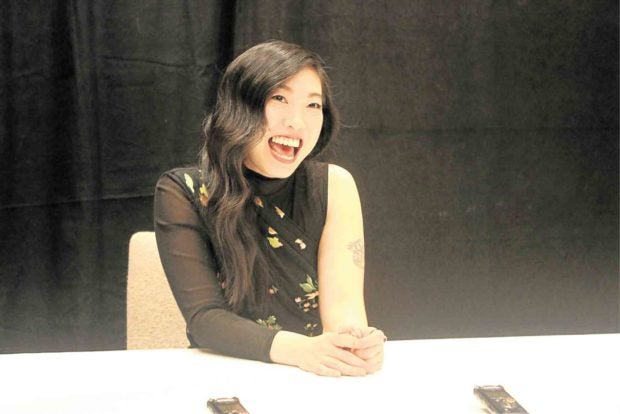 LOS ANGELES—Shoulders hunched, delivering monosyllabic lines, and her face inscrutable as Constance in “Ocean’s 8,” Awkwafina leaves you intrigued about her—who is this woman? That’s a compliment to Awkwafina, whose real name is Nora Lum Ying, originally a rapper with a viral music video of her controversial song, “My Vag,” her response to Mickey Avalon’s “My Dick.”

In this New York interview, Awkwafina was a far cry from her unsmiling, hoodie-wearing, tomboyish “Ocean’s 8” character. She was all glammed up in an Antonio Marras dress, and she was cheerful and joking.

The New York-born rapper-actress is one of two Asians (the other is Mindy Kaling) in the main cast of the wonderfully diverse “Ocean’s 8.” She plays a pickpocket, one of a gang of eight women recruited by Sandra Bullock’s Debbie Ocean to execute a multimillion jewelry heist during New York’s annual fashion “Oscars,” the Met gala.

Awkwafina grew up in Queens, New York, with her Korean dad (her Chinese mother died when she was only 4). One of many alumni of LaGuardia High School of Music & Art and Performing Arts, also known as the “Fame” school, who successfully went on to careers in entertainment, Awkwafina played the trumpet and was trained in classical and jazz music.

In college, she majored in journalism. But the success of “My Vag” and the music video that has been viewed over 2 million times on YouTube led Awkwafina to seriously pursue a career in rap. She recently announced her newest EP, “In Fina We Trust.”

The advocate against stereotyping Asians in media, who turned 29 last June 2, was also cast in the sci-fi thriller “Paradise Hills,” which stars Emma Roberts.

How did you land this role? After “Neighbors 2,” which was my first movie, I was approached by Olivia Milch, who is a very talented director and writer. She cast me in an indie movie called “Dude.” It was one of my first real acting jobs. As they were writing “Ocean’s 8,” Gary Ross (director) happened to see “Dude” before it came out. He FaceTimed me and hired me from there.

“Ocean’s 8” is such an ensemble piece. What was it like? It was like a slumber party. Everyone very warmly embraced me. I’m a newcomer, obviously, and they didn’t make me feel like that, so that was cool.

Can you talk about the cast’s diversity? There’s a difference between deliberate diversity and representation. I think that (deliberate diversity) is something people do when they put people in, so it’s this kind of a Benetton effect (the fashion brand’s controversial ad campaign showing different races).

But for this specific movie, it’s important that we realize this takes place in New York. And the New York I grew up in was all kinds of different people. So we want movies to reflect real life and in doing so, we relate to them.

If someone actually offered you to take part in a heist and make $20 million, how enticing would that be for you? As you said that, it’s pretty enticing (laughs).

There’s a certain rhythm to those movies. There’s a swagger that’s carried over the years.

What did being with all these women bring? Off set, there was a very specific chemistry going on. For me, being obviously a newcomer, I felt extremely safe. That helped my performance in being with these incredible actresses.

Can you talk about your experience making “Crazy Rich Asians”? We’re not all Asian-American. There were also Asian-British, Asian-Australian and others. We were all able to experience Singapore, kind of these people who are lost in their identity.

The cool thing about “Crazy Rich Asians” was that there was no conversation. We were all Asians on set.

How did you get your stage name? I picked it in high school. It was a nickname and, unfortunately, people actually call me that now.

What does it mean? It’s based on an existing water brand (Aquafina), but I made it awkward. So, it’s like “awkward fina.” It’s like a fine awkwardness.

How did your entertainment career begin? I went to La Guardia High School, which is in New York City. I played the trumpet. I started to produce music. I had a song (“My Vag”) that I made when I was 19 years old.
Later, it was found, and I was convinced (by her friend, music video director Court Dunn) to make a music video out of it.

As that video went viral, I started to do more things. My first movie was “Neighbors 3,” three years ago.

Are you still pursuing your music career? Yeah, the best I can.

Did you have a performer’s instinct even as a child? Yeah, I did. When I was little, I could hold a crowd. I attribute that to a couple of reasons… I lost my mother when I was 4 years old. I developed my comedy sense as a defense mechanism.

You studied journalism. Would you have become a journalist if you did not end up in entertainment? I would have loved to become a journalist. That was one of my favorite occupations ever. I didn’t think I could compete, so I just got work at an air conditioning company.

What other jobs did you have? I worked at a Japanese restaurant. I love Japanese food. I worked at a Vegan Bodega right before my video popped off. Yeah, I had a lot of jobs.

Do you lean more toward a music or an acting career? When it comes to acting, I don’t think I have a choice. Every movie is a blessing. With music, I can control that. I can do as much as I want, or as little as I want.

What are your dreams? I think about my life in the next five to 10 years, and I wonder about a sense of security … a sense of longevity. I’d rather have that than a giant house.