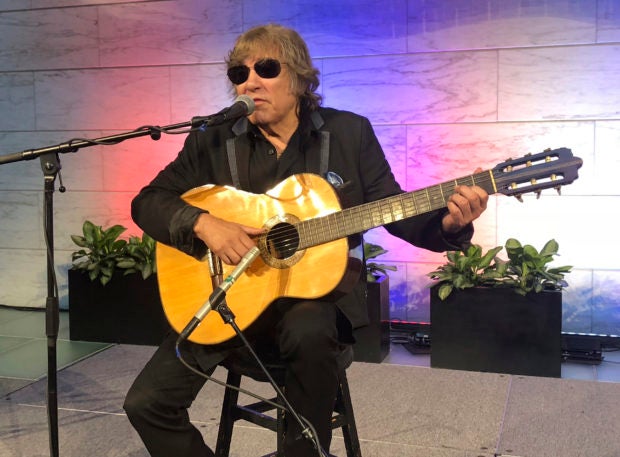 Jose Feliciano on Thursday donated to the National Museum of American History the same guitar on which he performed “The Star-Spangled Banner” during the 1968 World Series in Detroit.

His Latin jazz-infused rendition, the first one personalized by a pop artist, took the national anthem for the first time to the Top 40 charts but also brought him heavy criticism from those who accuse him of destroying a sacred song.

“My records were not played. I mean, it was not good,” the winner of nine Grammy Awards told The Associated Press. “But I call it bittersweet because the really only good thing that ever happened to me from the ‘Star-Spangled Banner’ was that I met my wife.”

Feliciano, known for hits such as “Light My Fire” and “Feliz Navidad”, says his version was inspired by gospel and he did it to get the attention of people “because a lot of times they went to a ball game, paid no attention to the anthem. They sang it but they sang it with no feeling, and they sang it quickly.”

He now feels happy that the Detroit Tigers invited him to sing the anthem in September to celebrate the 50th anniversary of their 1968 World Series.

Besides the 1967 guitar, the 72-year-old Puerto Rican songwriter also donated a pair of his iconic sunglasses, a performing stool, a typewriter he used to write lyrics and a letter he received in the 1970s from a member of the Jose Feliciano fan club in Japan.

“He is incredibly important to understanding the fabric of our American culture,” said Smithsonian music curator John Troutman. “He plays genres that represent the diversity of the American musical experience.”

The National Museum of American History is home to the Star-Spangled Banner, the actual flag Francis Scott Key saw flying over Baltimore’s Fort McHenry in 1814, which inspired the words that would become the national anthem.

Asked about the recent criticism President Donald Trump has aimed at NFL players who take a knee during the anthem to protest racial injustice, Feliciano did not find them at fault.

“Those people who want to kneel, they should have that right,” he said. “It does not mean they are degrading the anthem by kneeling.”

Feliciano said he is currently working on a biographical TV documentary to be released next year, and on a book about the story of his life written by his wife, Susan.

“As far as books go, I am pretty excited,” he said. CC