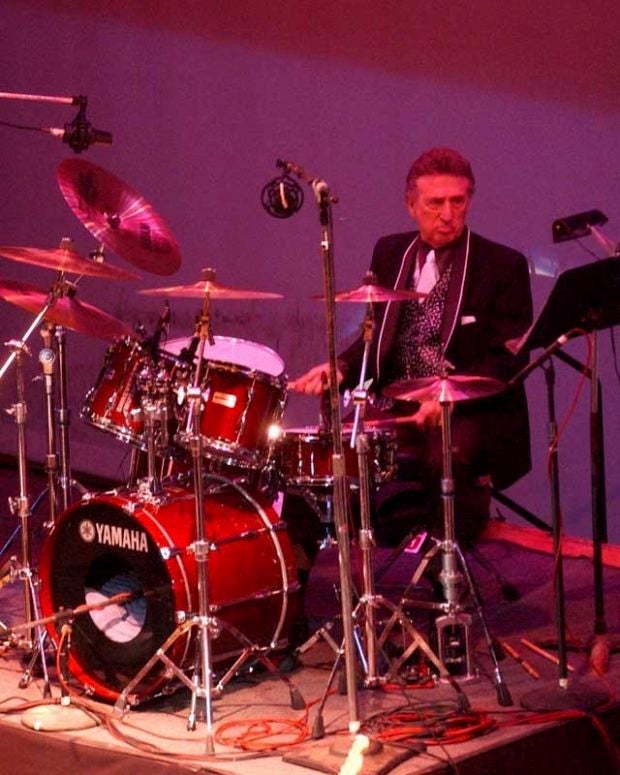 MEMPHIS, Tenn. (AP) — D.J. Fontana, a rock ‘n’ roll pioneer who rose from strip joints in his native Shreveport, Louisiana, to the heights of musical history as Elvis Presley’s first and longtime drummer, has died at 87, his wife said Thursday.

Karen Fontana told The Associated Press that her husband died in his sleep in Nashville on Wednesday night. She said he’d been suffering complications from breaking his hip in 2016.

“He was loved by everybody all over the world. He treated everybody like everybody was his friend,” she said. Presley’s former wife, Priscilla Presley, issued a statement calling Fontana “a tremendously talented musician and a wonderful man.”

Fontana, a member of the Rock Hall of Fame, was the last surviving member of Elvis’ original core of musicians. He met Presley and the others on the Louisiana Hayride, a popular and influential radio and TV country music program based in Shreveport. Staff drummer Fontana asked to join his group for a session broadcast in October 1954. A regional act at the time, the 19-year-old Presley had been recording and touring since the summer with guitarist Scotty Moore and bassist Bill Black, the musicians Sun Records founder Sam Phillips brought in after Elvis turned up at the Memphis, Tennessee-based label’s studio.

“The Blue Moon Boys”, as they called themselves, had been playing a blend of blues, pop and country that was unique at the time, but it was missing something crucial.

“Elvis and Scotty and Bill were making good music, but it wasn’t rock n’ roll until D.J. put the backbeat into it,” the Band’s Levon Helm told The Associated Press in 2004.

Elvis returned often to the Hayride. In 1955 Fontana became a permanent member of the group, working with Presley through much of the 1960s. Influenced by such big-band drummers as Buddy Rich and Gene Krupa, Fontana was admired by Helm, Ringo Starr, Max Weinberg and others for his power, speed and steadiness, which he honed during his time with the Hayride.

“He was my hero, and he made me become a drummer,” Weinberg, Bruce Springsteen’s longtime drummer, told the AP during a telephone interview Thursday. “I was 5 years old when I saw him and Elvis and Scotty and Bill play ‘Hound Dog’ on television and it just swept me away.”

Fontana was there for Presley’s first wave of success, from such hit singles as “Hound Dog” and “Jailhouse Rock” to his increasingly frenzied live shows and hip-shaking appearances on “The Ed Sullivan Show” and other TV programs. He played on many soundtracks — and was occasionally seen on camera — for Presley’s ’50s and ’60s movies. He was on the “comeback” Christmas TV special of 1968 that featured Presley and fellow musicians jamming on a tiny stage before a studio audience, with Fontana keeping time on a guitar case. Widely cited for reviving Presley’s career, that show was his first live performance in years and the last time Moore and Fontana worked with Elvis, who died in 1977.

“Elvis would always want to go back and talk about the early days when there were four of us in a car, me, Scotty, Bill and Himself,” Fontana told the fan site Elvis Australia.

“He told me one day, he said, ‘You know, I wish I wasn’t Elvis.’ And that struck me funny — even back then. You know he kinda wanted to get away for a while. I think he should have retired for about seven or eight years, and then come back — you know. And then he might still be with us.”

Fontana also played on Starr’s solo album “Beaucoups of Blues”, and worked with country artist Webb Pierce and rockabilly star Gene Vincent, among others. More recently, he and Moore were joined by Helm, Keith Richards and other guests for the 1997 Presley tribute album “All the King’s Men”.

In 2000, he played on Paul McCartney’s cover of an early Presley hit, “That’s All Right”.

Born in 1931, Dominic Joseph Fontana began playing drums as a teen in his high school marching band and would jam with his cousin while listening to big-band recordings. By his early 20s he performed at strip joints and spent enough time around the Hayride that he was hired full time, although at first he was asked to play behind a curtain because country audiences scorned drums. Presley’s Sun Records contract was purchased by RCA Victor late in 1955; he became a sensation around the country, and beyond.

During an interview with Elvis Australia, Fontana recalled a 1957 show at a Canadian football stadium, when Presley did his best to honor the owners’ wishes to keep the crowd off the grass and away from the stage.

“So Elvis came on, did a few songs, and said: ‘We’d like for you to get back in your seats.’ Which they did, very orderly. Until the last song, and here they come again,” Fontana said.

“Elvis left the stage, and here we were with 20,000 people! The stage turned over, but we finally got all the equipment in the car, which was right behind the stage. The car was surrounded by kids, and they were shaking the car.” CC

40 years ago, America shocked by death of Elvis Presley