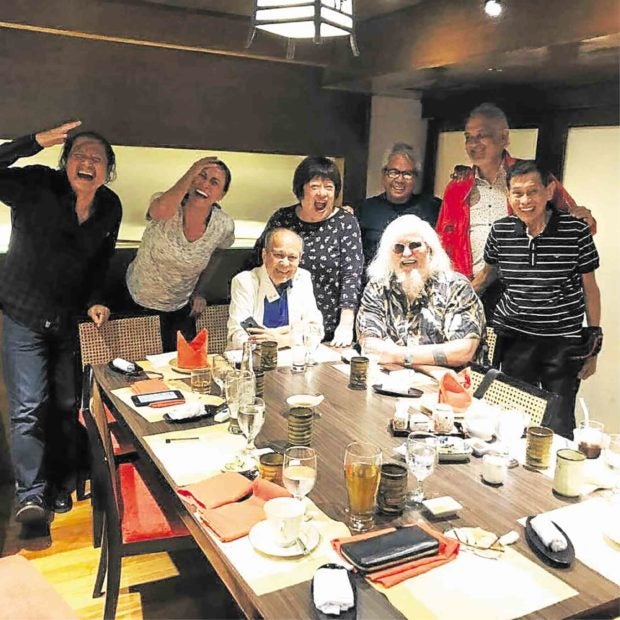 One rainy Saturday, the “Champoy” barkada got together again for an afternoon of mayhem and memories.

The rollicking, riotous reunion started at lunchtime and extended almost to dinnertime.

Cherie Gil told the Inquirer: “We had so much fun.” So much so that they parted ways at 5 p.m., she enthused.

The landmark comedy show ran on RPN 9 from 1980 to 1985, and produced distinguished alumni, in front and behind the camera.

Almost the entire gang was there—except for Tessie Tomas, who was tied up at work, and a little-known member, Joel Torre, who was a production assistant on the gag show. (Trivia time: Joel’s were the hands that came out of the mail box in the letter-sender portion, “Walang Sisihan.”)

Noel, the group’s leader (along with the late Subas Herrero), has a theory on why they hit it off so beautifully: “The ‘Champoy’ barkada is special because the friendship is real. We truly like each other’s company.”

Direk Peque suggested that they possessed a commonality that bound them together: They all had “a high appreciation for silliness and a light touch, which we all shared in varying degrees. We also had a ‘team’ awareness of sharing and giving credit to each other’s strengths.”

The acclaimed director explained: “We all treated each other with respect, and bowed to each one’s quirkiness.”

Mitch agreed: “What makes us click is that we’re so different from each other. It was a very volatile concoction. Noel had his hands full in those days.”

Ronnie, who was a relative newcomer then, recalled: “The show was my initiation. In fact, I felt like a zombie while I was on it. But the ‘no-bulls*it’ camaraderie served as a comforter for a probinsiyano like me.”

Ronnie has only fond memories of those heady days: “Professionalism, music and laughter were the show’s main ingredients.”

According to Mitch, Ronnie bears the rare distinction of doing a bed scene with all three female “Champoy” stars—dubbed the “Champettes.” “Ronnie’s claim to fame was that he made ‘cinematic love’ to all three of us!”

Cherie is the acknowledged “baby” of the gang. “I’m the youngest … the only cast member who doesn’t have a senior citizens’ card!” That’s why she adores hanging out with them, she quipped. “I get discounts on everything!”

She turned sentimental: “Seriously, our friendship has lasted almost four decades already. Now, that’s a real family. That’s friendship. They’re the best thing that happened to me in my teenage life.”

Mitch recounted: “We didn’t realize how special it was then. Noel included the cast in the creative meetings. Back then, we just thought it was a good opportunity to eat and drink at the same time.”

She waxed nostalgic: “Friendships were formed based on trust and respect for each other’s work and spilled out to our personal lives. Every show had its backstage punchlines, sometimes even funnier than those onscreen. But that’s for the memoirs!”

Needless to say, they all sorely miss Subas, who passed away in 2013.

“Subas had a zest for living life to the fullest that was very contagious,” Mitch looked back.

“I miss his big teddy bear hugs and the warmth of his heart and smile. He always called me Chi Chi,” Cherie reminisced.

“There is no ‘Champoy’ without Subas,” Noel noted. “We did a toast in his memory during our get-together. As far as he and I were concerned, we clicked because we were friends since grade school. Our humor and personality were in sync.”

That was true of the entire barkada, Noel asserted. “I doubt if ‘Champoy’ would survive now in the era of Vice Ganda.”