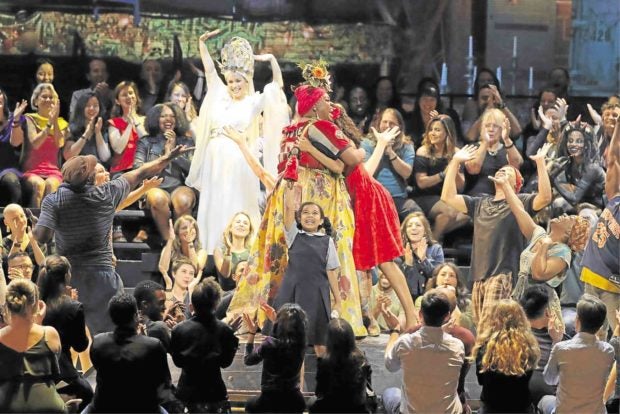 Cast of “Once On This Island” performs at The Tony Awards

NEW YORK—It’s time once again for The Tony Awards! For the theater folks, it’s like Christmas, your birthday and the Super Bowl rolled into one! It’s a night met with so much excitement and anticipation by the casts of the numerous nominated shows, and theater fans, regular or occasional.

Of course, for a mammoth theatrical night like this one, there is a ton of preparation and numerous rehearsals, coupled with our regular eight-shows-a-week schedule. It’s most definitely a test for our endurance and energy to get all of what we need to do, done.

May 17 – First rehearsal, Circle in the Square

“Once On This Island” began its preparations on May 17 with a rehearsal at our theater with our Tony-nominated director Michael Arden, musical director Alvin Hough Jr., choreographer Camille A. Brown and her associate Rickey Tripp with the full cast and stage management. We all get scripts and music for what our presentation will be. Of course our staging for the truncated Tony number will be somewhat different from what we do nightly, but does fittingly represent as many of the elements that make our show the experience it is. We spent a couple of hours figuring all that out before we presented it before the powers-that-be in charge of the Tony Awards.

We weren’t required to be in costume for this one, as this would involve only spacing and blocking for our number. We were given a good chunk of time to properly do this for both the cameras and the audience at Radio City. We were all told where the cameras were situated, and how to best play to them. After our rehearsal, I stayed to watch “The Band’s Visit” rehearse. This musical is one of my favorites this season, and even this Tony presentation gave me goose bumps that cascaded from the top of my head to the tips of my toes.

We all knew that this would be our longest day as it would not only include a final dress rehearsal, but a regular show as well. We were called at 10:15 a.m. at our theater to prepare and get into costume for our Tony presentation. This would be our last chance for any sort of troubleshooting and questions.

The cool thing about the dress rehearsal is that we get to say hello to our friends from other shows that opened this season. In the house, we got to see the casts of “Summer: The Donna Summer Musical” and “The Band’s Visit” as they waited their turn, and the cast of “Frozen” as they were coming from theirs. So many hugs were exchanged as well as congratulatory greetings. This has been a season of incredible creative work, which is a great reason to pat oneself and your friends on the back.

Following the 3 p.m. matinee performance, I headed home for a hot shower and a couple of hours of rest whilst preparing my outfit for the evening styled by PJ Pascual (blazer by Theory, blood red bustier by Cristina Ottaviano and my own trousers by Tom Ford). Once at the theater, I settled myself into my dressing room that I share with Tamyra Gray who plays Papa Ge. Her daughter Sienna and cousin Amber were with her. At around 8:15 p.m., I got started on my makeup, and by around 9 p.m. I got into costume, which included my lighted headdress (for the Tonys, more LED lights were added) and my gown fashioned from mosquito nets with a stethoscope belt. Into the Golden Touch bus we all piled in, running on adrenaline and different sources of caffeine.

Once it was time for us to enter the building, we got into microphones and waited for stage management to tell us it was OK to get into position, some of us backstage and others on stage, in a sandbox constructed just for this single performance, complete with a pool and a sheet of rain. I was able to catch a few folks just to say hello: Marissa Jaret-Winokur, Brandon Victor Dixon, Rachel Bloom and Christopher Jackson. It was then time to head to our starting positions and do the number.

The wait backstage felt like an eternity. We couldn’t really hear what was going on onstage while awards were being given out (I had to watch the telecast on my DVR to see what was actually happening), so I spent the time praying and trying to relax. This was a special night, as this would be my first time performing as a member of a company representing our Tony-nominated show. I didn’t get to perform on the Tony stage when “Miss Saigon” was nominated in 1991.

Once our number was over, it was time to get back on the bus to return to our theater. And the second we got on the bus, a bunch of us tuned into the telecast via our cell phones in order to keep up with the rest of the show and find out who the winners would be. Around 10:30 p.m., Christine Baranski came on stage to announce the winner for Best Revival of a Musical. And when she opened the envelope, we held our breaths waiting for what she would say next.

Our entire bus full of actors, stage management, wardrobe and makeup teams erupted into screams of triumph, bursting into happy tears feeling beyond elated that our little show won. When we arrived at the theater, the celebrating continued with hugs being exchanged. Everyone then got into their party clothes, and headed to Vida Verde on West 55th Street to really get down and boogie.

Everyone that was there was dancing, stopping only to congratulate a cast member, designer or anyone involved with the production, to which we could only say “thank you.” Yes, we all feel grateful to all our investors and producers for diving into this headfirst. We thank our creative team for giving us this playground on which to create night after night. We thank one another for having each other’s backs. And we thank our audiences for coming, especially the ones who came knowing nothing about the show and leaving with smiles on their faces.

What a most magical and incredible evening this has been. It’s now almost 5:30 a.m. and I am at home, watching cartoons while writing this article, and smiling from ear to ear.

As for right this second I have 16 shows left. Oh, these next performances for this whole cast are going to be lit!

Our show won a Tony! Someone may have to pinch me!

TAGS: Backstory, Entertainment, news, Once on This Island, The Tony Awards