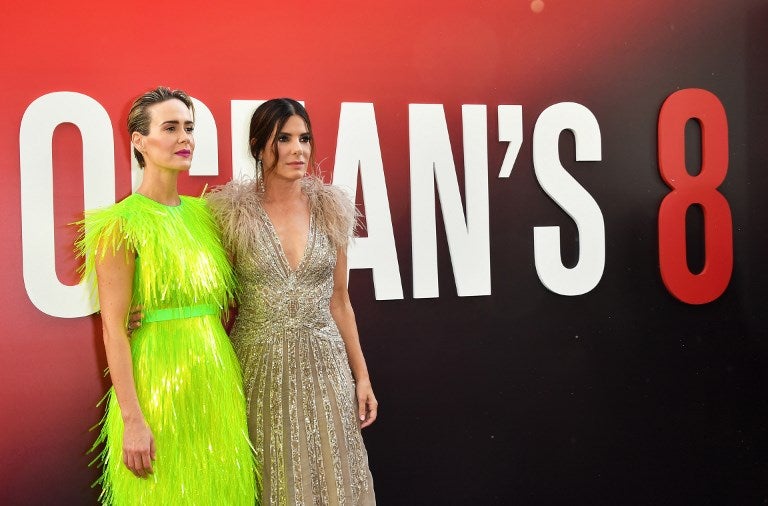 Sarah Paulson (left) and Sandra Bullock arrive for the World Premiere of Ocean’s 8 on June 5, 2018, in New York.  AFP

LOS ANGELES, United States – The women of “Ocean’s 8” proved this weekend that they know how to steal the show — and much more — as the new heist flick took in an estimated $41.5 million in North American theaters.

The result: one of the top 10 openings of the year so far, which also best three earlier “Ocean’s” editions.

The film stars Bullock as Debbie Ocean, sister of Danny Ocean (originally played by George Clooney), as she assembles a gang of talented women to plan a seemingly impossible diamond heist from a glamorous gala in New York.

In second place in the three-day weekend was last weekend’s leader, “Solo: A Star Wars Story,” starring Alden Ehrenreich as a young version of the swashbuckling space pilot. The Disney film took in $15.2 million, roughly half its previous weekend’s total.

In fourth was a new film, “Hereditary,” at $13 million the best opening ever for the A24 production company. The horror film, about a family haunted after its matriarch dies, stars Toni Collette and Gabriel Byrne. Its decent opening came in spite of an R-rating and less-than-glowing reviews, including a D+ from CinemaScore.

In fifth was Disney/Marvel blockbuster “Avengers: Infinity War,” at $6.8 million. With a cast including Robert Downey Jr., Benedict Cumberbatch and Scarlett Johansson, the superstar-rich extravaganza has now taken in $1.998 billion worldwide.

Also of note: Focus Features’ tender documentary “Won’t You Be My Neighbor,” about the life of “Mister Rogers” host Fred Rogers, took in $470,000 as it opened on just 29 screens (a better per-screen average than any other top-25 film). It has a remarkable 99 percent “fresh” rating on Rotten Tomatoes.  /cbb