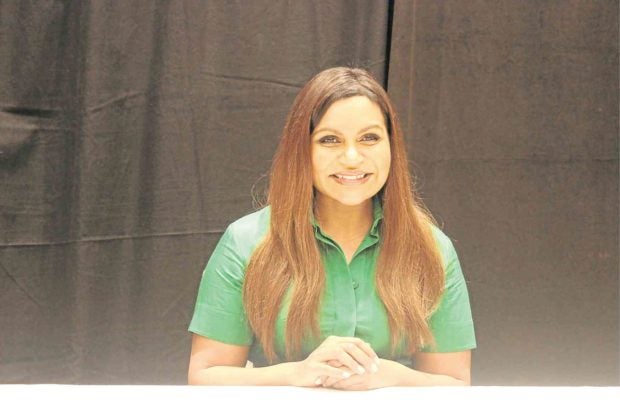 LOS ANGELES—Leave it to a talented comedian and actress like Mindy Kaling to tell an amusing story when she was asked if anything exciting happened to her at the Met Gala in New York last May 7.

“This year, I sat next to Chadwick Boseman who is one of the handsomest men in the world,” began Mindy, her eyes twinkling.

Picture them together, like a royal couple, in the annual fashion extravaganza—Mindy in a silver gown by Vassilis Zoulias and a massive crown sitting on her head while Chadwick rocked it in a white and gold Versace suit with a matching cape.

“Chadwick looked incredibly handsome,” said the “Ocean’s 8” star with a grin. “So I was sitting next to Black Panther himself. I don’t know if he’s married or whatever but I just decided to make it look like we were there together with my body language (laughs). I just put my body next to him (demonstrates how she leaned closer beside him) so if anyone saw us, they would think (we were together).”

Mindy, in a green dress by Solace London and black Christian Louboutin pumps in this New York interview, added, “I was wearing a huge crown and he looked like a king so I thought, OK if anyone sees us, I want them to think at passing glance, ‘Oh, are they together? Maybe because they have such a good rapport, with their body language.’ Chadwick was very friendly. That was a pretty glamorous moment.”

The actress, who plays Amita, a jeweler recruited by Sandra Bullock’s Debbie Ocean for a heist by an all-female gang in “Ocean’s 8,” talked about the rise of South Asian actors in Hollywood.

“I grew up knowing the power of Bollywood in my entire life,” said the actress-writer whose family immigrated to the United States in 1979, the year she was born in Massachusetts. “I knew about Shah Rukh Khan. There were so many Bollywood stars that loomed so large in my life. I knew that outside of the US, there was a great audience and a great desire to see Indians.

“Riz Ahmed is obviously Pakistani-British but the resurgence of South Asian actors has been so amazing. Since I got my own show, there’s been Riz, Hasan Minhaj, and Aziz Ansari. And they’re not side characters with goofy accents. They’re the handsome leading men.

Not the only way

“And this to say nothing of Priyanka Chopra who’s had a show since mine. She’s gorgeous but it’s wonderful that the only way to succeed as an Indian person with dark skin is not just to be a Miss America or to just be known for your beauty. We can now excel in comedy and other areas.

“I had dinner with Riz the other night and we were talking about how it was really exciting for us to see the resurgence of movies like ‘Black Panther’ and which do so well because we feel that we’re all in a fraternity with our African-American brothers and sisters.”

On the inclusion rider, which Frances McDormand popularized when she mentioned it in her Oscars best actress speech—it’s a provision added to a contract of an actor to guarantee that the cast and crew is diverse—Mindy said, “I have a couple of different TV shows and what you realize as an employer is—in order to have more people of color who work on your crew, cast and writing staff—is that a lot of times it’s hiring people who have not been hired before. You have to mentor them, which takes time.”

The producer of “The Mindy Project” and “The Office” continued, “So what that means is that for the next couple of years—hopefully it won’t take that long—you need to spend the time nurturing them so that they don’t fail and then there’ll be a much wider pool of people to hire.

“I look at people like Ava DuVernay. I did a movie (‘A Wrinkle in Time’) with her. She had an incredibly diverse crew. The reason they were so good is that she has hired them for many movies. When she first hired them, they didn’t have any experience.”

Asked what was the bigger challenge in Hollywood—being a woman or a minority member—Mindy laughed as she answered, “My double minority facets. Pitting them against each other like that!”

On the continued call for adequate representation of minorities in Hollywood, the Dartmouth College alumna said, “It’s so much about intersectionality, right? Because so much of the Time’s Up movement was like, let’s make sure we’re not speaking only for white women. What was really smart about a lot of the women who are doing Time’s Up, is being OK, let’s get someone like Oprah Winfrey behind it so this is not yet another cause that is championed for frankly, rich, white women. Let’s make sure that women across the board feel that way.

“That seems like a very specific cause. So making this not just about Hollywood, not just about a one-industry issue but make this also about teachers, people in other countries where sexual harassment is rampant….”

“Ocean’s 8” has been praised for its diverse cast. “We shot this movie in 2016, before the time when people were doing fear-based casting which I think is happening a lot now,” said Mindy. “So I give that credit to Gary Ross (director) for wanting to do that before there was this fear in everybody.

“If we do another one, which I hope we do, there’s an opportunity to make it even more diverse. People have mentioned that Chita Rivera would be such an amazing person to have.”

After Kevin Feige, president of Marvel Studios, hinted at bringing Kamala Khan, alias Ms. Marvel, to cinematic life, Mindy and Riz tweeted about their interest to write the script, with Kumail Nanjiani.

“Kamala Khan-Ms. Marvel is this amazing new character in the past five years that Marvel, to their credit, created,” explained the 38-year-old, who gave birth to her first child, Katherine, in December last year. “It’s written by G. Willow Wilson who is a Muslim woman. Ms. Marvel is a Pakistani-American superhero who is a teenage girl. She’s obsessed with Marvel comics and superheroes but comes from a traditional background.

“She’s such a funny character and I think it would be an amazing movie franchise. I would love to be a part of it.”