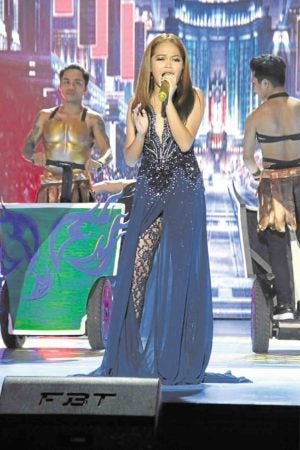 “It’s been two months since I’ve eaten ice cream or anything sweet,” said Janine, who can very well afford whatever she wished to eat after bagging a cash prize of P2 million. She also won a house and lot, a management contract from ABS-CBN, a vacation package, a set of musical gadgets, a livelihood package, premium television sets and a trophy created by Filipino visual artist Toym Imao.

As for her cash prize, Janine said she planned to use it to help her grandmother, who recently had a stroke.

She added that she would use part of the money to finance her grandmother’s kidney dialysis.

“I will also set aside a portion of it for my siblings’ education,” the teener told the Inquirer shortly after the finale held on Saturday at the Aliw Theater in Pasay City.

Janine, who is scheduled to return soon to her hometown Lapu-Lapu in Cebu, said the first thing she’d do would be to visit their parish church as a form of thanksgiving. “I will donate some of my winnings to charity,” she added.

The Cebuano singer garnered an average score of 96.11 percent from combined jury scores and votes via SMS and online. Placing second was Bukidnon’s Ato Arman, who got a score of 74.27 percent. Steven Paysu of California, USA, placed third with 61.80 percent.

“When it was just Kuya Ato and me onstage, I didn’t know how to react. I was already happy to have gone so far in the contest. I actually expected his name to be called the winner,” said Janine, adding that she had learned a lot from the competition and was willing to share them with youngsters who would be brave enough to pursue their dreams.

“The coaches told me, ‘Gawing malinis ang pagkanta.’ That’s what I tried to do, and I guess it worked,” said the youngest contestant of the competition, and also an early favorite of TV viewers and netizens. During the final round, Janine earned a standing ovation from the judges and the studio audience after singing a medley of songs by Bamboo, titled “Noypi,” “Tatsulok” and “Hallelujah.”

“Tawag ng Tanghalan” is a segment of the noontime variety program, “It’s Showtime.”