When President Rodrigo Duterte kissed an overseas Filipino worker (OFW) Bea Kim during a state visit in South Korea, June 3, the crowd cheered loudly, but the sentiments online were mixed.

The kiss between Duterte and the married woman sparked many a debate and many a justification for his behavior from his supporters.

Presidential Spokesperson Harry Roque claimed there was no malice in the act, and that in fact, the woman was “honored” to be kissed by the President.

“I believe that an overwhelming majority of Filipinos continue to support the President and found the kiss a light moment that is very accepted in the culture of Filipinos,” Roque said.

Presidential Communications Operations Office (PCOO) Assistant Secretary Mocha Uson has locked horns with Kris Aquino when she drew comparisons between Duterte’s kiss and that of two women kissing her father, the late Senator Benigno “Ninoy” Aquino, moments before the senator was slain.

Pro-Duterte blogger Sass Sasot claimed that it was the opposition who turned the woman into a victim, when the OFW herself had said there was no malice.

“Not a single ounce of condemnation against the man she kissed on the lips. And the critics still think she’s still a ‘victim,” Sasot stated.

De La Salle University professor Antonio Contreras said, “While the President may have acted improperly in Korea on a matter of protocol breach (which he doesnt have cared for anyway (sic)) I will not go as far as calling it sexual assault.”

The professor also claimed that Duterte was not normalizing misogyny but rather, grew up in such a culture. He suggested that critics should “change people around you.”

Another pro-Duterte blogger, Thinking Pinoy or RJ Nieto, wondered, “Kung si Justin Trudeau ba at Hindi Duterte ang gumawa, OK na (If Justin Trudeau did it and not Duterte, would it be OK)?” 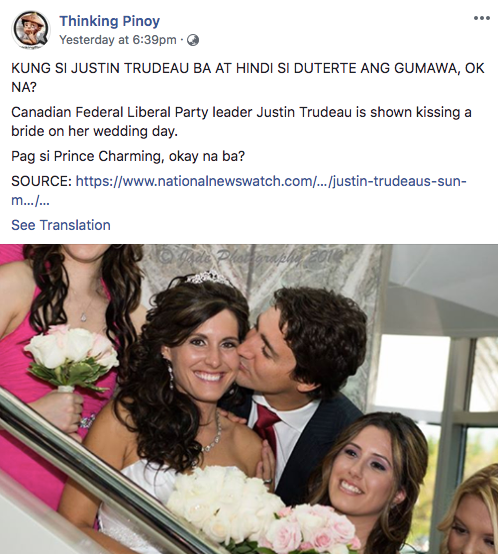 The picture Nieto shared is that of Trudeau kissing a bride on the cheek. Nieto failed to provide the context of the photo, which was that it was a private setting — a wedding — and that her family had called on the Canadian Prime Minister for a picture. It was they who had asked if he could kiss her on the cheek; he asked her, “Do you mind?” and the bride consented, according to a Huffington Post report.

While his political allies saw no wrong, Duterte’s act was met with criticism from netizens and celebrities.

“Clearly inappropriate,” tweeted TV host and volleyball player Gretchen Ho on a video of the kiss.

When a netizen, one Sel with Twitter handle @zleblan, replied to Ho by pointing out that the woman and the crowd reacted positively, Ho said that the President has to follow a certain behavior in line with his position.

“He is in a position of authority. The highest at that… That’s not being professional. He is not out to make entertainment,” she replied.

“I am a Filipino and I do not accept this behavior, especially from a person in authority. Deplorable. Mahiya naman kayo (Have some shame),” said actress Agot Isidro.

Some celebrities were also alarmed that their profession was being compared to the behavior of a public official.

Actor Dingdong Dantes aired his side: “As actors, we are accountable to our viewers, our producers and the manner of delivering the story. Aba’y ibang usapan yan kapag public official ka. Kaya’t huwag dapat ihambing gamit ang ganiyang argumento.”

(It’s a different story when one is a public official. That’s why you shouldn’t use that type of argument.)

He explained that actors are only portraying a character, and that they could even refuse to do certain acts. 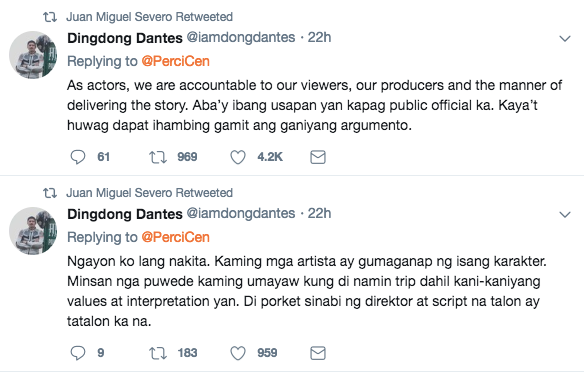 (Sometimes a scene requires a kiss. It’s in the script. It’s part of our job. Is it part of the President’s script?)

But as discussion on the issue continues, it is worth noting that in the Philippine constitution, under Republic Act No. 6713 or the Code of Conduct and Ethical Standards for Public Officials and Employees, it is stated that public officials “shall at all times respect the rights of others, and shall refrain from doing acts contrary to law, good morals, good customs, public policy, public order, public safety and public interest.” JB

Duterte on ‘showbiz’ kiss: ‘We enjoyed it’

Duterte apologizes to Kris Aquino: ‘We are sorry for the incident’

‘It’s a once in a lifetime experience,’ says Filipina kissed by Duterte in Seoul