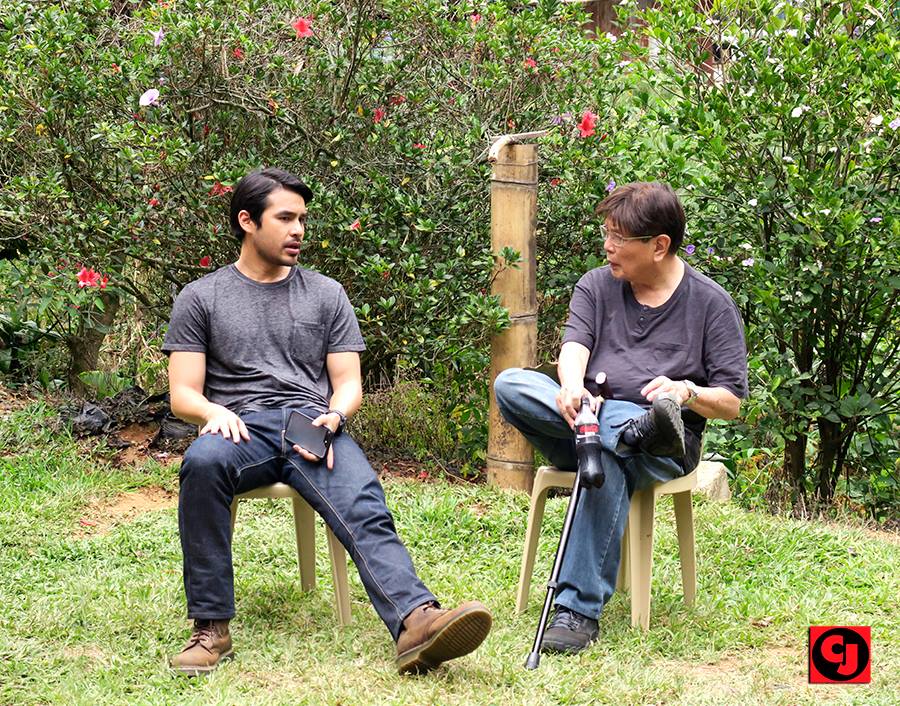 Atom Araullo has finally addressed director Mike de Leon’s tirade against him regarding their collaboration on the indie film “Citizen Jake.”

It was Araullo’s acting debut, with De Leon admitting to handpicking him in his social media posts on the movie’s Facebook page, where he signs off posts with his name.

However, after the project, the director said he was “disappointed” with Araullo and his “kind of journalism.”

“I only realized later that Atom’s journalism was not exactly the kind of journalism I had in mind. It’s not the gritty kind but more of the celebrity-centered schlock that sometimes verges on entertainment, even showbiz,” De Leon elaborated. “Looking back, I can see why he wanted to become a movie actor. Perhaps the journalist was really a closet movie star.”

After over a week, Araullo released a statement today on his own Facebook account. “I intend for this to be the first and last time I write on the matter,” he said.

He explained that he remained silent after De Leon’s sharp words because “I didn’t want to distract from the film, or be accused of cheap gimmickry to promote it.”

However, he felt that the movie’s supporters deserved to see him “set the record straight.”

Araullo recounted being tapped for the project in September 2016: “Early on, without a script or a clear story, director Mike de Leon wanted me to play the lead in the film. It was a surprise.” He agreed to collaborate with De Leon because he “believed in the director.”

“Mike made deliberately hurtful remarks about my journalism, which, ironically, has nothing to do with my participation in the film,” Araullo said.

“I have never made any claims about the quality of my output or my stature in the media industry,” he said. “I’ll leave it to the public to appraise the value of my work.”

He also expressed some of his views on the director, commenting that De Leon’s behavior was allegedly nothing new and that it made working on the film difficult.

“Despite everything, I do not wish to besmirch Mike’s reputation the way he did mine. However, I think it is important to explain that while many were shocked by his recent tirade, I was not.”

“It was only the latest in a string of unprovoked, irrational, almost random tantrums that I had to endure during the making of this film, determined as I was to see it through,” he said, adding that “voluminous texts and emails” held proof of more tongue-lashing.

He also implied that he wasn’t the only one on the receiving end of De Leon’s caustic words: “When others found themselves in Mike’s crosshairs, I tried to be there to lend a sympathetic ear. ”

“Perhaps his woeful behavior continues because he is never held accountable,” he observed.

“Mike is a deeply troubled person. The kindest thing I can say about him is that he needs help, patience, and understanding as he wrestles with his personal demons,” he said. “But while he has certainly tested the limits of my endurance, I can rest easy knowing that I worked hard, behaved professionally, and did all to the best of my abilities at the time the film was made.”

Araullo also had some reverential words for De Leon: “Mike’s contribution to Philippine cinema is unquestionable. I hope he remains productive after Citizen Jake, making more movies that will rouse our consciousness, make us uncomfortable, and spur debate.”

He stated that he still supported the film, and noted that he and his character were not the same person: “I fear I’m stating the obvious, Jake Herrera is not Atom Araullo. Although there are similarities, we don’t necessarily share the same politics.”

“As for my own political views on current events, I have expressed and will continue to express them in my own way and on my own terms. I have not had a problem with being outspoken in the past, and my views have not changed since the making of Citizen Jake,” he said.

De Leon, meanwhile, posted a reply today on the “Citizen Jake” page, where he revealed more of Araullo’s shortcomings.

“Many of the things you said are true — that I am a deeply troubled person, I accept that. I come from a crazy rich family anyway,” he admitted.

He noted that Araullo had left out “a few important events” and gave an account of one of their clashes on set: “When we were shooting the last sequence with Teroy [Guzman], you unexpectedly ignored my direction and did something that was not rehearsed nor agreed upon. Many people were witness to this.”

“I told you that never in my career as a director has any actor disrespected me as much as you did,” he said, and that he had called out Araullo for his “yabang (ego).”

He also claimed that he lacked empathy: “How can you be a journalist if you lack this basic ability to understand people’s problems (not mine). Isn’t journalism about the story, not the journalist?”

“And you say you cringe at being called a celebrity, a star. How hypocritical. Don’t bother to cringe anymore because you revel in it,” wrote De Leon.

De Leon lambasted him for doing a commercial for a fast-food chain and exploiting “the Marawi bakwit (refugees).” “I may have my demons to deal with but you have yours too, my pompous friend.”

He continued to demean Araullo’s career, stating that “wala ka pa namang (you don’t have any) real accomplishments except being the famous boy in the rain who braved the wrath of Yolanda, an unrelatable documentary on climate change shot in Scandinavia, and of course, Umagang Kay Ganda.”

“You know how your performance in Citizen Jake was enhanced and ‘fixed’ in the editing… You won’t want me to upload your most horribly acted scenes, and the one that had my team rolling in laughter everytime they saw it,” De Leon taunted.

De Leon mentioned that prior to writing a post about Araullo, he had approached him for a statement to be posted on the “Citizen Jake” page.

“Perhaps it would entice your millions of social media followers to watch their idol on the big screen,” said De Leon. “But wonder of wonders, they never came to watch the film and still they scream ‘I love you, Atom. I want to marry you, Atom.'”

However, Araullo declined, stating that he wasn’t “used to making statements unless you’re interviewed.”

“That was the last straw. You said you had to endure a lot throughout the making of the film… I had to endure your superciliousness, your overweening ego, your disparaging remarks about movie people and actors, even your lack of manners,” De Leon said of Araullo’s attitude.

“I had to remind you to at least say thank you to the staff and crew before you left Baguio,” said De Leon. “Is that what you learned from your parents? Or did they fill your head with hot air as you were growing up, telling you were the best in everything you did.”

De Leon added that he had “no excuses” for his own issues, but as for Araullo, “stop pretending to want to embrace the universe, when all the time, you only want to embrace yourself. This is called narcissism.”

“Citizen Jake” is a film about “citizen journalist” Jake Herrera who is out to expose corruption in the government while also having to face truths of his own family’s involvement in politics. The film is showing in select theaters.  /ra

De Leon’s ‘Citizen Jake’ as metaphor of an unchanging country