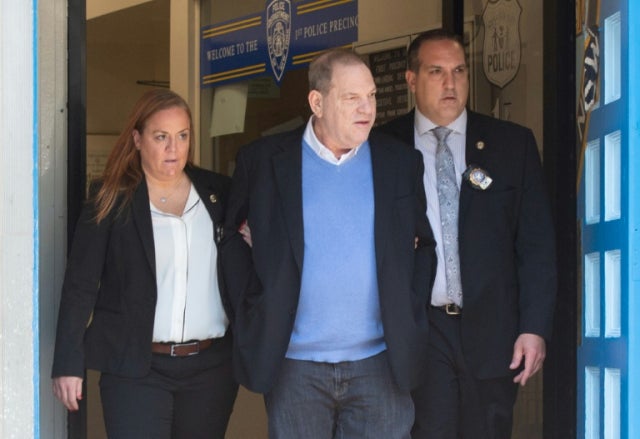 Disgraced Hollywood mogul Harvey Weinstein was charged with rape and a sex crime in New York on Friday, in what was hailed a landmark for the #MeToo movement, nearly eight months after his career imploded in a blaze of accusations of misconduct.

The former mogul — once the toast of Hollywood, whose films won scores of Oscars — smirked as he was escorted into a Manhattan courtroom in handcuffs to face the first criminal charges lodged against him.

Weinstein, a 66-year-old twice-married father of five, was charged with rape in the first and third degrees, stemming from an attack on a woman in 2013, and a criminal sex act against another woman in 2004. Neither victim was named.

Standing alongside his defense attorney, the former Tinseltown powerbroker looked glum during the brief arraignment, agreeing to post bail at $1 million cash, surrender his passport and be fitted with a GPS monitoring device.

Weinstein’s career went down in flames in October over sexual assault allegations following explosive articles in The New York Times and New Yorker, which sparked a sexual harassment reckoning across the United States, in multiple industries.

Nearly 100 women have now accused Weinstein of crimes ranging from sexual harassment to assault and rape going back decades.

New York authorities have been investigating the disgraced producer for months, under growing pressure from Hollywood actresses to bring him to justice, and their probes are ongoing.

Weinstein already faces a slew of civil lawsuits, is reportedly under federal investigation, and his former studio has filed for bankruptcy.

But these were the first criminal charges against Weinstein.

Defense attorney Ben Brafman told reporters that his client would plead not guilty and still denied any non-consensual sexual activity.

“We intend to move very quickly to dismiss these charges,” Brafman said.

“Bad behavior is not on trial,” he added. “Mr Weinstein did not invent the casting couch in Hollywood.”

His case was adjourned until July 30.

The former studio boss surrendered to police shortly before 7:30 am (1130 GMT) wearing a white shirt, pale blue sweater and dark blazer, as dozens of television cameras and photographers mobbed the street outside.

He walked into the station clutching several books, apparently including the Rodgers and Hammerstein biography “Something Wonderful” and a volume on late director Elia Kazan.

He left handcuffed, without the books, after his mugshots and fingerprints were taken.

Out on bail, Weinstein’s travel will be restricted to New York and the neighboring state of Connecticut. 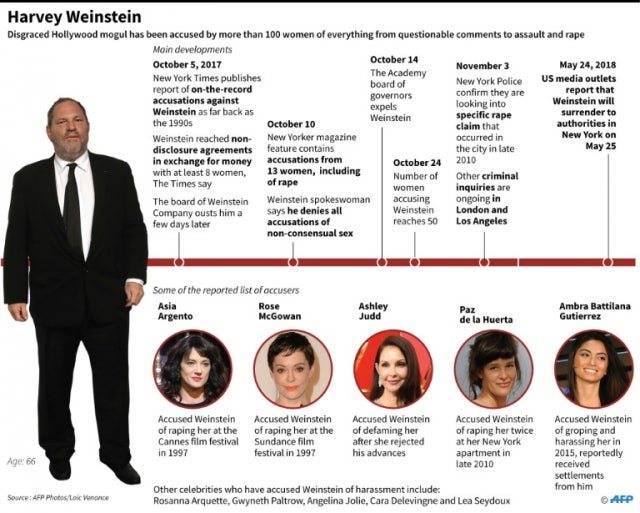 The Harvey Weinstein scandal chronology and some of his accusers. © Gal ROMA – AFP

Former actress Lucia Evans, who said Weinstein forced her to perform oral sex on him in 2004, is thought to be one of the women whose cases triggered the New York charges.

Salma Hayek, Gwyneth Paltrow and Angelina Jolie are among more than two dozen actresses who say they were sexually harassed by the producer. A few, including Asia Argento and Rose McGowan, said they were raped.

“I have to admit I didn’t think I would see the day that he would have handcuffs on him,” McGowan told ABC television.

“Today Harvey Weinstein will take his first step on his inevitable descent to hell. We, the women, finally have real hope for justice,” tweeted Argento.

The Time’s Up anti-harassment movement — launched on January 1 — said the producer “shattered the lives of an untold number of women,” adding that it looked “forward to seeing justice prevail.”

The #MeToo movement has seen people around the world come forward with cases of sexual mistreatment, leading to the downfall of powerful men across industries, including Oscar winner Kevin Spacey.

Weinstein has reportedly spent months in treatment for sex addiction. His fashion designer wife, Georgina Chapman, has left him.

But for all the media circus, experts warn that any trial — let alone a criminal conviction — would still be a long way off.

Weinstein’s lawyer is one of America’s most celebrated criminal defense attorneys. His past clients include former IMF boss Dominique Strauss-Kahn, who escaped criminal prosecution for alleged sexual assault in 2011. MKH

Weinstein to ‘surrender’ to NY authorities Friday – US media

Rose McGowan on Weinstein: ‘One win is a win for all of us’