When Def Leppard and Journey tour together, expect the hits 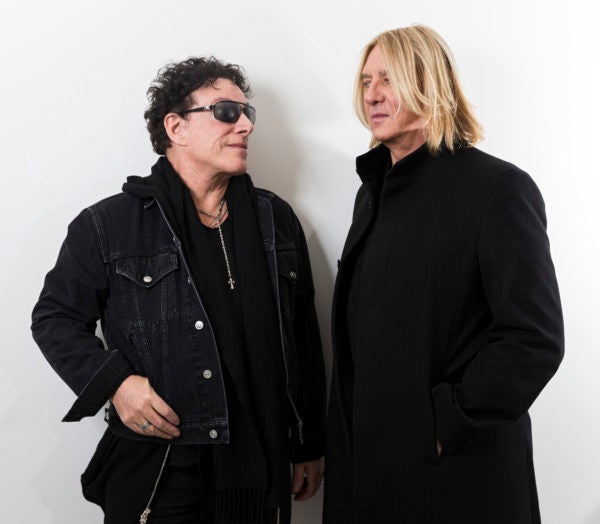 In this Jan. 23, 2018 photo, Journey lead guitarist Neal Schon, left, and Def Leppard singer Joe Elliot appear in New York to promote their 60-show tour this summer. While both bands have continued to make new music, expect the tour to focus on the hits. Image: Invision/Brian Ach via AP

NEW YORK (AP) — Def Leppard and Journey have hit the road together for a 60-show tour, but they promise there won’t be any squabbles over which band headlines each night.

The two bands will take turns closing out shows in 58 cities, including concerts at iconic venues such as Boston’s Fenway Park, Chicago’s Wrigley Field, The Forum in Los Angeles and New York’s Madison Square Garden, an arena where Def Leppard will play its first-ever full concert.

It will be the second time the two bands have toured together. Def Leppard and Journey first teamed up in 2006, and both bands remember those days.

Neal Schon, a founding member and lead guitarist of Journey, says it was a “no-brainer” to get the bands together. “Musically I think that we match up amazingly well.” Elliott agrees: “It was such a great tour, and I don’t think either of us has ever forgotten how brilliant it was.”

While both bands have continued to make new music, expect the tour to focus on the hits. Def Leppard won’t leave the stage without “Pour Some Sugar on Me” and “Rock of Ages”. Journey won’t take its bow without offering “Don’t Stop Believin'” and “Who’s Crying Now”.

“It’s not a curse to have a hit,” says Elliott. “I want to do our hits. I want to do ‘Sugar’ and ‘Photograph’ and ‘Rock of Ages’. They are the songs that have put us in stadiums. So why would you abandon them now?”

Both bands — representing the United States and the United Kingdom in a trans-Atlantic rock hug — have weathered line-up changes and the massive shifts in the music industry since the 1970s, riding the wave from vinyl to MP3s, surviving Napster, the rise and decline of MTV, and now fully enjoying the pop-culture embrace of all things from the 1980s.

“We used to tour to promote a record and now I think we put a record out to promote tour. You know, it’s wild,” says Elliott. “We survived basically because the audience stuck with us.”

Def Leppard is touring fresh from becoming one of the last multi-platinum selling acts to have its music made available on streaming and download sites. In January, Spotify, iTunes, Amazon and other digital music platforms made the band’s catalog available — and it immediately charted in America and the U.K.

What took so long?

“Our record deal lapsed in 2009 and we weren’t in any great rush to do it because, at the time, we weren’t really sure if this is just a fad,” says Elliott. “We, as a band, wanted then to go through the entire catalog and master everything properly for streaming and download, which had never been done.”

While both bands are enjoying renewed attention to its music via the internet, Elliott and Schon remain wary of what both call “the Wild West”, a place where they say their songs are streamed a trillion times and they get just $50.

“With the internet, that’s proof in itself that it doesn’t sell tickets. What sells tickets is longevity and that you’ve been persistent, and you go every year,” says Schon. “You go away too long, they’re going to forget about you. Someone’s going to take your place.”

Both men are quick to dismiss the notion that rock is dead (Elliott points to the Foo Fighters, who are “just killing it in stadiums worldwide”). But they do worry about younger bands following in their footsteps.

“It is odd that bands that have been around for 30, 40 years or whatever can tour together and we can still do really well. And we do much better than the newer bands coming up,” says Elliott.

“I’ve yet to see a band break through from where we started and go the same route we did and maintain it. Will we be talking about Greta Van Fleet and The Strokes in the year 2060? I really hope so but that’s something to be proven down the road.”

Speaking of the road, they’re still discussing the possibility of a Def Leppard-Journey onstage jam session, with members of both bands belting out a song or two together. They even joke they may write a new one.