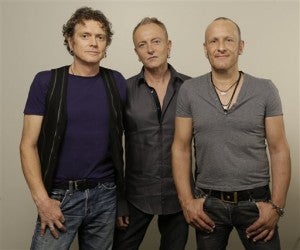 The 51-year-old musician relied on his bandmates and the thrill of performing to help him through a diagnosis of Hodgkins lymphoma (he started treatment in April). The band hit the road this summer for a monthlong tour that wrapped in July.

“We’ve actually been able to work through it,” said Campbell. “We did the shows in Europe while I was doing chemo … and mentally that was a big part of my recovery.”

“I’m glad I had the opportunity to work through it instead of stay at home and feel sorry for myself,” he added.

After more than 30 years together, Def Leppard isn’t slowing down for cancer — or anything else.

Fans can get a front-row seat to see the band at local cineplexes on Wednesday and again next week in “Def Leppard Viva! Hysteria Concert.” Filmed during a Las Vegas residency earlier this year, it shows the quintet doing something unprecedented: performing the 1987 mega-hit album, “Hysteria,” live from start to finish.

“It was fun, actually, and a totally different way of doing it,” said guitarist Phil Collen. “It was a different dynamic doing the album in full, and it was much more theatrical.”

Part of the theatrics came in the form of Ded Flatbird. Singer Joe Elliott suggested the band open for itself during its first-ever Vegas residency, but do it as a fake cover band.

“We would actually go out and pretend to be Ded Flatbird, who were supposedly the greatest Def Leppard cover band in the world,” said Campbell. “Joe gave us all aliases. We became different characters, and as the shows progressed, we kind of developed those personalities a little bit more, and that was a fun part of the show…

“Then, of course, the curtain reveal and it’s Def Leppard doing ‘Hysteria.'”

Ded Flatbird performed nightly during the nine-show engagement, playing obscure material from the early days of Def Leppard and other tracks apart from the “Hysteria” album. Ded Flatbird’s performances are included in the double CD and DVD set, “Viva! Hysteria,” out on October 22.

“We were so convincing that a lot of people didn’t actually realize it was us,” said drummer Rick Allen. “We actually got booed by a few people.”

“Because we went out and found another one-armed drummer!” Campbell quipped. (Allen lost his left arm in a car accident a year after the release of the band’s breakthrough album, 1983’s “Pyromania.”)

Next up for Def Leppard? New music.

The fivesome, which also includes bass player Rick Savage, plan to meet in Dublin in the new year to start writing.

“A whole Def Leppard album would probably take a bit long,” Collen said. “So we’re probably going to do an EP or something, get that out, then perhaps the year after, release an album.”