At Cannes, a #MeToo upheaval up and down the Croisette 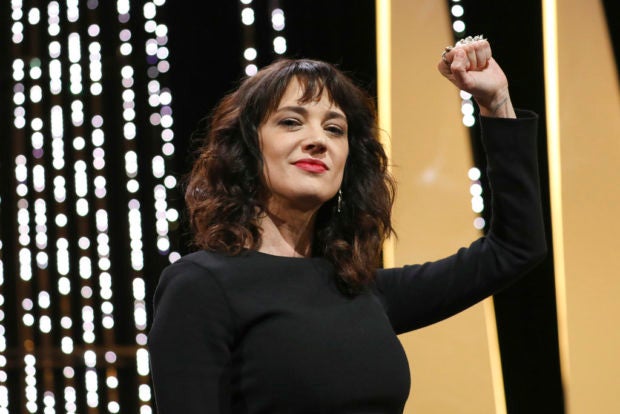 From the start to the finish, the 71st Cannes was dominated by protest and petition for gender equality, culminating in the extraordinary sight at the festival’s closing ceremony Saturday of Italian filmmaker and Harvey Weinstein accuser Asia Argento vowing justice for sexual predators in the film industry.

Argento’s excoriating speech had all the more effect because it was at Cannes 21 years ago that Weinstein raped her, she has said. Weinstein, for decades a ubiquitous fixture of the festival, has denied allegations of non-consensual sex.

Declaring that Weinstein would never again set foot at the Cannes Film Festival —”his hunting ground,” she said — Argento’s speech was the final salvo in a festival bombarded by demands for change.

The festival wrapped Saturday after 12 turbulent days of soul-searching and cinema and was defined as much by who wasn’t there as who was. Weinstein, of course, was absent. So too was Netflix, which pulled its films from Cannes after the festival ruled films must have theatrical distribution in France to compete in Cannes’ main slate.

With a few notable exceptions like Spike Lee’s Grand Prix-winning, rousingly received Ku Klux Klan drama “BlacKkKlansman,” American films were also largely AWOL, a casualty partly of Hollywood’s increasing focus on a fall-festival launching pad for Oscar hopefuls. Selfies were banned, as was, back in Kenya, the lesbian drama “Rafiki,” the country’s first film at Cannes.

Seats were left poignantly vacant for two filmmakers in competition, Iran’s Jafar Panahi and Russia’s Kirill Serebrennikov, whose home countries have prohibited either from traveling. The French filmmaking legend Jean-Luc Godard, who spearheaded the protests in 1968 that shut down Cannes amid nationwide strikes, didn’t attend but called in via FaceTime. He still walked away with a first-time award that the jury dubbed the “Palme d’Or Spéciale.”

And yet among the glaring absences, there were powerful presences. There were only three films directed by women among the 21 films in competition, but each was among the most talked-about films at the festival. Two of them took home awards: Lebanese filmmaker Nadine Labaki’s neo-realistic child poverty drama “Capernaum,” which won the Jury Prize, and Italian director Alice Rohrwacher’s farm boy fable “Happy as Lazzaro,” which tied with Panahi’s “Three Faces” for best screenplay.

Perhaps the festival’s most inedible moment came ahead of the premiere of French filmmaker Eva Husson’s “Girls of the Sun,” which is about a Kurdish battalion of women soldiers. Eighty-two women together walked the red carpet and stood on the Palais steps to, as Cannes’ Artist Director Thierry Fremaux said, “affirm their presence.”

Their number reflected the sum total of female directors whose films have played in competition in Cannes’ 71-year history.

“Women are not a minority in the world, and yet our industry says the opposite,” said jury president Cate Blanchett and, in French, Agnes Varda, from the top of the Palais steps. “The stairs of our industry must be accessible to all. Let’s climb.”

Issues of gender equality are especially acute in Cannes not just because it was for so many years a French Rivera playground for Weinstein. With elaborate red-carpet pageantry, Cannes is a massive, formally attired expression of tradition, one carefully guarded by etiquette and status. As Christopher Nolan said, introducing his glorious restoration of Stanley Kubrick’s “2001: A Space Odyssey,” Cannes is “the festival that cares the most about the history of cinema and the traditions of cinema.”

But in the era of #MeToo, its critics say, Cannes has remained too male. Only one female filmmaker (Jane Campion in 1993 for “The Piano”) has won the Palme. The inclusion in this year’s program of Lars von Trier, the Danish provocateur previously declared “persona non grata” at Cannes, was evidence to some that Cannes remains too much in the thrall of male auteurs.

Yet it was hard to miss the sweep of change at this year’s festival. Just two days after the 82-women rally, a collection of women’s rights groups including France’s 50/50 by 2020 and the U.S.’s Time’s Up gathered in a crowded seaside tent just down the Croisette to press the festival to sign a pledge for improving gender equality.

The atmosphere was electric. Blanchett’s nine-member jury, including Ava DuVernay and Kristen Stewart, came and sat front row. They watched Fremaux and other festival leaders arrive and sign a pledge to make their selection process more transparent and take other measures to improve gender equality.

“The world has changed,” said Fremaux. “We must question our history and our habits.”

How much Cannes is willing to adapt will only be apparent in the years to come. But even the clamor of this year’s Cannes was further proof of the festival’s singular position as the pre-eminent global stage for the movie industry.

The protests for gender equality included participants from dozens of different countries, with varying levels of parity that would have been impossible anywhere else.

And, as usual, the films that were celebrated spanned the globe, from Poland’s “Cold War,” by Pawel Pawlikowski, to South Korean Lee Chang-dong’s “Burning.” The Palme d’Or went to Japanese filmmaker Hirokazu Kor-eda’s “Shoplifters,” a delicate drama about whether parenthood is determined by DNA or something deeper. A gentle and lovely film by a veteran master, the universally acclaimed “Shoplifters” gave Cannes something like consensus.

But the images that most defined this year’s Cannes weren’t on the screen, but in the rallies on and off the red carpet, and in the ringing words of Argento. MKH