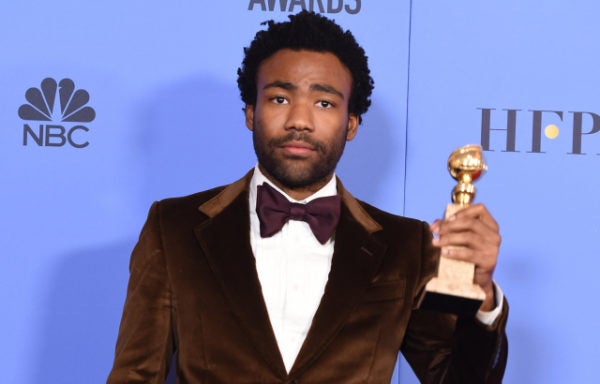 Hollywood’s latest sensation Donald Glover, eyebrow arched with the detached insouciance of a rockstar but the poise of a chess grandmaster, is trying to guess which surname Google auto-suggests when his first name is typed.

“Trump? Glover? I mean, are we going in order? Trump, Duck and then Glover,” he asks.

Whisper it in Alabama, Kentucky or Oklahoma — shout it in his home state of Georgia — but the answer is Glover, not Trump, and entertainment’s latest Renaissance man looks pleasantly surprised.

An accomplished actor, Glover is better known to rapt teenagers the world over as US hip hop phenomenon Childish Gambino.

“Oh, wow. I did it,” he laughs, practicing the ear-to-ear grin he’ll need if he ever adds an Oscar or a Tony to a trophy cabinet already groaning under the weight of Emmys, Golden Globes and a Grammy Award.

It has been quite a week for the 34-year-old actor, writer, producer, director, rapper, singer, DJ and comedian as he sits down with AFP to discuss his role as a young Lando Calrissian in “Solo: A Star Wars Story”.

At the time of the interview, Glover’s latest graphic music video “This is America” had racked up 100 million views in a week on YouTube, with its powerful takes on gun violence, racism and police brutality.

Every entertainment publication worth its salt has contributed to the white noise on what the enigmatic Glover could possibly have meant and how to interpret his edgy imagery.

“I haven’t been on the internet since last Thursday,” the normally prolific Twitterer laughs, adding that he prefers just to enjoy the moment and leave the navel-gazing to others.

As the awards roll in, Glover guards against reveling too much in past successes or daydreaming of possible future glories because a showbusiness career is “kind of like surfing.”

“You just take that wave and that pulse and you just let it carry you,” he says in his phlegmatic, not-quite-Southern drawl.

“Because it’s like freestyling in any art form: the second we start thinking, ‘Man, I’m really doing it,’ you’ll start to mess up.”

Glover has tried his hand at sketch and stand-up comedy, been a writer on “30 Rock”, an actor on “Community” and head writer, occasional director and star of acclaimed FX comedy “Atlanta”.

Previously just a promising actor with small but impactful parts in “The Martian” and “Spider-Man: Homecoming”, Glover’s turn as the galaxy’s sexiest gambler in “Solo” has elevated him to global superstardom.

Next up is another huge, iconic movie role, as Simba in Jon Favreau’s live-action version of “The Lion King”, not to mention a fourth and final Childish Gambino album.

He has been a fan favorite pretty much from the moment the first “Solo” trailer dropped, and Lucasfilm has said that a standalone Lando movie might happen one day — but not any time soon.

Glover — who divides his time between Atlanta, a couch at his studio in Los Angeles and the Hawaiian island of Kauai — was at his brother’s house when he got the top secret news that he’d landed the part.

He celebrated by getting a pizza, going home and watching “The Empire Strikes Back”. But he couldn’t keep his excitement from his father, with whom he shares a first name and a deep love of all things “Star Wars”.

“They were like, ‘You can’t tell anybody,’ but I had to tell my dad. I felt like I would be betraying him if I didn’t. I wouldn’t have the part without him,” Glover recalls.

“I love it because I think it’s an honest reflection of, like, in order for you to have this nice fancy party with all this food, all that stuff, somebody is slaving away somewhere else,” he says.

“They’re working hard. And I just love that, and I think that theme is also in ‘Atlanta’. There’s an outside world that we’re trying to get to. And right now, we’re on the bottom.”

For Glover, the most interesting aspect of the origin story of Han Solo and his childhood crush Qi’ra  played— by Alden Ehrenreich and Emilia Clarke — is the extent to which people compromise their values to get a seat at the top table.

“It becomes ‘you or them’ at a certain point. And I think that’s why I like this movie so much, because Han learns that. He’s so naive and sweet at the beginning,” he says.

“He’s like… a Bruce Springsteen song: ‘I’m gonna get outta this town, take my girl and we’re going to fly into space.’ And it’s like, ‘Yeah, it’s not that simple.’ Things change and you grow up.” CC

Nothing childish about Donald Glover

Read Next
LOOK: Ruffa Gutierrez meets Duterte, Arroyo
EDITORS' PICK
EuroMillions Superdraw: A lottery draw unlike any other is coming to the Philippines
‘Justice will be done,’ Duterte assures as he vowed probe on Jolo incident to bare ‘truth’
Water remains our saving grace right now
Smart releases Hyun Bin’s second TVC
Current dominant strain of COVID-19 more infectious than original—study
DOLE: Return of OFWs’ remains from Saudi to be ‘delayed,’ deadline moved to ‘early next week’
MOST READ
Locsin warns of ‘severest response’ if China’s army drills in SCS ‘spill over’ to PH domain
Duterte tells military: No other president looked at you the way I did
BREAKING: Duterte signs anti-terror bill into law
Go apologizes for 5-on-5 game; PBA summons Japeth, ROS rookie
Don't miss out on the latest news and information.