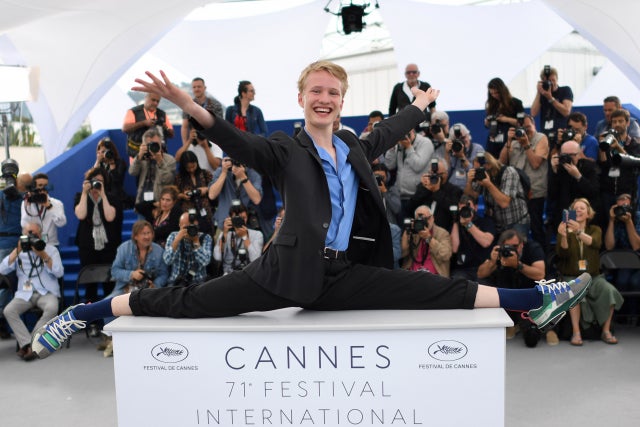 The Cannes film festival has a track record of jaw-dropping watch-through-your-fingers screen moments.

This year is no exception with a Belgian director’s debut about a transgender budding ballerina trying to force her boy’s body into executing perfect pointes drawing gasps.

Based on the true story of a 15-year-old girl trapped in a boy’s body who dreams of becoming a prima ballerina, Lukas Dhont’s “Girl”, has drawn rave reviews, with 16-year-old Victor Polster hailed for his stand-out cinematic debut.

Dhont was still in film school when he stumbled across the true story of a non-conformist 15-year-old in the throes of gender reassignment who enrolled at one of Belgium’s top dance academies.

The ordeal of trying to bend her body to the demands of the bar is compounded by Lara’s increasingly desperate efforts — culminating in a horrific act of self-harm to hide her male attributes.

Yet the film still manages an upbeat feel-good ending.

“This incredibly brave internal battle profoundly moved me,” Dhont told AFP, who read about the girl’s trials in 2009.

“I soon decided this would be the theme of my first film.”

Dhont, who grew up in a Flemish family where boys were expected to “be boys”, found echoes of his own childhood in the girl’s story.

“When I was little, my dad wanted me to be in the Scouts. Every fortnight, he would take my brother and me to play in the mud camp with other kids. We both hated it.”

“We much preferred theater, dance and song, where we would express ourselves. You can imagine our confusion when we learnt that these activities were seen as being ‘for girls’,” said Dhont who suspended his artistic endeavors for a few years “because I didn’t want people to make fun of me.”

Polster, a professional dancer, transformed himself physically for the role, learning to make his movements more feminine and working with a voice coach to reach a higher pitch.

“Lara’s story touched me even if it wasn’t easy to play,” said the teen from the Royal Ballet School of Antwerp, who was accompanied to the festival by his mother.

“For people whose bodies don’t conform to their identity, there is no choice. Getting their real sexual identity is absolutely crucial to them,” he said.

In a moment of life imitating art the svelte actor overcame his shyness during the photocall for the film to perform the splits on a table for the cameras.

“Girl” comes nearly two decades after Hilary Swank strapped down her breasts to play a 20-year-old woman from Nebraska trying to live like a man in “Boys Don’t Cry”.

Issues relating to gender identity have become more mainstream since then, driven by the high-profile transition of personalities like Bruce Jenner, the former US decathlete who became Caitlyn Jenner in 2015.

Dhont hopes his film — whose mutilation scene has drawn comparisons with a self-circumcision in Lars Von Trier’s 2009 Cannes shocker “Antichrist” — will further the normalization of gender fluidity.

“It’s good if my film encourages different thinking about masculinity and femininity,” he said. AB

Cumberbatch Cold War thriller is snapped up at Cannes