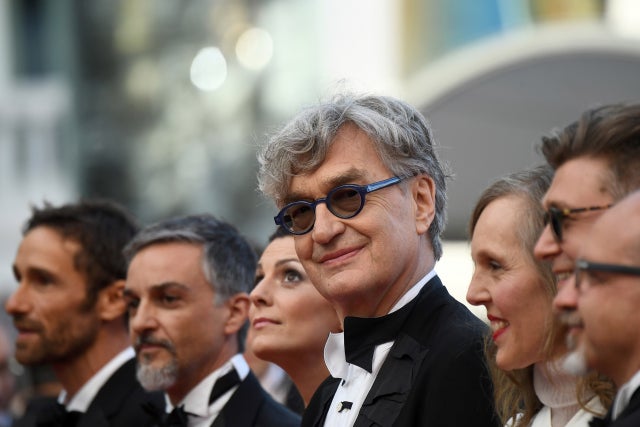 Italian producer Ignazio Oliva (L), German director Wim Wenders (C) and his wife Donata Wenders (3rdR) pose as they arrive on May 13, 2018 for the screening of the film “Pope Francis – A Man of His Word” at the 71st edition of the Cannes Film Festival in Cannes, southern France. © Anne-Christine POUJOULAT / AFP

There is a killer moment in the new film “Pope Francis — A Man of His Word” when you realize what he is up against.

The Argentine is dressing down the cardinals and bejewelled princes of the Curia who run the Catholic Church, lacerating them for their greed, back-stabbing and lust for power.

The scandal-hit, Italian-dominated body is full of people leading immoral double lives who “possess a heart of stone and a stiff neck”, he tells them in German director Wim Wenders’ remarkable insight into the leader of the world’s 1.2 billion Catholics.

“Pay a visit to the cemeteries” and look at those “who thought they were immortal, immune and indispensable,” Francis urges them in the feature, which premiered late Sunday at the Cannes film festival.

“You see the sharp faces of some of these cardinals who are rich and ambitious,” said Wenders, who interviewed the reforming pontiff over several months for the portrait.

“But you can also see other archbishops thinking, ‘Yes, this is why we elected you.’ As Francis said, you cannot combat the diseases of the world without examining yourself first.”

The picture that emerges of Francis from Wenders’ unprecedented access is of a man determined to radically transform the vast wealthy institution into “a poor church for poor people”.

And Wenders, the maker of such classics as “Wings of Desire”, “Paris, Texas” and “The Buena Vista Social Club”, believes this pontiff has the steeliness to do it.

Many in the Curia “think he is going too fast and too far,” according to Wenders, and have been digging in with traditionalists to resist him.

“But I think the opposite,” said the filmmaker. “I think Francis is stepping on the brakes in order to take them all along.

“Yet also he is fearless. He knows what has to be done and he wants to push it as far as he can knowing that he is not young anymore.”

For Wenders, a lapsed Catholic who rediscovered his faith in a “friendly God” after the death of his doctor father, the 81-year-old is a revolutionary.

“When you look him in the eye you see this is a very loving man who really likes people. He is as honest as a man can be and you see the courage in his eyes.

“His message — that we are equal and we have to treat each other as equals — is why people say he is a communist. We cannot leave people behind in the dust. It is a tough message and he doesn’t hesitate with it.”

Francis is a radical just like the medieval saint from whom he took his name, Wenders argued, “who like him wanted to go back to early Christianity… when the church was an organisation of poor people.”

Call from the Vatican

“St Francis of Assisi was also the first ecologist,” said Wenders, who was “amazed” by the depth of the pope’s understanding of climate change and his warning that the global “mania for growth” is threatening mankind.

“That growth is coming at the expense of the poor majority… who are suffering first and worst from climate change,” said Wenders.

The director said the Vatican contacted him out of the blue asking whether he would be interested in talking to the pope.

“I was given carte blanche,” he told AFP, and access to the Vatican’s video archives. “There was no interference whatsoever,” he insisted, despite the film being co-produced by Vatican television.

Wenders said he was also touched by the pope’s deep tolerance of other religions and lifestyles.

“He says don’t try to convert anybody, just try to convince them to be of goodwill and to accept each other. His firm belief is there is no difference between people. That is revolutionary — communists don’t have that message.”

But despite trying to lead by example by living modestly, the pope knows his power is limited. “All he has are his words,” Wenders said.

“Each time he left us after the shoot, he would look into our eyes and ask each of us, ‘Please pray for me.’

“There are a lot of people praying for him, praying that he can do it,” Wenders said. MKH