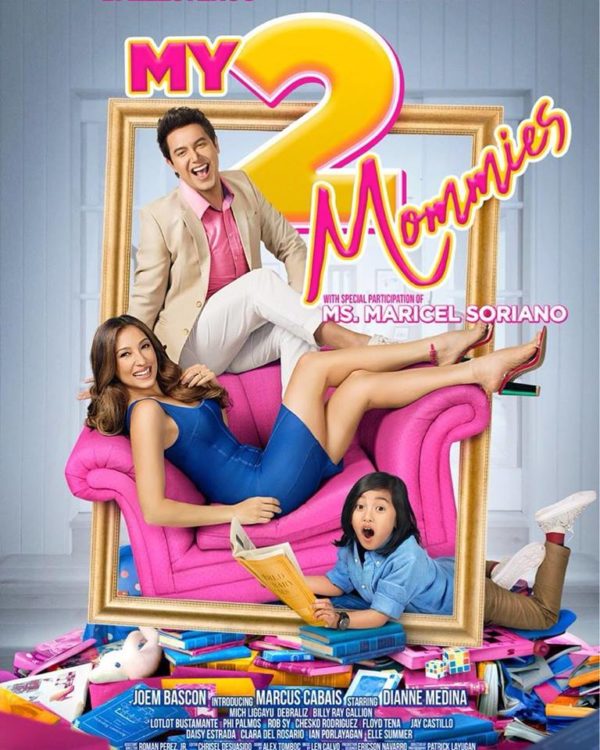 ‘My 2 Mommies’ by Regal Entertainment, Inc. reminds me so much of a mix of inspiration and influences from two foreign movies ‘The Birdcage’ and ‘Mrs. Doubtfire’ which came out in the 90’s and starred the late, great comedian and actor Robin Williams.

However, once you get past the middle portion of ‘My 2 Mommies’ this movie takes shape and comes into its own without any further comparisons to any local or foreign movie.

That is how brilliant an actor Paolo Ballesteros is!

I think one has to respect Paolo’s acting chops. For him to be that funny, silly, and wacky takes tons of talent and intrepid guts because comedy is not for everyone simply for the reason it is difficult to pull off being funny without coming out forced, trying hard, and downright stupid.

Solenn Heussaff proves to be a very effective actress, both in drama and comedy. By nature, Solenn Heussaff being a feisty, spunky, and adventurous person, she can switch gears effortlessly and never appears she is “acting”. By far, ‘My 2 Mommies’ is her most significant movie role. I see her being tapped more often to give strong performances as she shows in this movie.

In general, the whole main cast of ‘My 2 Mommies’ is good in their respective roles because one can sense they knew where to be, what to say, and when to make their presence felt in the movie. That fact can be credited to director Eric Quizon for making the cast operate and work like a well-oiled machine without breakdowns and hiccups. I can tell there were not a lot of retakes in any of the scenes of the movie.

“The Diamond Star” Maricel Soriano is a perfect fit to play the role of Paolo Ballesteros’ mom and their onscreen chemistry was clearly evident. Although she had limited onscreen time, that fact alone got the moviegoers in attendance to cheer for her each time she had a scene. She is still one of the most beloved veteran actresses around.

One of the very few things, though, I did not like about ‘My 2 Mommies’ are some lines and dialogue alluding to straight men and women. I felt they were too harsh and offensive to hear. The ranting and heated exchange of words should have been toned down.

More refinement, sensitivity, and polishing in the script, particularly coming from Paolo Ballesteros’ character, are called for because parents, children, and more conservative families constitute the moviegoers who will be watching ‘My 2 Mommies’.

Now, with that said, luckily, that negative aspect was overshadowed rather quickly by the back-to-back funny scenes and overall superb acting by Paolo Ballesteros, Solenn Heussaff, Maricel Soriano, Joem Bascon, Marcus Cabais, Mich Liggayu and Dianne Medina. These seven actors and actresses alone already represent a very solid and capable cast. Hopefully, in the near future, any of the above mentioned seven can work together again in any combination in the comedy genre.

Dianne Medina proves one more time she is always good to be cast in a romantic or adventure comedy because she is a good fit for this kind of movie genres. Even in a supporting role, she lends “star power” in every scene she is a part of and she is “eye candy” to look at. You will always need someone like a Dianne Medina to fill up the vacant roles because she does have a certain look that is needed to make the cast feel complete.

Lastly, before I forget, a brand new child star is born in Marcus Cabais. He plays the role of Tristan whose parents are played by Paolo Ballesteros and Solenn Heussaff in ‘My 2 Mommies’. This confident, cool, smart kid was the glue that held this movie together in my opinion because the plot of the movie is about his character. Marcus Cabais will pleasantly surprise you at how good he carried himself throughout as if he was already a veteran of many movies. He acts as though there were no cameras in front of him. And he can speak fluent English and French, and who knows how many other languages, too! There is no question that he is the central point of ‘My 2 Mommies’.

I recommend watching this movie but be strongly advised that kids cannot watch this unsupervised and without a parent or trusted guardian by their side because some words and scenes do need explaining to them.

Overall, ‘My 2 Mommies’ is enjoyable, amusing, hysterically funny, charming. And the movie does have a lot of heart, too.

*Were it not for some inappropriate language and scenes, I would have scored ‘My 2 Mommies’ an 8/10.