Alessandro Nivola’s story on how he met his wife, actress Emily Mortimer 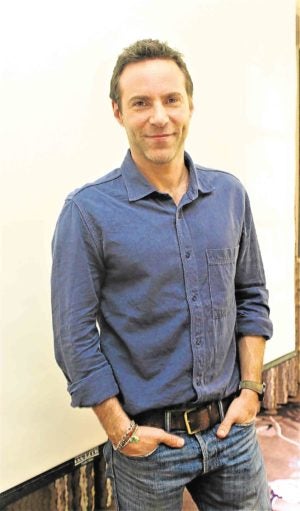 LOS ANGELES—Most actors are good storytellers. But some are better than others, especially in the way they share anecdotes when answering questions.

Alessandro Nivola, whose credits include the current film, “Disobedience,” “American Hustle” and “Selma,” is one of the actors who can narrate anecdotes, as well as express their characters’ emotional stories on the screen.

In our recent interview, the Massachusetts native engaged us when he recounted how he met Emily Mortimer, the English actress behind such films as the coming “Mary Poppins Returns,” “Lars and the Real Girl,” the 2006 “The Pink Panther” and “Dear Frankie.”

“I’ll tell you a little story,” Alessandro began, his eyes twinkling. “I was living in Los Angeles. This was the late ’90s. I had just moved here in Los Angeles.

“I was a young actor, and next door to me in this apartment building in West Hollywood where I was living was Leonard Cohen’s son, Adam. He was a musician and he, like me, had just moved from New York and was trying to make it. We were hanging out together, drinking buddies and everything.

“I got cast in Kenneth Branagh’s film adaptation of Shakespeare’s ‘Love’s Labour’s Lost.’ I called Adam and said, ‘Hey, man. I’m heading out in a couple of days to London for a couple of months because I’m going to do this movie.’ He was like, ‘Oh, you have to come over to my apartment. I’ve got something for you.’

“So, I came over to his apartment. He went digging in these drawers. He pulled out a whole bunch of lint, paper clips and stuff. And there was this rolled up piece of paper. He said, ‘OK, this is the telephone number of the most gorgeous girl in London. I was there touring with my band, and I was called in to audition for ‘Moulin Rouge.”

“He said, ‘I was sitting in the waiting room waiting for my audition, and there was this amazing girl sitting there. I struck up a conversation with her. I said, ‘Listen, I’m playing a show tonight. Do you want to come? Can I have your number? And I’ll call you and tell you about it.’

“‘She said, ‘OK,’ and so she gave me her number. I called her. She never called me back. I never saw her again, but you have to call her.’

“So I put the piece of paper in my pocket and said to him, ‘Whatever.’ I flew to London. I arrived at my hotel room and dumped my bags. There was a packet of information about the film there. I opened it up. I was brushing my teeth, looking through it, and I came to this name. It looked familiar.

“I emptied my pockets out and unrolled the piece of paper. It was her. She was in the movie. So, on the first day of rehearsal for the film, I looked around and said, ‘Who’s Emily Mortimer?’ They pointed over to this girl. I was like, ‘Oh, my God!’ Adam was right.

“I went up to her and said, ‘Listen, I have your telephone number.’ She was like, ‘What are you talking about?’ I was like, ‘I’m not stalking you or anything, but this friend of mine next door got your number and you never called him back, but I have it in my pocket.’

“Two weeks later, I asked her out. We spent the night and, we’ve been together ever since.” Indeed. Alessandro and Emily have been married since 2003.

We asked if Emily remembered giving her number to Adam. “She said the main thing that she remembered about him was that everything he said was Adam Cohen,” Alessandro said with a grin. “She remembered liking him, but she just hadn’t taken it that seriously.”

And Adam’s reaction to how the story ended? Alessandro replied, “Adam was so jealous. I was like, ‘What are you talking about? You gave me her number.’ I dragged her back with me to LA. One of the first people she met was Adam Cohen, my next-door neighbor.”

Alessandro and Emily’s union has produced two kids. Even the way the dad talked about his children was engrossing.

“I have a 14-year-old boy named Sam and an 8-year-old daughter named May,” Alessandro said. “Sam got his sh*t together to the point of where it’s annoying. In fact, just about an hour ago, I got a text from my wife … where she wrote (he pulls out his phone and reads the text), ‘Last night at dinner, Sam told me he’s reached the age of understanding that he’s more intelligent than both his parents (laughs).’

“My daughter is just like this wild creature. She sings songs all the time. She has a babysitter who’s in a cool band. My daughter has written all these songs at 8 years old. They started recording them with full production. This is her latest ‘hit’ (he plays the song on his phone).”

In director Sebastián Lelio’s “Disobedience,” Alessandro plays Dovid, the rabbi in an Orthodox Jewish community in London. He is married to Esti (Rachel McAdams). 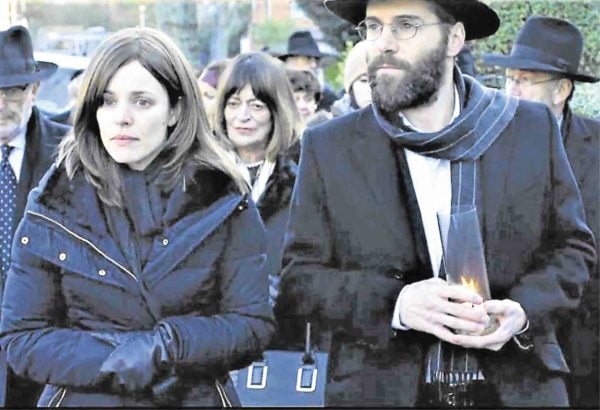 When Ronit (Rachel Weisz) returns to the community that shunned her for her attraction to Esti, her childhood friend, their passion for each other is rekindled, testing the boundaries of faith, sexuality and the marriage of Esti and Dovid.

Alessandro talked about the love scene between the two Rachels that stirred buzz.

“Esti hasn’t been able to get pregnant, which is why there’s a whole set of symbolism about the spitting into the mouth (by Weisz) being like an insemination of some kind. That was Sebastián’s little private idea.

“Because Esti becomes pregnant after that sexual encounter with Ronit for the first time. But Esti and Dovid probably have sex somewhat regularly. It just doesn’t have the kind of passion she has with Ronit.”

Alessandro totally disappears into the Rabbi role, almost unrecognizable. It’s one of his best performances. “The character is within the confines of a community that has chosen to live by strict religious laws,” he said. “He is a fairly open-minded person.”

Dovid is one more British character that the American actor has played over the years. “There’s no British in me,” he clarified. “It’s a common mistake because apart from this role, I’ve played a lot of Brits. But I have a British passport. I have two passports, so technically, I am British.”

Alessandro also talked about his religious upbringing, which is unlike Dovid’s. “I grew up among Bohemian artists who were not very religious. My grandmother was quite spiritual. I was sent to a Catholic school only because we were living in rural Vermont, and it was the only half-decent school there. But I don’t practice any religion myself.”

On how he became an actor, Alessandro, who started in theater, answered, “From a very early age, I felt least self-conscious when I was performing, especially in a role that was very different from myself and where I could completely disappear into somebody else’s skin. It’s partly because in those times when I’m performing and diving into a role, I feel liberated.”

TAGS: Alessandro Nivola, Only In Hollywood