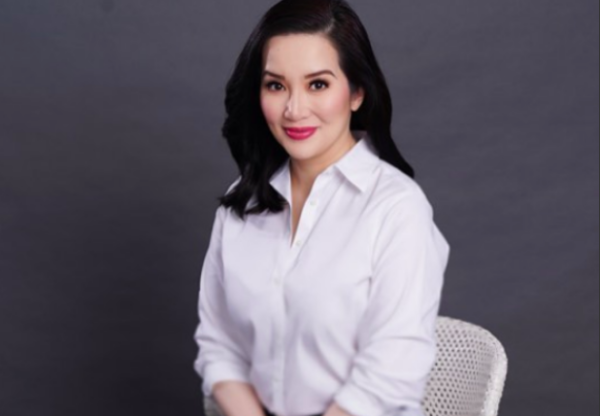 Hell hath no fury like the Queen of All Media scorned. Kris Aquino went on a tirade against ex-husband James Yap over the weekend after his birthday message to Bimby irked Aquino. It was an anger, it seems, not borne out of impulse but of having been silent for so long.

However, it looks as if things weren’t entirely finished as Aquino went after broadcaster Korina Sanchez, after the latter featured James Yap and his family on her TV show, Rated K. The episode, which aired last night, tackled celebrity babies, one of which was Yap’s first child with girlfriend Michel Cazzola.

(I have really had enough. It’s simple, my brother asked me a favor just once, not for himself but for a candidate he endorsed. I did it for him because I love him. I accepted all criticisms because of that endorsement.)

Aquino mentioned that she went to Davao thrice in the past, back in 2010 and 2013 to campaign for Mar Roxas as the Liberal Party’s vice president, and Senators Chiz Escudero and Grace Poe. She also went to Davao before for a Kris TV shoot.

(PRRD, in every instance that we met, has been good to me. The feature that the wife of Mar Roxas put out tonight is a slap on my face.)

(Yes I take it personally because I risked our future and the future of my kids without expecting anything in return. And this is what I and my children get in exchange, the deadbeat dad being put on the spotlight.)

Her post about Sanchez caught the attention of thousands of netizens, with many offering their support to her. A certain Jo-Anne, commented, “May say ba ang host sa story na gustong ilabas ng writers/[researchers]? Like pwede ba silang mag NO sa ire-feature nila at all?” (Does the host have a say on what the writers/researchers want to put out? Can they say “no” about what to feature at all?)

“YES. Especially if you are also the show’s producer,” replied Aquino, pertaining to Sanchez.

Aquino wrote back, “NANADYA.” (She did it deliberately.) 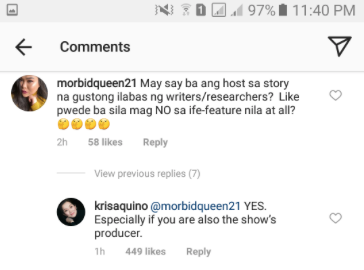 Hours after her rant against Sanchez, however, Aquino seemed to have calmed down as she wrote another post on Instagram, this time apologizing to President Rodrigo Duterte, former interior and local government secretary Mar Roxas, and her brother former President Benigno “Noynoy” Aquino III.

“I apologize for including politics, but that is the unfortunate baggage & responsibility of my last name,” wrote Aquino. “But i will not delete any posts because my anger comes from the heart of a mother who has been unnecessarily stepped on by someone who has been blessed w/ a loving & devoted husband & does not know the hardship of having to go it alone.”

(Please listen to the song.) I know I’ve unleashed a double edged sword. I know i’ve made enemies, and i’ve also found kindred spirits in MOTHERS who like me have felt that they have had ENOUGH & they had to take a stand & say I AM NOW FIGHTING BACK. I also know i have personal demons i need to exorcise because no matter what i still want to be someone my sons can be proud of… so i will collect my thoughts & try my best to forgive regardless of the fact no remorse has ever been shown. I apologize for including politics, but that is the unfortunate baggage & responsibility of my last name. But i will not delete any posts because my anger comes from the heart of a mother who has been unnecessarily stepped on by someone who has been blessed w/ a loving & devoted husband & does not know the hardship of having to go it alone (rewritten after some prayers)… I do sincerely apologize to my brother. And I apologize to President Duterte. And Mar, to you i am sorry. In the same way i would always wonder why i would be dragged into issues not of my doing- i was guilty of that tonight. I’ll be back after i have found my peace. Until then, to all those who still found it in their hearts to understand & embrace me & my sons- you have my eternal gratitude. #laban

“I do sincerely apologize to my brother. And I apologize to President Duterte,” added Aquino. “And Mar, to you i am sorry. In the same way i would always wonder why i would be dragged into issues not of my doing- i was guilty of that tonight.”

As of this writing, Sanchez has yet to speak up about the issue. JB