Who will stop Meryl? 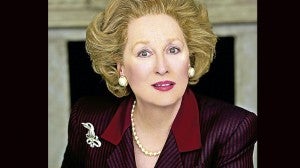 STREEP. Nominated for “The Iron Lady.”

Will Meryl Streep’s unanimously acclaimed performance as “The Iron Lady” earn her another trophy in the Golden Globe Awards on Sunday (Monday morning, Manila time)?

Or will one of the following pull a surprise over Meryl and win the Best Actress-Drama honors? The other contenders are Glenn Close (“Albert Nobbs”), Viola Davis (“The Help”), Rooney Mara (“The Girl With the Dragon Tattoo”) and Tilda Swinton (“We Need To Talk About Kevin”).

There are no clear frontrunners in the other categories, which should make for a suspenseful evening at the Beverly Hilton Hotel in Beverly Hills. But the results of the Sunday event will establish the trend in a year where the race is virtually everyone’s ballgame.

In the Best Picture-Drama field for example, there’s no dominant film. Any of these nominees may take home the Golden Globe (GG): “The Descendants,” “The Help,” “Hugo,” “The Ides of March,” “Moneyball” and “War Horse.”

While “The Artist” leads the GG nominations with six nods, it faces stiff competition in the Best Picture-Comedy or Musical category from “Bridesmaids,” “Midnight in Paris,” “My Week With Marilyn” and “50/50.”

In the Best Actress-Comedy or Musical race, Kristen Wiig (“Bridesmaids”) and Michelle Williams (“My Week With Marilyn”) are reported as frontrunners but don’t count out Charlize Theron (“Young Adult”), and Jodie Foster and Kate Winslet, both from “Carnage.”

The Best Actor-Comedy or Musical contest may be a clearer one, based on the buzz for “The Artist.” In Jean Dujardin way’s are Ryan Gosling (“Crazy, Stupid, Love”), Joseph Gordon-Levitt (“50/50”), Owen Wilson (“Midnight in Paris”) and Brendan Gleeson (“The Guard”).

Nowhere is the open race more evident than in the Best Animated Picture competition. The year 2011 saw a bounty of outstanding animated films so for the first time in many years, a Pixar film is not a shoo-in as the winner. “Cars 2” has to fend itself from just as strong fellow nominees: “The Adventures of Tintin,” “Arthur Christmas,” “Puss In Boots” and “Rango.”

Iran’s “A Separation” may appear to have the edge right now in the Best Foreign Language Film derby on the strength of the awards it has collected. But the Iranian entry could still be edged out by China’s “The Flowers of War,” USA’s “In the Land of Blood and Honey,” Belgium’s “The Kid With a Bike” and Spain’s “The Skin I Live In.”

When “The Help” was released in August last year, its Octavia Spencer and Jessica Chastain were early favorites to slug it out for the Best Supporting Actress award. But the arrival of the following films later in the year deepened the competition: “The Artist” (Berenice Bejo), “Albert Nobbs” (Janet McTeer) and “The Descendants” (Shailene Woodley).

For Best Director, “The Artist’s” Michael Hazanavicius is up against equally strong contenders: Woody Allen (“Midnight In Paris”), George Clooney (“The Ides of March”), Alexander Payne (“The Descendants”) and Martin Scorsese (“Hugo”).

Will Madonna go on stage to collect her second GG? She, Julie Frost and Jimmy Harry are in the running for the Best Original Song Award with “Masterpiece.”

She is pitted against Elton John and Bernie Taupin (“Hello Hello” from “Gnomeo & Juliet”), Glenn Close and Brian Byrne (“Lay Your Head Down” from “Albert Nobbs”), Mary J. Blige, Thomas Newman and Harvey Mason Jr. (“The Living Proof” from “The Help”) and Chris Cornell (“The Keeper” from “Machine Gun Preacher”).

Read Next
When guests do better than TV program hosts
EDITORS' PICK
‘Panic buying’ of vaccine feared may lead to oversupply, wastage
No sea row compromises in Sino vaccine talksː Galvez
New Year, New Rediscoveries
Is your company a growth champion? Stand up and be recognized!
Acer Philippines welcomes you to its first flagship store
16 new COVID-19 patients confirmed to be UK variant carriers — DOH
MOST READ
Ate Vi’s message to those against ABS-CBN’s franchise renewal
Of victims and saviors: Sex work amid the pandemic
OVP spokesman tells Mocha Uson: Don’t drag us into your nonsense
UST students protest dismissal of Grade 12 student
Don't miss out on the latest news and information.