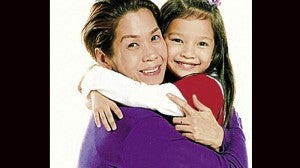 POKWANG AND MANABAT. Portray mom and daughter in “A Mother’s Story.”

The cautionary tale John-D Lazatin’s “A Mother’s Story” tells is as relevant as the stories we read in the newspapers these days. After all, more than a million Filipinos leave the country every year to seek greener pastures abroad—legally or otherwise. Even more alarmingly, the Overseas Filipino Workers (OFW) sector now comprises 11 percent of the whole Filipino population! —What does that say about our government’s (in)ability to provide for its people?

Comedienne Pokwang seeks dramatic credibility in Lazatin’s OFW drama, about Remedios Santos, who leaves her jobless husband, Gerry (Noni Buencamino), and their two kids, King and Queenie (Rayver Cruz, Xyriel Manabat), behind to grab her share of the American pie—as an illegal alien.

On the US West Coast, Medy manages to land odd jobs with the help of an old friend, Helen (Beth Tamayo). What she earns, however, isn’t enough for her perpetually needy family. So, to make more, she grudgingly agrees to work as a housekeeper for two lawyers, who turn out to be—wolves in sheep’s clothing!

Seven years later, Medy finally finds her way back home—but, not with welcoming arms: Her spiteful son has become distant and verbally abusive, and her sickly daughter doesn’t know who she is! Worse, her husband has found a “pastime” that threatens the integrity of their family! What to do?

More than the multipronged themes it tackles, Lazatin’s tearjerker creates a heartbreaking portrait of a woman who just wants a comfortable life for her loved ones. Like many Filipinos living below the poverty line, Medy’s dire situation leaves her with no choice but to grin and bear life’s punches. But, as the movie’s prevailing sense of morality cautions, two wrongs can’t make a right.

The details of the exposition play out like episodes from a convoluted telenovela—but, Senedy Que’s screenplay effectively finds telling nuances and resonances to the Pinoy sensibility that are easy to empathize with (those humongous balikbayan boxes, our penchant for online communication, our eagerness to please, and our knack for self-deprecation).

Lazatin tells the story out of order—a nonlinear style that allows the film to zero in on two narrative foci: Medy’s life in the US, and the aftermath of her North American ordeal—each littered with a series of dramatic upheavals.—But, told this way, the production feels more episodic than cohesive.

Daria Ramirez (as Medy’s mom, Choleng) and the adorable Manabat (somebody, give this child a solo starrer already) provide ample thespic support—but, their roles are too decorative to matter.

On point of performance, it’s the refreshing Tamayo who comes on strongest, as Pokwang’s effusively “helpful” best friend.

The film’s biggest misstep is the casting of Pokwang—herself a former OFW. She satisfies the role’s Everywoman quality—but, apart from those perfunctory “woe-is-me” moments, she lacks the sensitivity, skill and insight to consistently limn her character from start to finish. Curiously, even her occasional comic zingers aren’t all that effective.