‘Bourne Legacy’ movie starts filming in the heart of Manila 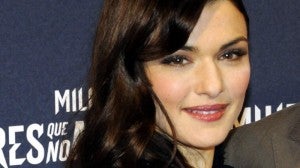 MANILA, Philippines—Venus Reinoso, 22, said she felt the shivers after seeing Academy Award-winning actress Rachel Weisz in the flesh Wednesday morning, right in the middle of the San Andres Public Market in Malate.

The British actress arrived in Manila on Sunday night for the filming of the Hollywood spy-thriller “The Bourne Legacy.” Weisz, dressed in a black tank top and blue jeans, walked a total of seven minutes from her van that was parked at the nearby San Andres Complex to the actors’ holding area in Barangay 705. She later met up with director Tony Gilroy, who was in a white button-down shirt and denim pants.

“Rachel said she couldn’t believe people in the Philippines know her,” Reinoso said in Filipino. “Is she kidding? I’m her No. 1 fan.”

Reinoso, who traveled all the way from Quezon City, said Weisz was roughly 5-foot-eight tall and was “really really beautiful in person.” Reinoso added that she was about to take pictures of the actress with her camera phone when a production staff member stopped her.

Wednesday was the first of a 45-day shoot in the Philippines. Filming will also take place in the Navotas fish port, Marikina public market, Jones Bridge, Ramon Magsaysay Boulevard, Ayala Avenue and Pasay-Taft Rotonda. Some parts will be shot in scenic spots in El Nido, Palawan.

Manila will serve as the setting for the film’s climax or the last 20 to 25 minutes. In a previous interview, Film Development Council of the Philippines (FDCP) chair Briccio Santos said Manila would be part of the story. “What I know is that Bourne’s group comes here in search of a rare medication and some forces try to stop them,” he explained.

During Wednesdays shoot, Weisz was made to buy medicine from a local drug store located on Purok (zone) Singko, then a chase ensued all the way to a chapel on Asuncion Street, according to source who requested anonymity.

In a nearby set, a “major actor,” believed to be Academy Award-nominee Jeremy Renner (“The Hurtlocker”), rehearsed his jump from a three-story building to a two-story house. Actual filming of the scene happens on Thursday, according to the source.

Toteng Picados, who has been living in the area for six years now, claimed he saw Renner on Monday. “It’s possible that he wanted to see for himself how far the jump would be,” Picados said in Filipino.

When the Philippine Daily Inquirer called up Philippine producer Lope “Jun” Juban Jr. to verify the information, he said this was “highly unlikely. (Picados) could have just seen one of the American stuntmen rehearsing.”

“I’m very excited about this,” Picados shared. “I’ve been awake as early as 6 a.m. I’m not at all bothered by the chaos. I’m used to the noise and because I live close to the public market.”

Bike shop owner Sonia Prieto, however, was disgruntled. She said her business was affected by the road closure around the public market. “My clients are complaining. Nahihirapan silang pumasok (They’re having a hard time entering the area.) There’s also a big truck blocking the front of my store. I heard that this would go on for four more days,” she said.

Parked on Leveriza Street were 10 trailer trucks, some marked with “sound and video,” “grip,” “lighting and effects” and “props.” On stand by were an ambulance, an all-terrain vehicle (ATV) and a truck carrying power generators.

Twenty five personnel from the Metro Manila Development Authority (MMDA) were deployed in the area since 4 a.m. “There’s still no word from our office as to when we could leave and go home,” MMDA employee Rogelio Nuiz told the Inquirer at noon.

“The first day of filming went well. They were mostly day scenes and interior shots,” said Juban, adding that today’s shoot would be “more or less in the same area. There would be exterior shots, too.”