Stars affected by violence join students’ gun-reform rallies in US 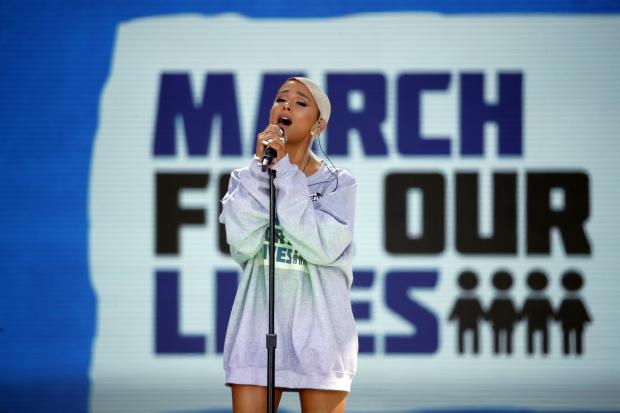 Ariana Grande performs “Be Alright” during the “March for Our Lives” rally in support of gun control, Saturday, March 24, 2018, in Washington. (Photo by ALEX BRANDON / AP)

Still, the protests were deeply personal for some of the celebrities involved.

Jennifer Hudson, who performed “The Times They Are A Changin’” to cap Saturday’s March for Our Lives rally in Washington, DC, alluded to the shooting deaths of her mother, brother and 7-year-old nephew in 2008.

“We’ve all lost somebody. … We’ve all got a purpose. And we want what? We want change,” she said, encouraging the vast crowd to join her in song.

McCartney said his decision to take part in the New York City rally was prompted by the 1980 Manhattan shooting death of John Lennon, his former Beatles bandmate.

“One of my best friends was killed in gun violence, right ’round here, so it’s important to me,” he told CNN.

Asked what he hoped could be accomplished by the event, McCartney opened his jacket to show the slogan emblazoned on his black T-shirt: “We can end gun violence.”

Hudson, appearing tearful as she concluded her appearance, was backed by members of a Washington choir and survivors of the Feb. 14 Parkland, Florida, high school shooting. Students from the school led rallies attended by hundreds of thousands of people in the nation’s capital and other US cities.

“This song is dedicated to Stephon Clark, Decynthia Clements and all the unarmed black men and women killed by police weapons,” Mensa said before performing “Now We Could Be Free.”

Grande encountered another iteration of violence when her 2017 Manchester, England, concert was bombed, killing 22 people and injuring scores of others.

Schumer, the actress-comedian and cousin of Senate Minority Leader Chuck Schumer, a New York Democrat, spoke to Parkland survivors attending the Los Angeles rally, telling them the violence they endured has to stop.