Real lovers JaDine on the downside of making romantic films 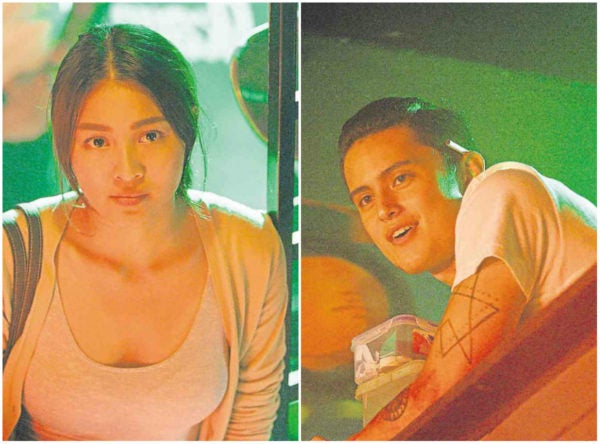 Being real-life lovers makes working on romantic movies easier for James Reid and Nadine Lustre for the most part.

The only downside? Pretending that they’re falling in love with each other for the first time.

“It’s hard to act as if [what we have] is new love, because we’re so comfortable with each other already; we’re so close. Acting like it’s our first kiss … it gets hard,” James said at a recent press conference for his and Nadine’s new movie, “Never Not Love You,” which opens in cinemas on March 31.

Nadine agreed, adding that, her mannerisms and tendencies when interacting with James do betray her at times. “I would get too touchy and I had to be reminded by our director, Antoinette Jadaone, that our characters aren’t that close yet,” she said.

“Back then, there was still a bit of reluctance or shyness, but we have become used to it all now. So, it has become hard for us to act out the characters’ ‘firsts’ as a couple,” she said.

In “Never Not Love You,” James plays Gio, a “bratty” freelance graphic designer, who falls for Joanne, a resolute and ambitious management trainee. However, their dreams and life choices eventually lead them to different paths, cutting short their “young and reckless” love affair. A few years later, they see each other again, only to find out that things aren’t the way they used to be.

“I’m sure the people are used to seeing us do typical rom-coms, so we want to do something different; something more dangerous, daring, I guess,” he said. “As we get older, we need to try new things, push the limits. And right now, I’m happy with what we’re doing.”

Meanwhile, Nadine pointed out that the film isn’t necessarily “daring,” but rather, “real, raw and true to life.” “We’re just excited to try new roles,” she said.

The movie, which was mainly shot in London, touches on long-distance relationships and that classic dilemma of having made to choose between love and career.

“You really have to sacrifice and let something go. Of course, there will be consequences. But at the end of the day, it’s your choice and you have to live with it,” Nadine said.

James, on the other hand, revealed that he once gave up love for a career opportunity. “I did it before, a long time ago. Sometimes, to grow, you need to be apart. Sometimes love can be the thing that’s holding you back,” he said.

Luckily, James and Nadine don’t have to deal with such a problem in their own relationship. Their love for each other has only grown stronger and has made them “better persons.”

“Compared to my past relationships, this has been more mature. I grew up a lot,” James said. “We started out as friends, so we have a really strong foundation.”

“We started from scratch and built our friendship,” Nadine said, echoing James’ sentiments. “My life changed because of the love I get from my family, friends and, of course, from James.”