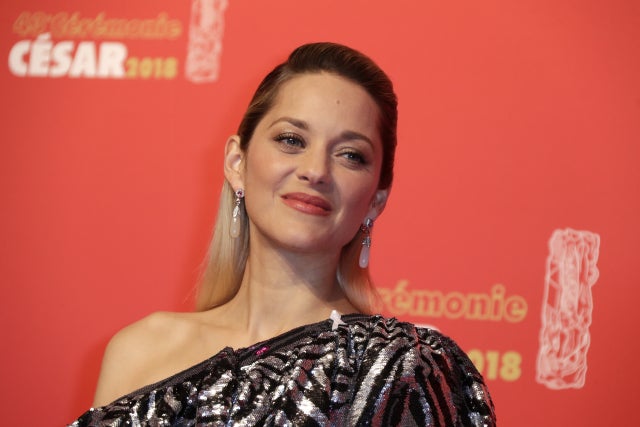 Stars including Marion Cotillard wore white ribbons in protest at violence against women at the Cesars on Friday night. Image: Thomas SAMSON / AFP

Stars wore white ribbons in protest at violence against women at the “French Oscars” — the Cesars — on Friday night where “120 Beats per Minute, a powerful drama about AIDS activists in the 1990s, won best film.

The Cesars sparked feminist fury last year by inviting controversial Franco-Polish director Roman Polanski to preside over the awards before he was forced to pull out.

This year the global anger fuelled by the #MeToo movement took center stage on the red carpet in Paris with stars like Marion Cotillard and Penelope Cruz sporting white ribbons to condemn abuse and exploitation.

“Wearing a white ribbon, it will be a way for us, the French, to express our solidarity,” said French actress and producer Julie Gayet.

“I propose we act tonight, to get up, to show our white ribbons,” added the ceremony’s host, French comedian and actor Manu Payet. “I think it’s great that mindsets are changing, that women’s voices are being liberated, and that men are hearing some types of behaviors must be banished.”

Movie industries around the world have been rocked by tales of sexual abuse and harassment since the downfall last year of Hollywood mogul Harvey Weinstein over alleged sexual misconduct.

Dozens of actresses and women working behind the scenes have come forward to speak out against abuse, often by powerful industry men.

Award ceremonies have since morphed into public protests with actors and directors at the Golden Globes and the British Bafta choosing to wear black to support the #MeToo campaign.

The Berlin film festival, which wrapped up at the weekend, also came under pressure to replace its red carpet with a black one in support of victims of sexual harassment.

The Cesar’s white ribbon protest was in stark contrast to last year’s award ceremony which was overshadowed by the invite for Polanski.

The veteran filmmaker — who has been accused of sexual assault by several women — is wanted in the United States for the statutory rape of a 13-year-old girl in 1977.

Alain Terzian, the head of the French Academy, said Franco-American actress and director Tonie Marshall came up with the white ribbon idea to support a French foundation that works to stop violence against women.

Marshall remains the only female director to have won the best director gong at the Cesars for “Venus Beaute” back in 2000.

Only one of the seven nominations this year for best director was for a woman: Julia Ducournau for “Grave”.

In the end that gong went to Albert Dupontel for “Au Revior la-haute”, an adaptation of a Pierre Lemaitre novel about the friendship between two World War I soldiers.

Jeanne Balibar took home best actress for her performance in “Barbara” while Swann Arlaud was awarded best actor for his role in “Petit Paysan”.

Politicians joined stars in calling for equal opportunities and pay for women in films.

French Culture Minister Francoise Nyssen said film producers had a huge “responsibility to fight stereotypes, discrimination and harassment” both on camera and behind it.

“No matter who we are dealing with, we cannot have any tolerance or complacency about unacceptable behavior,” she added.

Nyssen was also highly critical of how few films directed by women get made.

“Certainly we have made some progress in recent years, but it is still not acceptable that there are fewer women film-makers, that they are less visible and less supported” than their male counterparts, she said.

“In 42 years the Cesar for best director has only been won once by a woman,” she added.

She said only one in five feature films subsidized by the French state every year are made by women.

The situation is Hollywood is even worse, with only seven percent of the top 250 films in 2016 directed by women. NVG