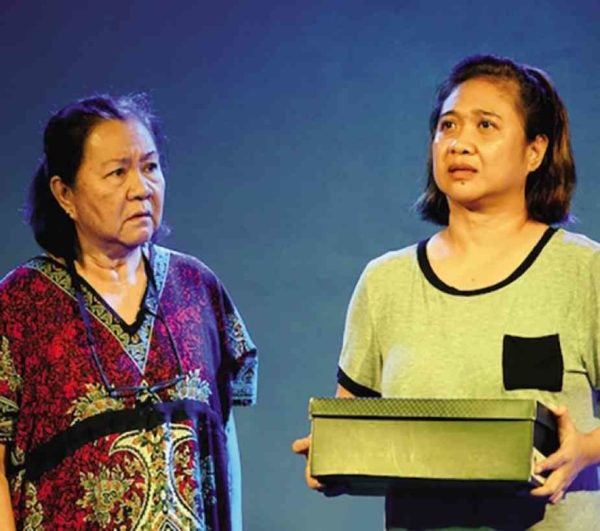 Our occasional columns on stellar career development encourage show biz luminaries to not take their established popularity for granted, but to make it a point to periodically come up with unexpected and thus “surprising” career moves and gambits.

Most recently, that proactive thrust was best exemplified by comedienne and TV program host Eugene Domingo’s decision to suddenly “go dramatic,” by way of her intense portrayal of a suicidal woman in Marsha Norman’s searing play, “’Night, Mother,” at the Peta Theater Center this month, with Sherry Lara playing her mother, who tries with similar unction to keep her from ending it all.

The dramatic gambit was so unexpected that it had the desired, bracing and exciting
effect of making viewers see Eugene’s performing persona in a less “categorizable” light.

Yes, Eugene has found fame and fortune as a TV-film comic, but the fact that she was theater-honed makes people confident that she has what it takes to not just pass muster as a dramatic actress, but to also come up with a moving and memorable performance.

Eugene’s radical shift in tone, image and thrust is also an excellent reminder of the importance of the “degree of difficulty” factor when a star decides to temporarily “change image” for artistic and career purposes.

If you’re going to do it, do it to the max—and choose a performance piece that will test your creative and thespic resources to the utmost!

That’s what “’Night, Mother” provides for its two leads—so, even if Eugene doesn’t come up to thespic snuff in it, the attempt itself should be cause for special attention—and celebration!

Another key factor is the star’s choice of performance to act with. The focus should still be on the main luminary, but the coperformer should be good and even great enough to help bring out the best in her.

Since Sherry Lara has hit thespic homeruns in past productions like “Death and the Maiden,” “Heremias,” “Care Divas” and “Crying Ladies,” she’s an inspired choice for Eugene’s coplayer
in the Filipino translation of Norman’s seminally searing play.

We hope that Eugene’s decision to stretch her creative limits will motivate other veteran talents to “surprise and excite” viewers by similarly biting into something new and fresh, with the potential result of taking their own careers to the next level.

Likely “candidates” for the big, bold move include Zsa Zsa Padilla, who’s outstanding at everything she does, but has yet to be given a performance showcase that excitingly affirms the full range of her amazingly versatile talents.

The showcase for her need not be a big, expensive production—just an intimate musical-drama-comedy gem that will give her the opportunity to show the range and depth of what she’s truly capable of.

We also hope and pray that another intimate performance showcase can be whipped up for the durable and iconic stellar couple, Barbara Perez and Robert Arevalo.

In their instance, a two-character thespic jewel about love that lasts a lifetime would be a moving and memorable experience for viewers to savor—and celebrate!