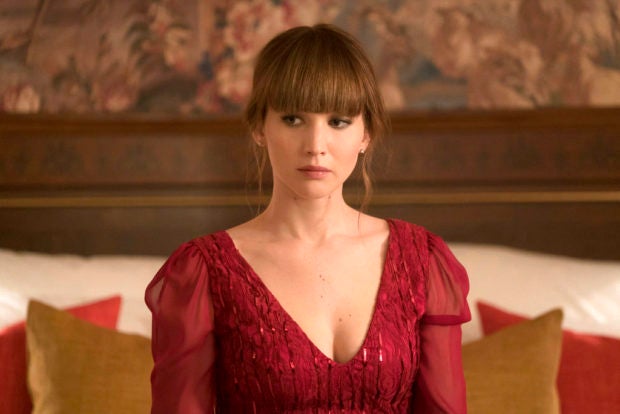 In the James Bond films, sex with a globe-trotting spy seems to be fun, fun, fun. A martini, a tuxedo, a witty line or two and then it’s off to a luxurious bed with two tanned, muscular bodies. Not so in the new thriller “Red Sparrow”, where the sex is cold, ugly and often violent.

Francis Lawrence, the director of the last three “Hunger Games” films, reunites with Lawrence for more adult fare but one likely to be remembered more for the outdoor junket photos of Lawrence in a thigh-slit dress in chilly London while her male co-creators wore coats.

Based on a book by former CIA agent Jason Matthews, “Red Sparrow” stars Lawrence as Dominika, a Moscow ballerina who has to rethink her career after a devastating injury. With the advice of her high ranking spy uncle, she goes to a “sparrow” school where the students are taught to use seduction as their main weapon.

“Every human is a puzzle of need,” the stern headmistress played by Charlotte Rampling tells her recruits. “You must become the missing piece and they will tell you everything.”

Dominika isn’t buying it and later complains to her uncle, “You sent me to whore school.” But she’s going to do it — forced to perform sex acts in front of the class — to pay for her sick mother’s care, so that gets her conveniently off the hook morally.

Our heroine is soon unleashed onto the world, a little like Luc Besson’s “La Femme Nikita” but without that film’s visual coherence or empathy. (Lawrence does sport awesome bangs, so there’s that).

Lawrence as an actress gives her all here, from learning ballet — daily, three-hour rehearsals for three months — to adopting a Russian accent that seems swiped from Natasha from “Rocky and Bullwinkle.” (“I haf to ko avay vor a vile,” she tells her mom).

But what really drives Dominika is never very clear, how she goes from a tea-drinking dancer to someone perfectly happy caving in someone’s head with a cane. That’s partly so viewers don’t know where her loyalties lie and will stay intrigued, but she gets lost in what could be a double-cross or triple-cross — or, if you’re in withdrawal from the Olympics — the infamous quad-cross.

Soon you just don’t care. “We can’t trust a word that comes out of her mouth,” one character says of Dominika and he’s right. No trust, no care. She’s like a reflection of the film itself, getting flatter and more boring by the minute. As a sign of how lost the filmmakers get, a scene about whether or not a false drawer will open becomes the most thrilling element for a good 30 minutes.

In addition to Rampling, there are fine turns from Jeremy Irons, Douglas Hodge and Mary-Louise Parker (who nevertheless seems to be in a different film altogether.) On the other side, one of the worst casting decisions was making Joel Edgerton Dominika’s love interest. He’s a puppy dog next to her tiger and there are simply no sparks between them.

“Red Sparrow” takes place in the languid, rich air of old European capitals and it gains no energy from the mostly — and curiously empty — high-end restaurants, hospitals and swimming pools. There are gorgeous exteriors of Vienna, Budapest, London and lush hotel interiors. The soundtrack is Tchaikovsky and Mozart. It’s like an extended ad for Chanel, except for all the gore.

Gore? Oh yes. There are two rape scenes, several instances of torture — one with a hospital-grade skin peeler — public and naked degradations, a gross garroting, a dead body in a tub with its head in a plastic bag, and more than a hint of incest. The bloodiness in juxtaposition with the bloodless high-end luxury is jarring — but not in a good way.

Courtesy of screenwriter Justin Haythe, the cliches are all here, from the matching sweatsuits the sparrows wear as they jog on their snowy campus to watching spies wordlessly pass packages in dark and empty parks. A hand-off of political prisoners is staged on an airport tarmac at night, complete with snipers, flashing police lights, enough troops to invade Belgium and the overly dramatic walk each person takes toward freedom.

This is a film in which interrogators coolly demand confessions in clipped European accents. It’s where a demented torturer lovingly unrolls his bag of evil tools like a contestant with a knife roll on “Top Chef.” Then he intones: “Do you know how long it takes to peel skin from a human being?” (Spoiler alert: “Hours and hours.”)

Come to think of it, that might be more fun than sitting though “Red Sparrow.”