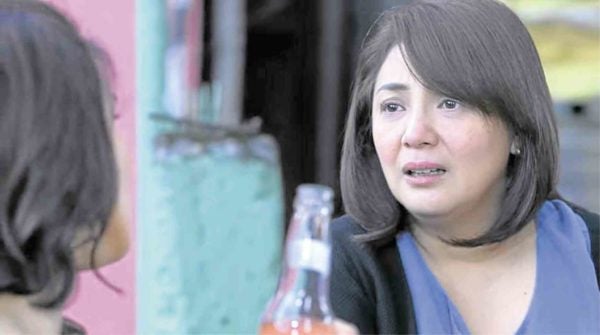 I’m the most powerful mother in Philippine television,” declared actress Cherry Pie Picache, “because I’ve given birth to two sets of triplets.”

Cherry Pie, who is part of ABS-CBN’s new drama series “The Blood Sisters,” was referring to her character Adele who is mom to Agatha, Erika and Carrie, all of whom are being portrayed by lead star Erich Gonzales.

“People might think that with the technology now, it’s a lot easier to come up with episodes for a teleserye that has one actor playing three different characters. The truth is, it has become more tedious and difficult,” the actress told the Inquirer.

Before, directors differentiate characters by merely zooming their cameras in and out, she observed.
“These days, we make use of hi-tech cameras that have different lenses, which need to be changed for close-ups and long shots. That takes a while,” Picache explained. “It’s doubly difficult for Erich. That’s why I commend her for her hard work and patience.”

She added that unlike Claudine, whose characters didn’t meet face-to-face until later in the series, Erich’s characters will know one another as early as the program’s second week.
“It was still easy for Claudine during the first few months because the stories of each of her characters unfolded one by one; while with Erich, things are happening all at the same time.”

Director Roderick Lindayag, who is collaborating with Jojo Saguin in this series, added: “Claudine changed her wigs, and that was it. Here, Erich is made to create a different personality for each role, so you can imagine the effort she is giving for this show.”

Cherry Pie was all praise for Erich, whom she would often find sitting in a corner memorizing her lines.
“It’s been a long time since I’ve worked with a young actor who does her homework—I didn’t expect that from Erich. After a while, I felt challenged. I said I also have to prepare, since Erich would always come to the set ready.”

Asked for pointers for aspiring actors, she said: “We create hundreds of celebrities each year, but not all of them end up being actors. To be one is a calling. You have to be humble and honest enough to recognize whether or not you have that gift in you. Good looks alone will not make you survive in this industry. You have to have the passion for acting.

“Don’t feel entitled. I get disappointed with young talents who arrive on the set then ask, ‘Direk, anong gagawin ko?’ You have to show respect to your coactors and directors, whom I consider captains of the ship.”